Previous issues of the Lantern

The right recipe for resilience

How humans adapted to living in one of the harshest climates on Earth and what can we learn from them.

The Kuril Islands are not exactly what you would call home sweet home. This string of islands in the Pacific Ocean between Russia and Japan experiences frequent earthquakes, volcanoes and tsunamis. It is arguably one of the most difficult environments to live on Earth — with long and harsh winters and a summer fog so dense it is nearly impossible to see. Still humans called this location home on and off for about 7,000 years. [caption id="attachment_8081" align="alignright" width="350"] 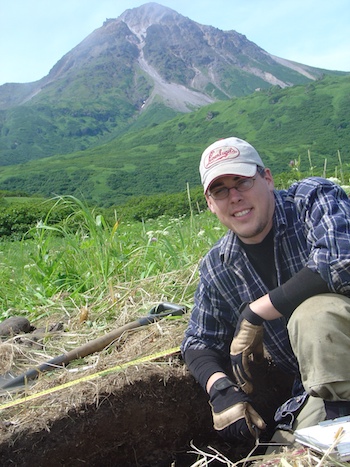 Erik Gjesfjeld, ‘02, who earned a degree in archaeology, now holds a prestigious, post-doctoral fellowship at the University of Cambridge, England, where he conducts resilience-related research while inspiring the next generation of archaeologists.[/caption] The question that keeps UW-La Crosse alumnus Erik Gjesfjeld awake at night is: 'how?' What made humans so resilient to withstand major environmental pressures, and what could we learn from them today. Now working from his office at Cambridge University, Gjesfjeld, a Renfrew Fellow at the McDonald Institute for Archaeological Research, says he has been pondering variations of this question since he took a UW-La Crosse archaeology class about 20 years ago. Back then, he didn’t know if he’d major in history or sociology, or maybe even the natural sciences. Gjesfjeld, ’02, distinctly remembers that class helped him see how his diverse interests could mesh together. He recalls James Theler, now professor emeritus, giving a lecture on the decline of the Hopewell tradition, a Native American culture that flourished near rivers in the northeastern and midwestern U.S. The end of their mound-building ways about 500 years ago piqued Gjesfjeld’s interest, and was an aha moment related to the appeal of a career in archaeology. “It sounds simplistic, but it finally clicked for me,” he explains. “I know not all students have that opportunity, but I was thankful I had that.” Today Gjesfjeld’s research explores similar questions to the decline of the Hopewell. He aims to better understand the resilience of past populations and learn strategies we can use today to manage environmental change. Not long after graduating from UWL, Gjesfjeld began graduate school research at the University of Washington. As part of the Kuril Biocomplexity Project, he investigated how populations that inhabited the Kuril Islands could have adapted to living in such an extreme environment. He took three trips to the region, bearing dense fog and wind, to help with excavations and analyze pottery remains, alongside researchers from diverse disciplines. “It’s a tough place, but that’s what drew me to it — the extreme environment, how people could live there and why they wanted to live there,” he explains. The team learned that people did leave the islands at certain times throughout history, but their departures did not coincide with major environmental events.

"Having diversity is important. Whether we are doing that or not is a broader question for science and scholars in general."

They reconstructed exchange networks of people who lived throughout the island chain, and recognized that communities living in remote parts of the islands were well connected. They had networking strategies that provided them a social safety net to deal with the unpredictability of the environment. Along those lines, Gjesfjeld has learned that a big component of population resilience is diversity. Diverse social connections created robust safety nets. It was also important to have diversity of knowledge of food sources and the environment, as well as a diversity of technology — with the ability to adapt and innovate. “We see in a number cases when societies become too focused on any one type of crop or food or technology, it makes them vulnerable to environmental changes,” notes Gjesfjeld. As to whether our society today is diversified enough to handle one of the largest, ongoing environmental challenges — climate change —requires more heads than one, says Gjesfjeld. “Having diversity is important. Whether we are doing that or not is a broader question for science and scholars in general. These questions are far too complex to answer by a single discipline,” he explains. “What we [archaeologists] can do is contribute to those broader questions. We can give that long-term perspective that can contribute to policymakers and other scientists on how to view the information we have.” Gjesfjeld says engaging with scientists and thought leaders on these complex and important questions is what he loves most about his work. And that’s why he’s been devoted to these questions since the first archaeology classes that made him aware of them. “It is what I find most interesting and compelling, and it is what keeps me in archeology,” he says. Tim McAndrews, professor of Archaeology, saw Gjesfjeld at an international conference this past spring and learned of his prestigious appointment at Cambridge. “My greatest reward as an archaeology professor is to see former students go on to successful careers, and it's wonderful to meet them at conferences and interact as colleagues,” he says.