A story by the University of Wisconsin-La Crosse

Tina Yang sits on the living room floor watching her son play with a new toy. The light shines in through the big window as two-year-old Zayden dips the new wooden fishing pole onto the carpet and pulls up a brightly painted fish.

“How many did you catch today — one or two?” asks mom.

Zayden doesn’t answer. He stares wonderingly at the pole and fish that magically attach to it.

Tina is finishing high school, working part time and helping care for Zayden and her younger siblings. Sometimes it’s a lot to handle. But, in this moment, Tina is smiling. Seeing her son happy, “it makes me happy,” she says.

The fishing set was a handmade gift — cut out of wood, drilled and sanded — along with 49 others, crafted over the months of November and December. University of Wisconsin-La Crosse instructors, staff, students and others came together in garages, offices and even biology laboratories, after work and school, to make sure that kids get a bit more cheer this time of year. 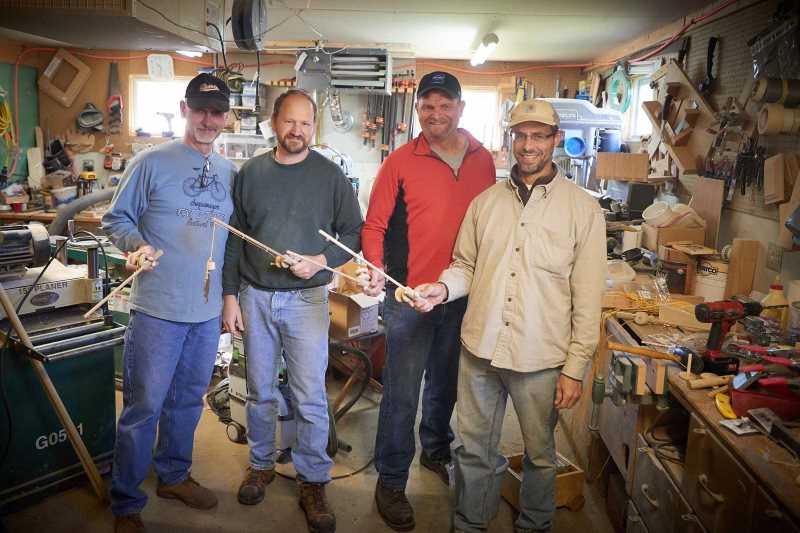 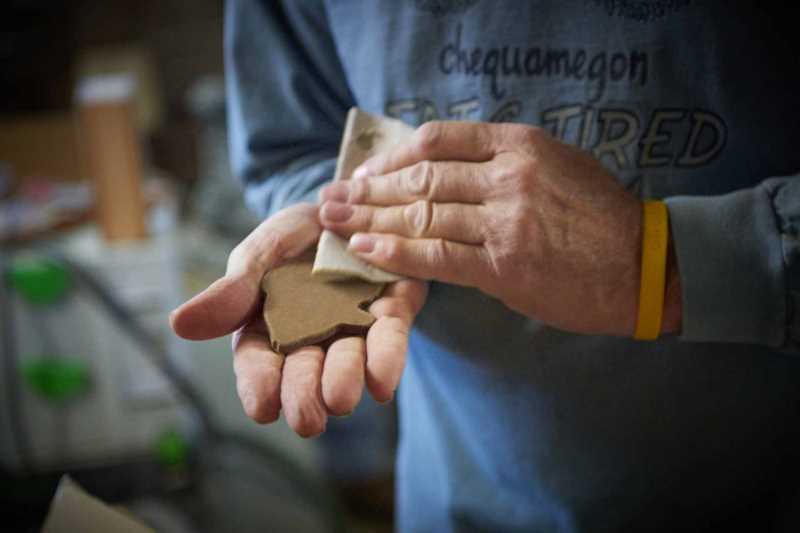 For 18 years university woodcrafters and others have made 900 handmade wooden toys for area kids.

Scott Cooper and Kurt Grunwald each grew up with the smell of fresh cut wood. Scott’s grandpa was a carpenter who taught him at a young age how to transform ordinary boards into objects that provided hours of enjoyment. The most memorable project was a toy race car they built together, which he played with on the hill of their driveway.

Kurt grew up on a farm with a small woodshop where his parents encouraged him to simply be creative with wood. That led to many projects and adventures for him and his brother. They attached one wood toy to a model rocket engine and launched it from a nearby parking lot to discover that it actually flew. Kurt says he always played with wooden toys more than the others. They were tactile, durable and meaningful.

His favorite was a barn with animals that fit inside. His great grandfather made it. One year his uncle built him a folding fence to go around it.

As Kurt and Scott grew up, they didn’t lose their passion for woodworking, but they found new ways to use it. 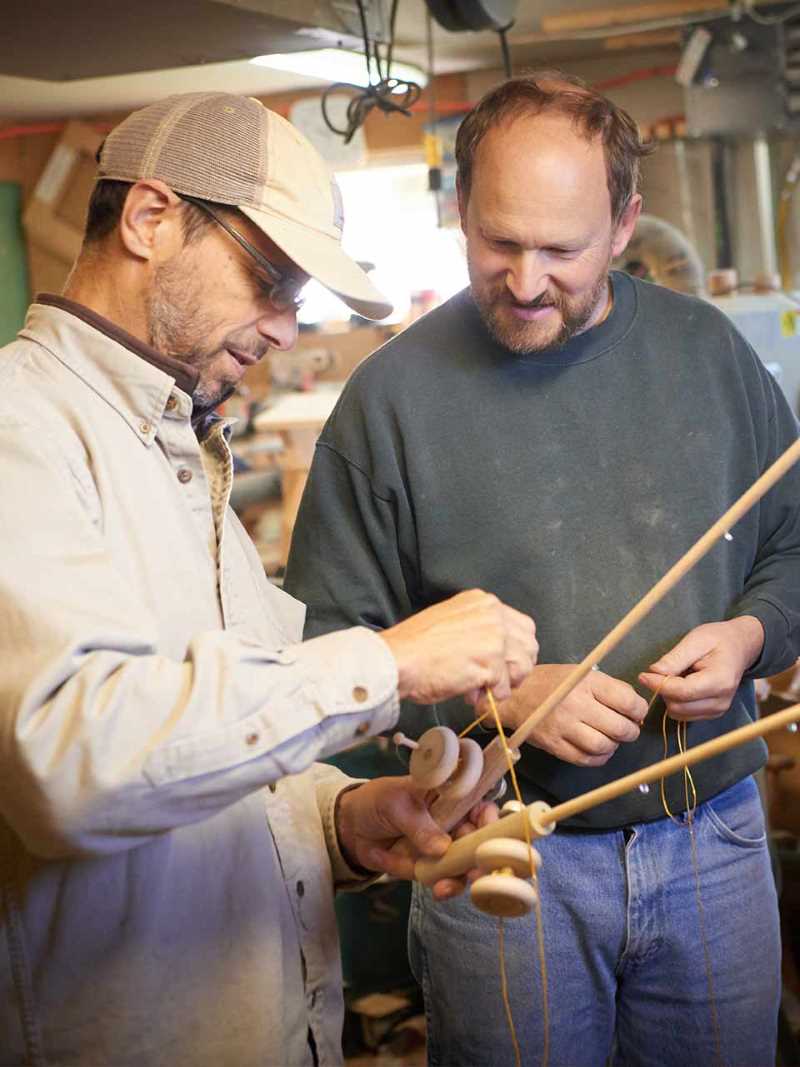 Scott Cooper, a UWL biology professor, thought it would be nice to build new toys for kids after seeing a pile of used toys no one had claimed at The Salvation Army during the holidays. Kurt Grunwald, UWL radiation safety officer, is pictured on the right. 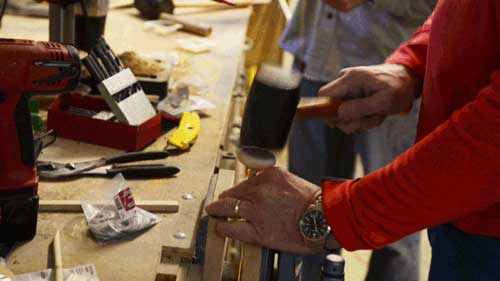 About 19 years ago they signed up with other co-workers at UW-La Crosse to fill holiday food baskets for families in need. While they loaded up boxes with food at The Salvation Army, they noticed a pile of mostly used toys and donated clothes on the floor that families could take. Most were left by end of the night.

“We thought it would be nice for kids to have a new toy that no one had played with before,” recalls Scott.

Kurt and Scott decided to build wooden toys and take them along to The Salvation Army the next year. At the time, Kurt’s children were young and they loved pull toys, so they decided to build 50 grasshoppers on wheels. They left the grasshoppers out during the annual holiday drive, and as kids and parents came in over the course of the evening, every grasshopper found a home.

The next year they built 50 dump trucks. The following year, they crafted 50 tug boats. They pulled ideas from kids toy magazines and their childhood favorites. The year they built a barn with a fence, Kurt’s grandfather and uncle’s craftsmanship were his inspiration.

A timeline of toys 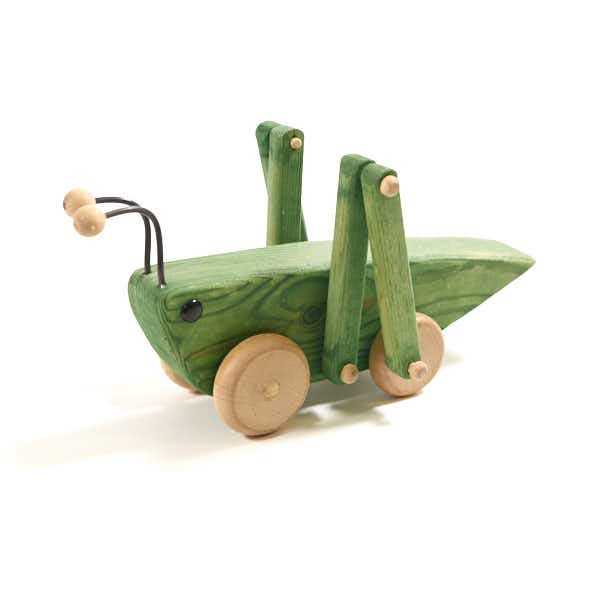 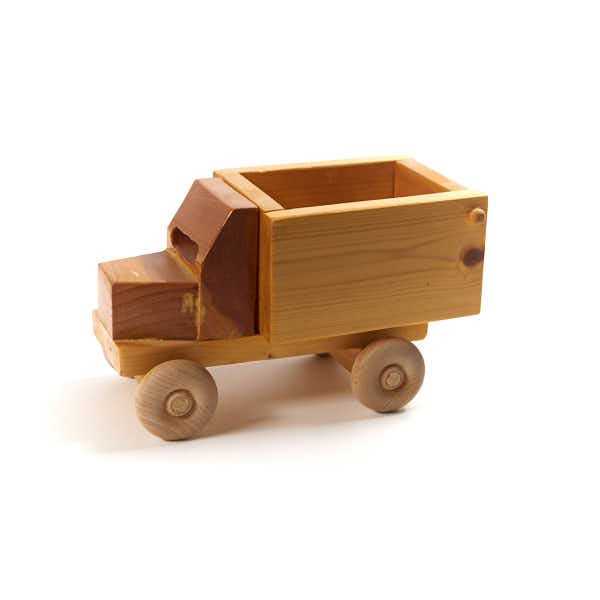 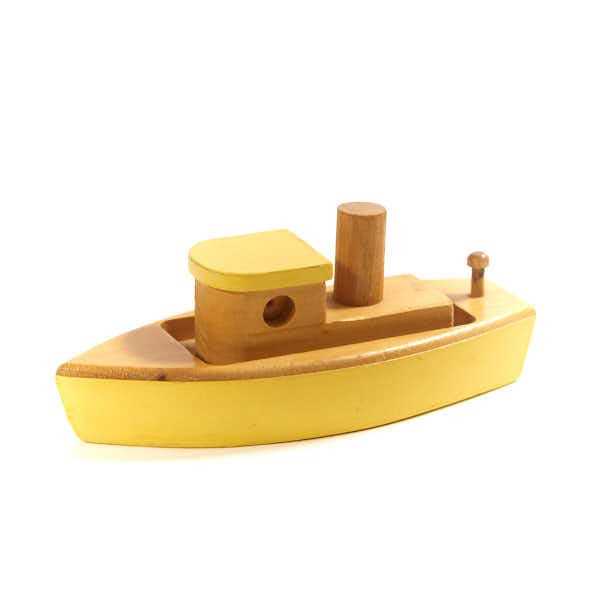 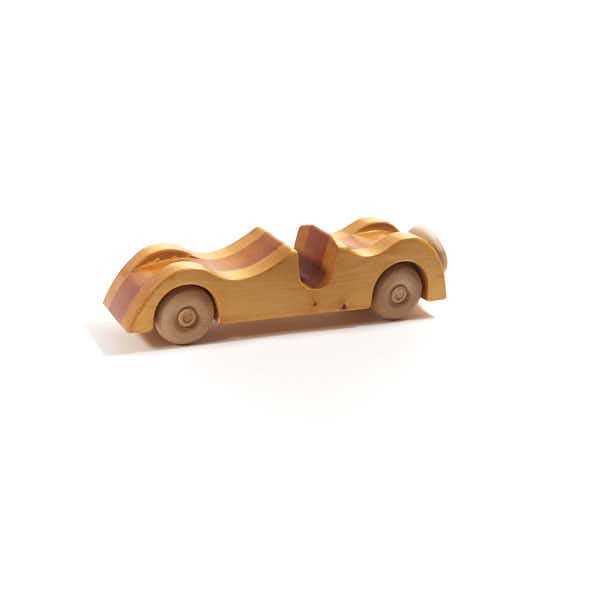 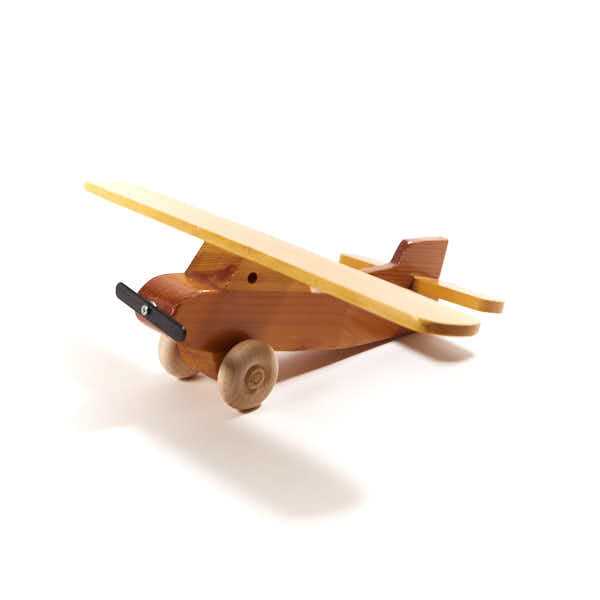 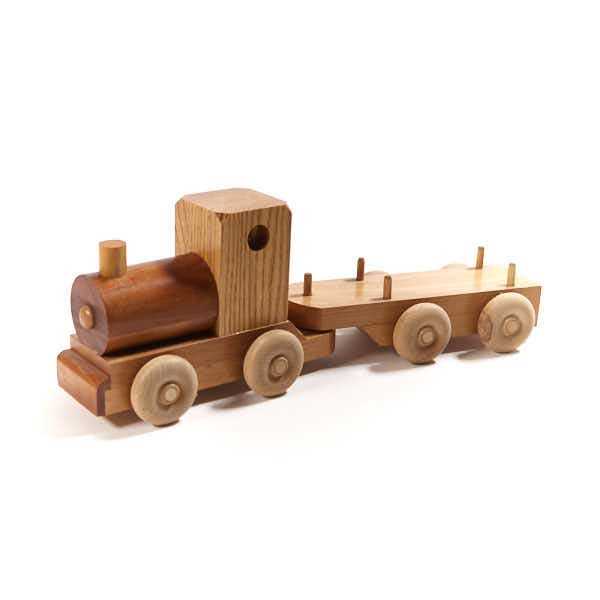 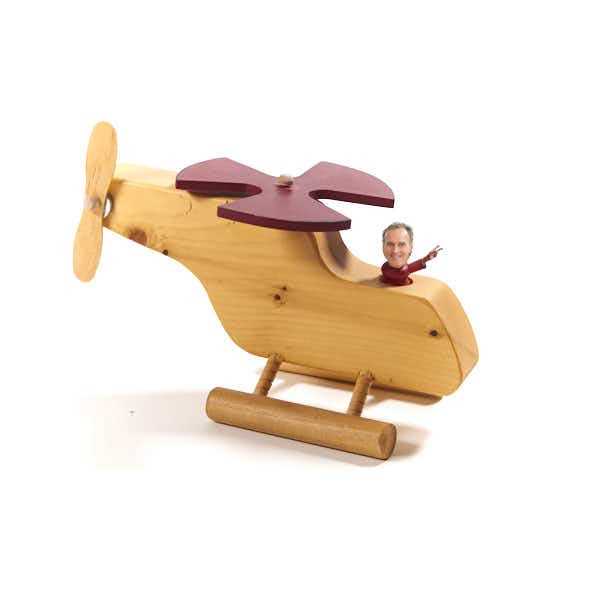 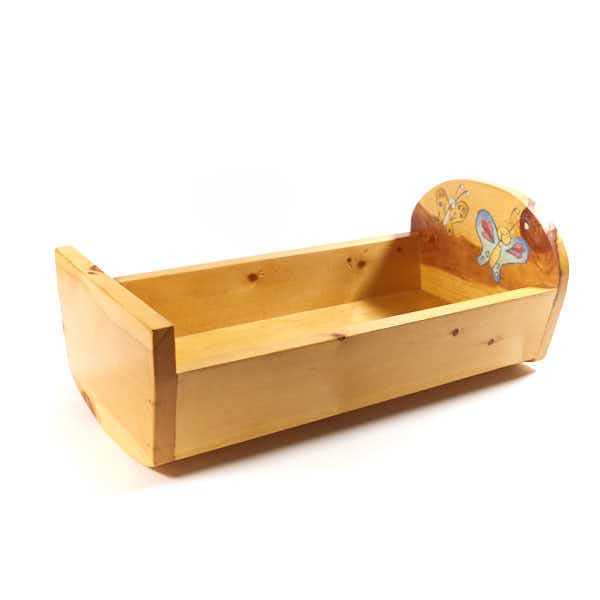 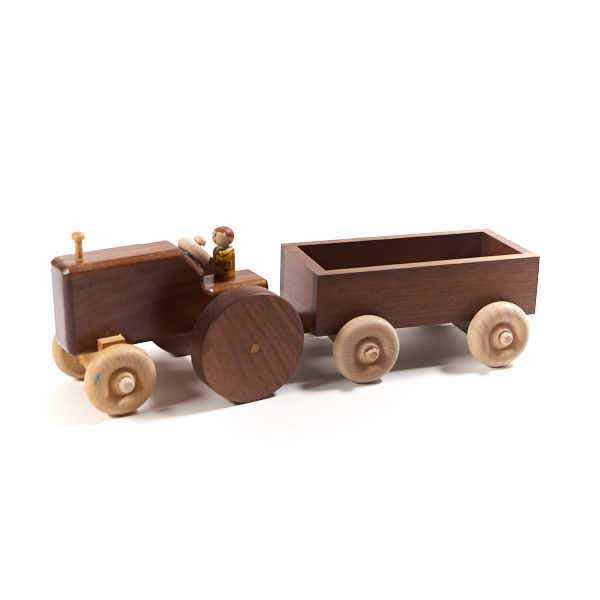 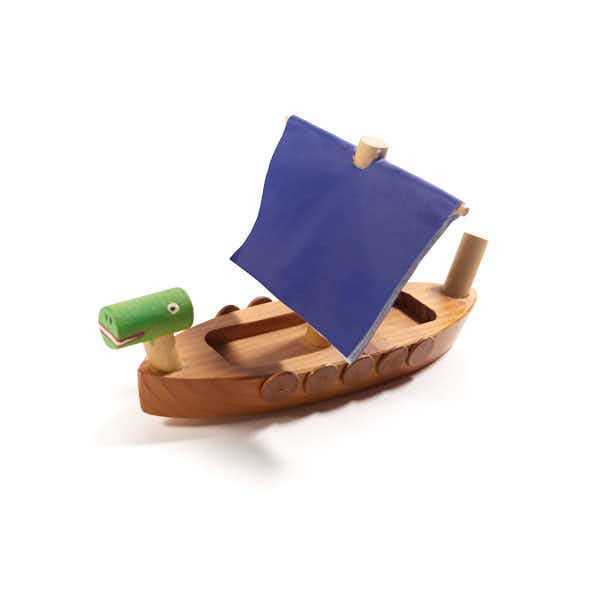 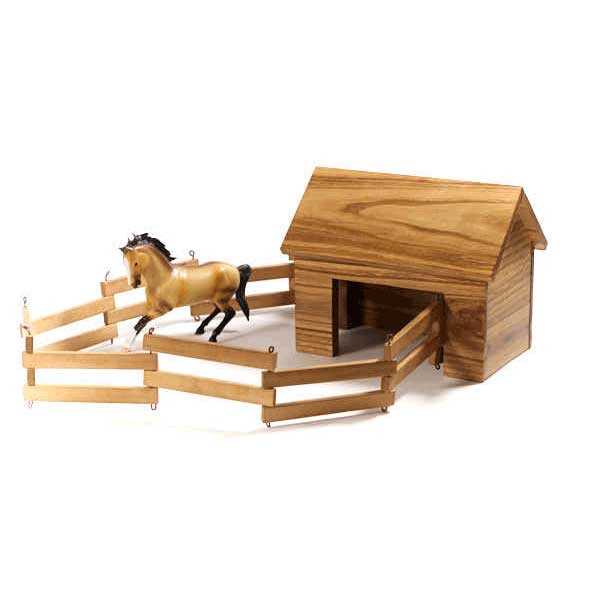 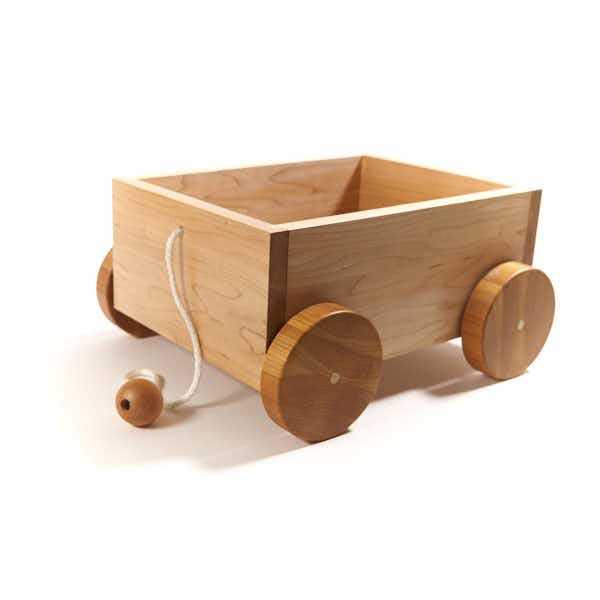 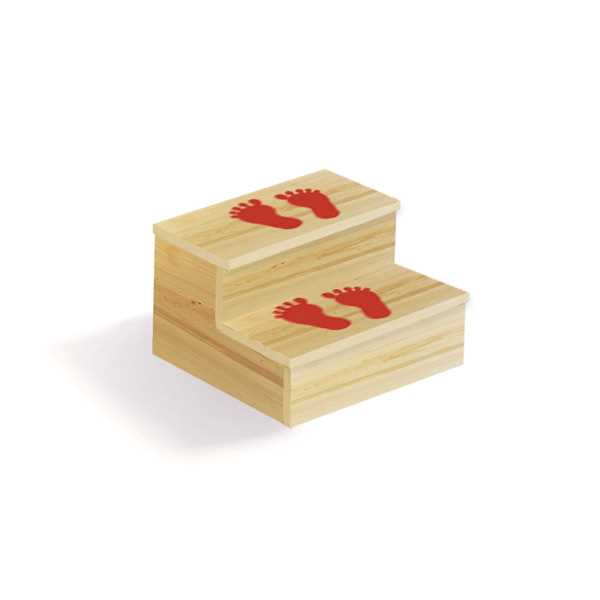 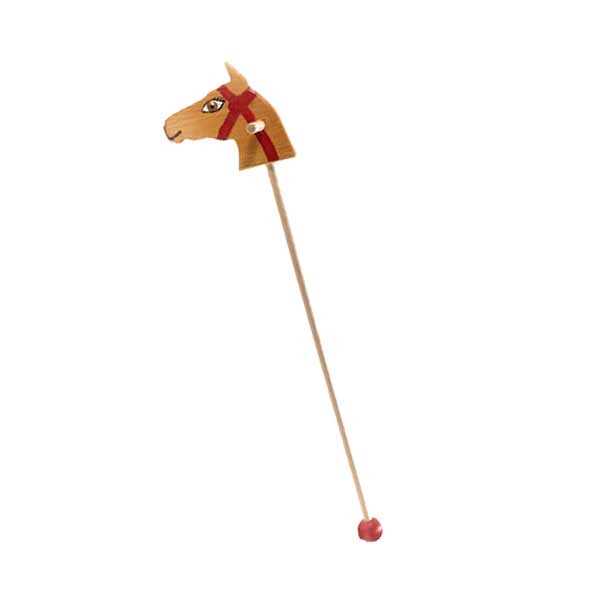 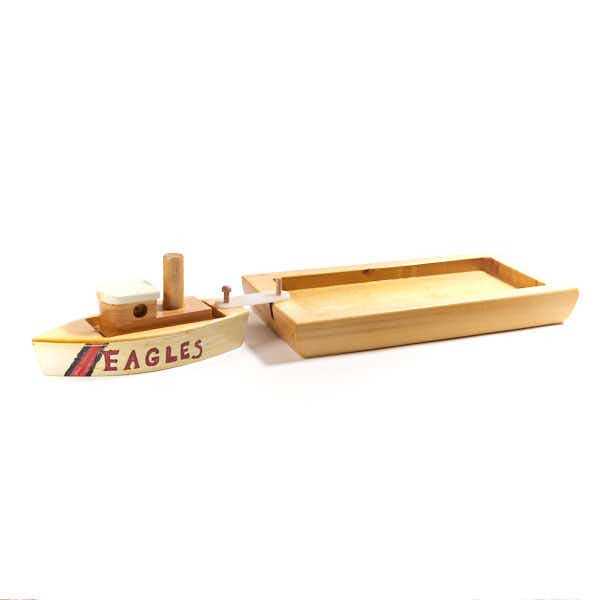 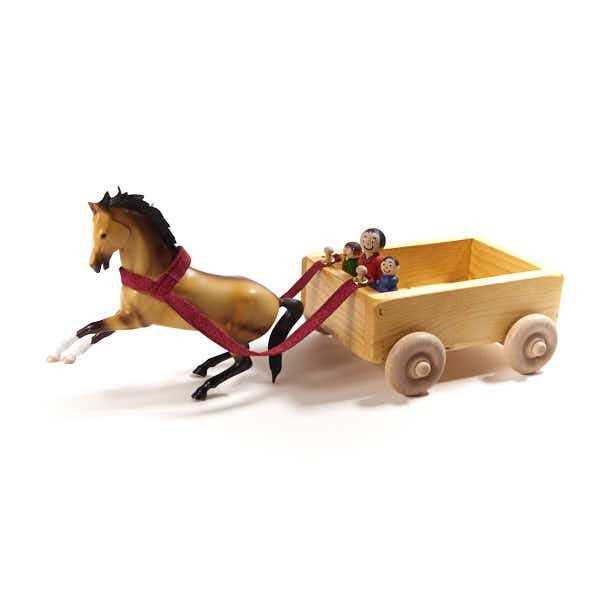 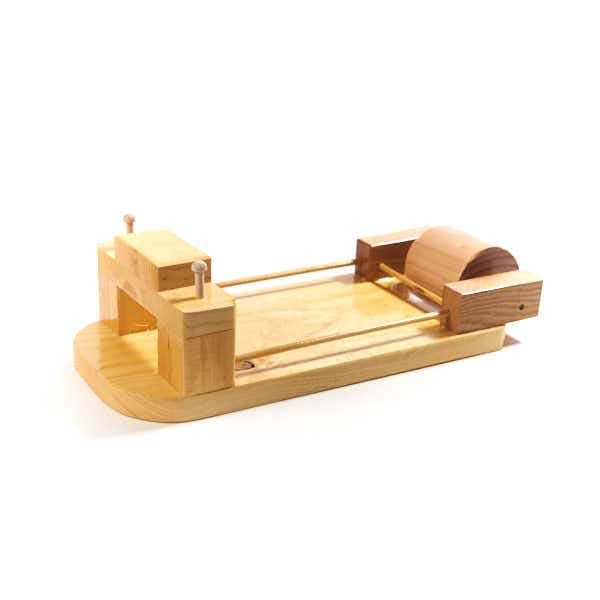 By the eighth year of building, they began to earn a reputation as “woodworking elves,” in their university department, and they recruited helpers. Three more woodworking elves joined, as well as an “accessorizing elf.” UW-La Crosse students helped paint toys, and they found a “distribution elf” to bring the gifts to families in need.

The process has become a holiday tradition for so many givers and receivers that Scott says he doesn’t see it ending anytime soon.

“I think there would be quite a few people disappointed if we didn’t do it,” says Kurt.

A look at the numbers

Toys donated to charities each year

The biology of fish

It’s getting dark outside the window of 305 Cowley Hall, but Scott’s biology lab is lighting up. College students trickle in the door. Some just finished midterm exams, and others are unwinding from a part time job. They seem at home now. They’ve grabbed snacks at the door and work their way to lab tables to meet friends. About 10 students stand around the room — now humming with conversation and laughter.

“We’ll be going pretty quickly once we get up to speed,” Scott announces. “It’s only 200 fish to do.”

Lab tables are supplied with red, blue and yellow paint on small plastic plates. The tables look a lot different than they did at 7 a.m. when students were just starting a day of scientific experimentation. Students in Scott’s lab are analyzing ground squirrel DNA. The grant-funded research aims to better understand how these animals stop their blood from clotting during hibernation, which could help advance treatment of human heart conditions and bleeding disorders. 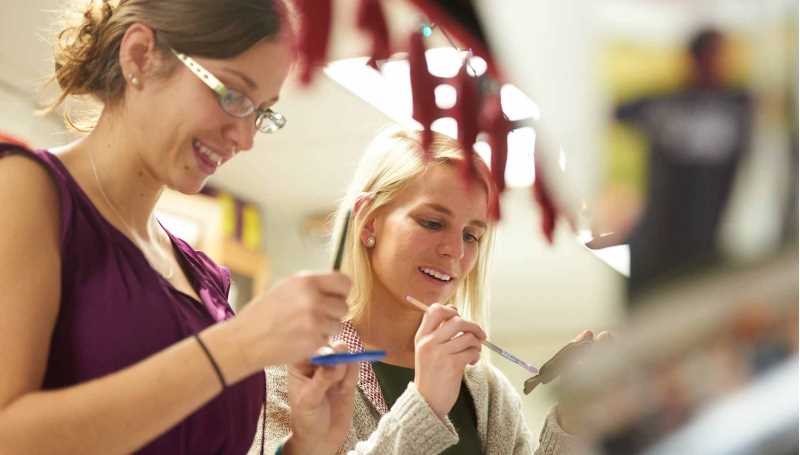 UWL graduate students Hannah Bergen, left, and Alie Bonis are two of the more than 180 UW-La Crosse student volunteer painters over the years. 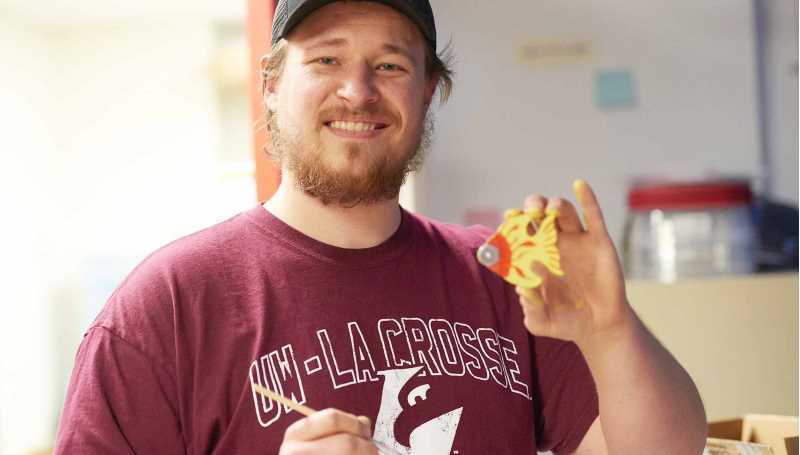 Junior Tanner Tenpas is a biology major and a part-time paramedic in an emergency room. While gaining undergraduate research experience in Scott Cooper's lab, he volunteered to help paint toys. 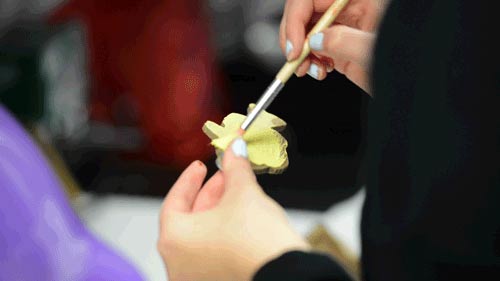 Students added their own artistic touch by painting a variety of designs on the fish.

Scott brings in anywhere from 20-30 students to partner with him each semester. UWL Junior Tanner Tenpas is one of those students. A part-time paramedic for an emergency room, he wants to go to medical school or do medical research after graduation. He thought undergraduate research would be an important skill to achieve those goals, so he asked to join Scott’s research team last year. 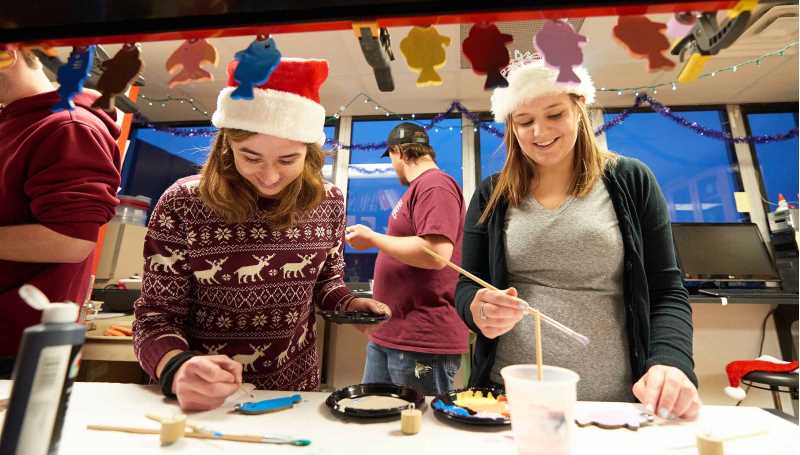 When the painting party was announced, Tanner decided to come even though he can sometimes be a bit of a grinch come the holiday season. He grows tired of hearing the same songs on the radio and seeing the mass consumerism in shopping malls. But this holiday project feels different, he says.

“Kids may not see the kind of care that goes into this, but I feel there is this deep compassion, holiday spirit that goes into handmade toys,” he says. “This kind of thing brings back the real reason for the season, I guess you could say.”

A doll for every cradle

Renee Redman, a senior lecturer in the UWL Biology Department, remembers the conversation she had with Scott in 2006. He and Kurt were building doll cradles that year — without any dolls. 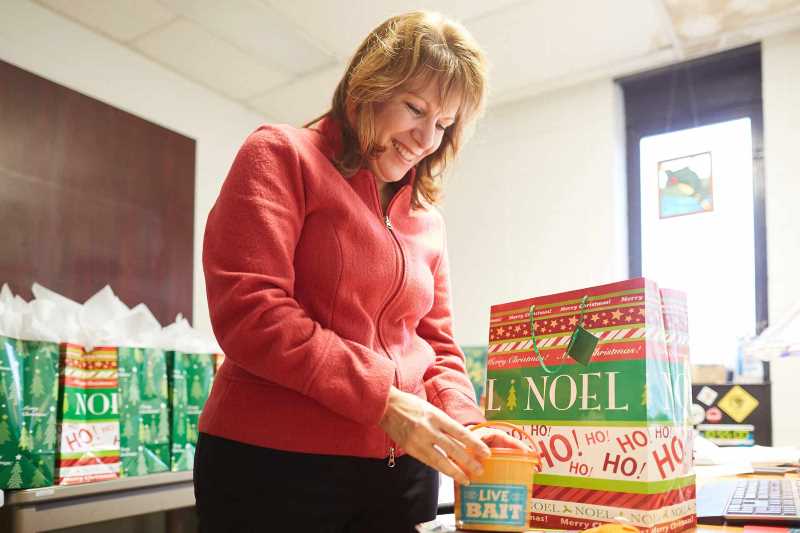 Renee Redman, senior lecturer in UWL’s Biology Department, is the official “accessorizing elf.” She got involved in the project in 2006 when she learned woodworking elves were building doll cradles without dolls.

Scott wasn’t sure how to do that. So, Renee went to stores and bought dolls for kids of all ages and left them in Scott’s classroom. It took about three days for him to learn that it was her.

“From then on, I was the one who organized this aspect of it,” she says as she sets toy fishing poles in gift bags. The large bags fill nearly all of the space in Scott’s small office.

“There is nothing better than to help a child who may not have a big Christmas.”

Renee is the official “accessorizing elf.” She comes up with the final touches for the gifts, whether sails for ships or animals for barns. Colleagues from across the Biology Department, as well as some other departments on campus, contribute either money for her to purchase the accessories or buy additional toys to add to the bags.

This year she bought a plastic bait bucket for the fish, and the Dr. Suess book “One Fish, Two Fish, Red Fish, Blue Fish.” She put everything in bright green and red bags.

“There is nothing better than to help a child who may not have a big Christmas,” she says.

Every child should have a gift

When Lori Furlano opens the screen door at a small stucco home on La Crosse’s Tyler Street, two-year-old Zayden is pacing about the living room floor, excited to see her.

Lori, or “Grandma Lori” as the family calls her, works at the Family & Children’s Center in La Crosse, in the Healthy Families program.

Zayden is fixated on what Grandma Lori is holding in her hand — a bright red bag. He grows even more excited to see her and jumps across the carpet. As she sets the bag on the floor and pulls out the fishing pole, his eyes are fixed. Then, she pulls out four bright, colorful fish.

“Fishy!” Zayden exclaims as Lori holds the fish to the pole now gripped in his small hands. Zayden dips the pole down and up, spinning the wooden reel. 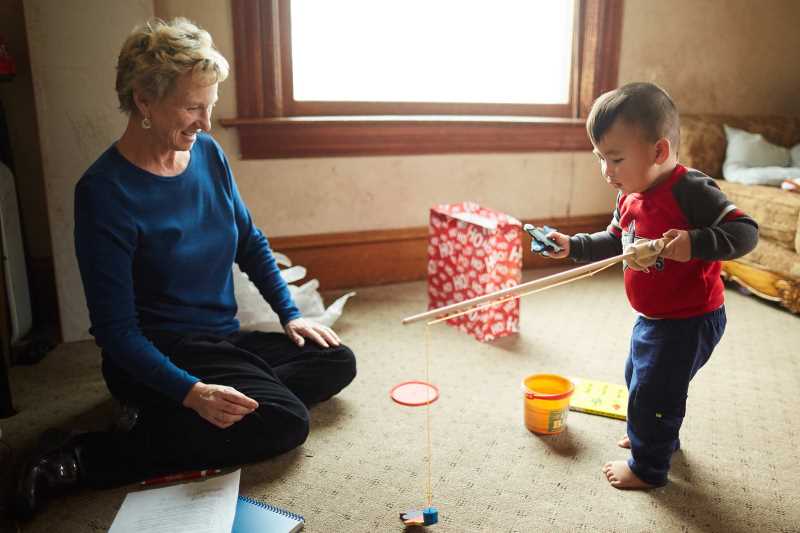 “He’s so happy,” Tina says as she watches him. “He loves fishing.”

Lori is “grandma” to a lot of little kids across the community. She visits parents who are raising children in stressful situations. Some are socially isolated because of language or cultural barriers. Some struggle with mental health issues, while others are surviving in poverty.

Lori graduated with a bachelor of science degree from UWL in 1996 and has been involved in social work ever since. She has that warm smile and calming voice that every kid, and sometimes parent, needs to know that everything will be OK. She connects families to community resources like education and healthcare. And come holidays and birthdays, she makes it her mission to give each child at least one gift.

One of her most memorable toy deliveries was the year she delivered a barn with folding fence to a three-year-old boy. “He looked at me and said, ‘I wanted a farm for my whole life!’” she recalls. “Who knows, maybe he’ll grow up to make toy farms for someone else some day.” 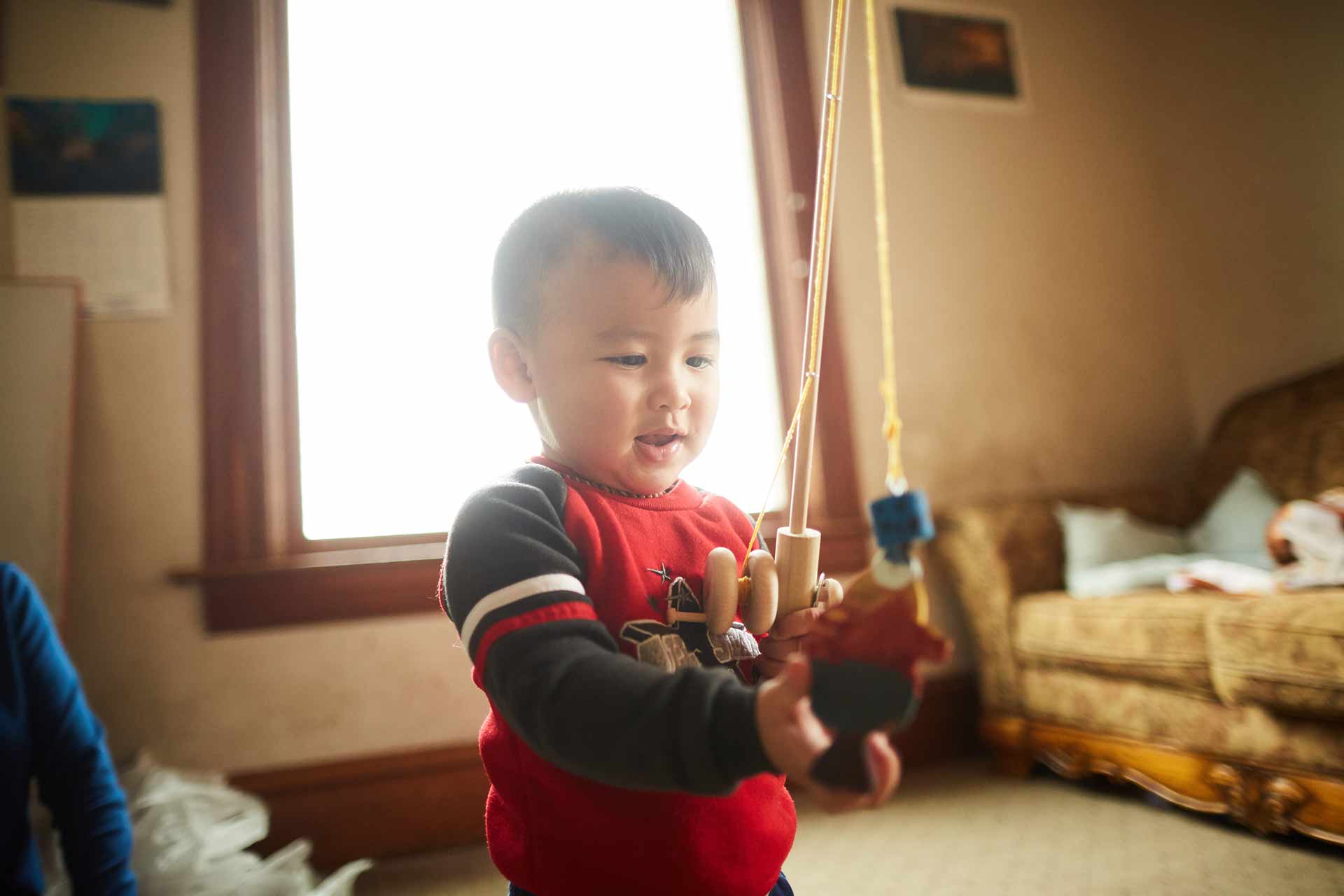 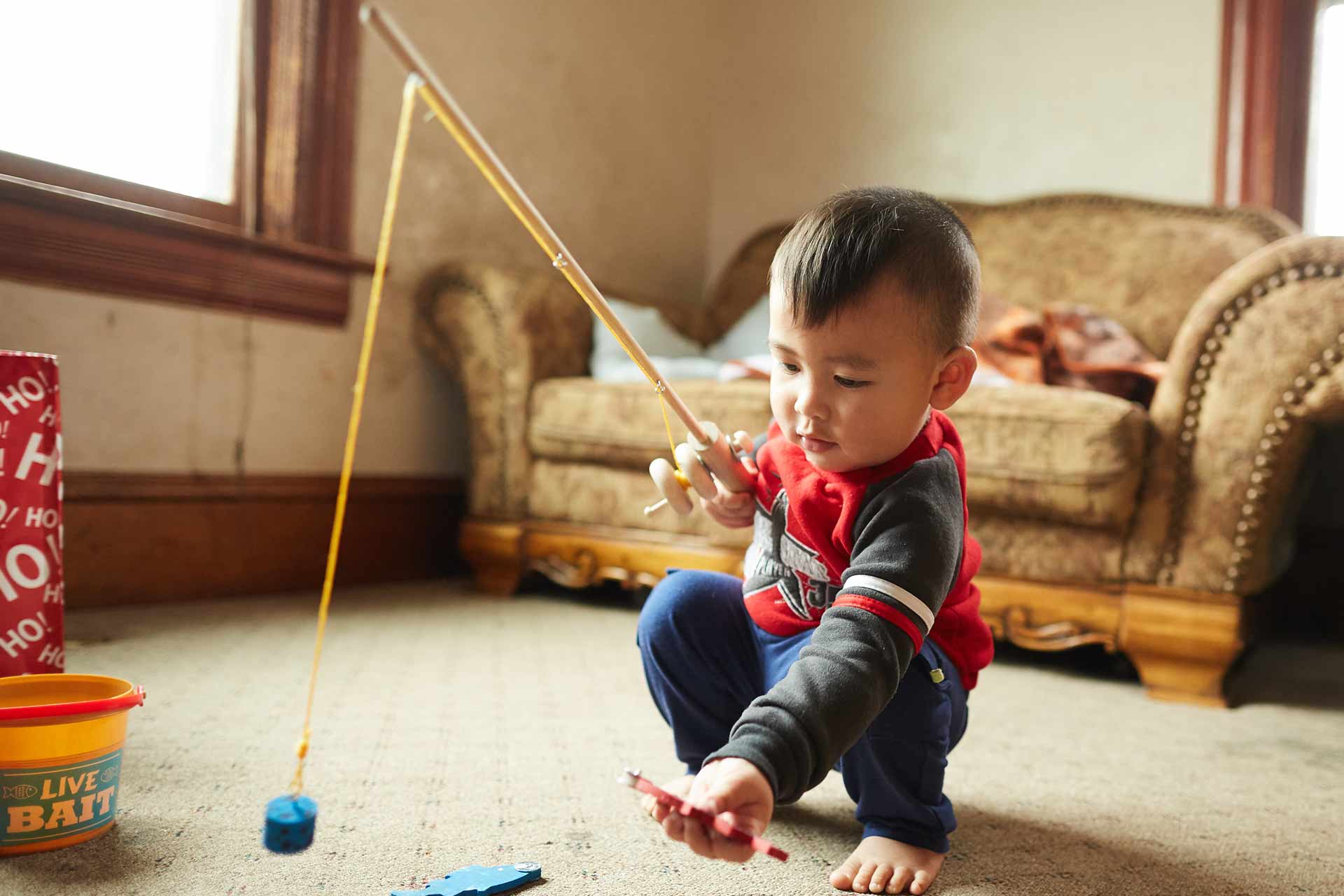 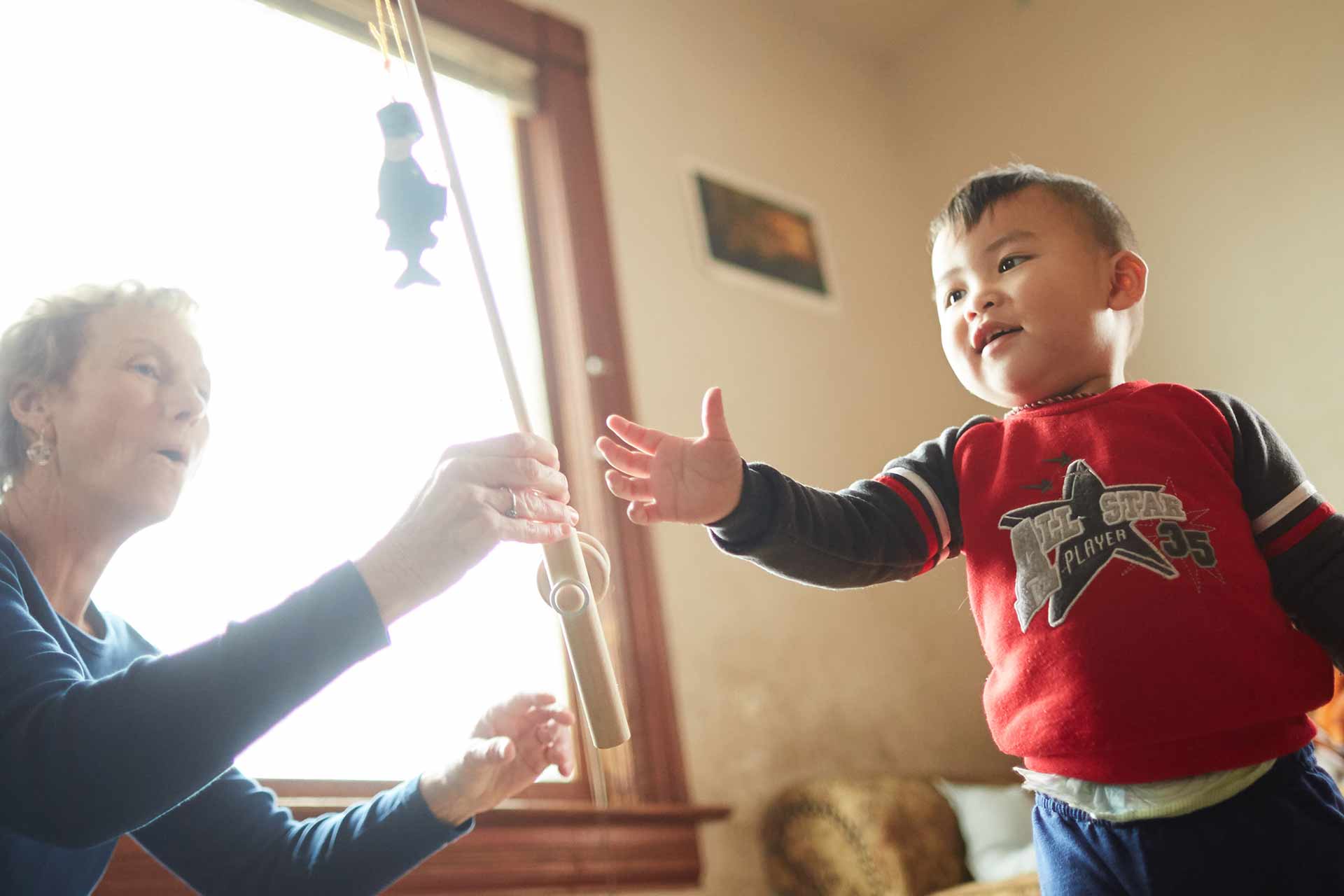 Want to help? Scott and Kurt have enough elves for their annual toy making project, but they say many other skills beyond woodworking could translate to great volunteer projects. Their project originated from a love for woodworking.