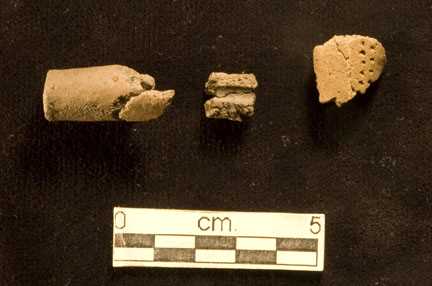 Clay Pipe These fragments of at least one grit-tempered clay pipe were recovered from several locations during 2008 excavations in the Sand Lake Archaeological District north of La Crosse, Wisconsin. They include the base of the stem, mid-stem fragments, and a bowl fragment (right). The stem base is flat and perpendicular to the orientation of the stem. The bowl fragment is decorated with parallel lines of small punctations. The specific affiliation of the pipe fragments is not clear, but they are likely from an Early-Middle Woodland or Late Woodland component.