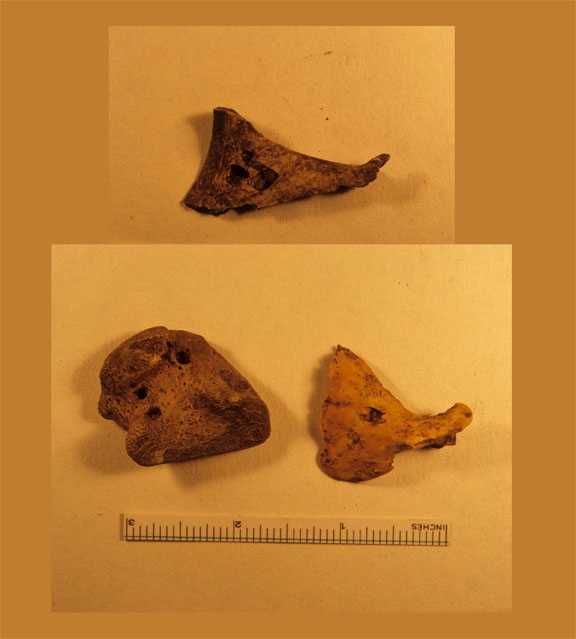 Dog modified bones Origin and Timing of Dogs in North America*
Recent genetic evidence indicates that dogs were likely domesticated from a wolf ancestor some 17,000 years before the present (YBP) in Europe or East Asia, and were widespread in the Siberian-Bering Land Bridge area from 16,000 to 12,000 YBP. It now appears that dogs were not domesticated in North America and that there were two or possibly three different introductions to the Americas. Dogs may have accompanied Paleoindian peoples to North America 13,500 YBP, but the evidence for this is lacking. The earliest domestic dogs recovered at North American archaeological sites were found as burials at two sites in the lower Illinois River Valley, Stilwell II and Koster. Radiocarbon dates indicate that these dogs date to the Early Archaic period about 10,000 YBP. Both dogs were medium-sized animals that weighed about 30 pounds. Later domestic dogs (possibly from a different and later migration) on the Great Plains and the far north could weigh 100 pounds or more and probably served as pack animals and sledge dogs.

Functions of Dogs
Native peoples of the Americas, including those in Wisconsin, had a close relationship with the domestic dog (Canis familiaris). In the early historic era, dogs were numerous at Native villages and served many functions– as alarm systems watching for human or non-human intruders, as pack animals, and as aids in hunting. Generally they weren’t intentionally fed; instead they scavenged refuse and stored nutrients by eating animal and plant debris humans wouldn’t consume. Dogs also served as a food source in some rituals (dog feast) or emergencies. They could also be a source of warmth during cold winter weather (the phrase “three dog night” is said to refer to indigenous Australian people sleeping with three dogs on cold nights).

Evidence of Dogs in La Crosse and western Wisconsin
Late precontact Oneota sites in the La Crosse area often have evidence for the presence of dogs. Skulls and mandibles of domestic dogs are found at many Oneota sites, and the skulls often exhibit “pool-cue” fractures indicating that the animal was intentionally dispatched. Cut marks on the mandible and long bones indicate butchering for consumption. Other animal bones found in refuse at the sites often show gnawed edges and tooth punctures presumed to be from scavenging dogs. Pictured are a bird bone (coracoid)(top), a cranial bone (pharyngeal arch) from a freshwater drum fish (lower left), and a lower jaw (dentary) of a buffalo fish (lower right) that were probably scavenged by dogs. When dogs ingested bone fragments, their digestive acids left them smooth and pitted when they were redeposited.

Dog Burials
The presence or absence of dog burials varies greatly through time and place in ancient Native American societies. No dog burials have been found at La Crosse area sites, yet in other areas, such as at Archaic sites on the Green River in Kentucky, dogs were often buried separately or with humans, and were sometimes accompanied with artifacts made by humans. One of the few dog burials reported in western Wisconsin was found in a Late Woodland mound (Mound 65 of the Raisbeck Group in Grant County).

*see
Perri, Angela, and others
2019 New Evidence of the Earliest Domestic Dogs in the Americas. American Antiquity 84(1):68-87.