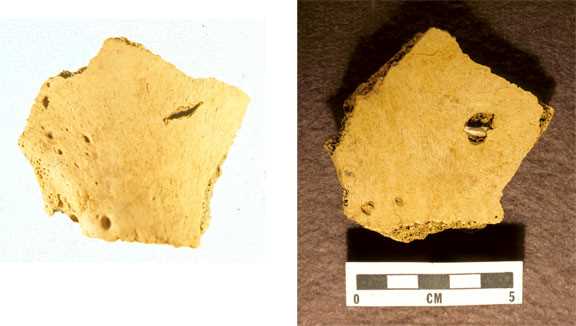 Elk Pelvis with Embedded Projectile Point Preston Rockshelter in Grant County, Wisconsin, was partially excavated by the late Harris A. Palmer and students from the University of Wisconsin–Platteville in the 1960s. Several thousand animal remains from the site were analyzed in the mid-1970s and recently published in The Wisconsin Archeologist*. Shown here is a portion of an elk pelvis (the left ilium) that was pierced by a thin chert projectile point, a portion of which is visible in the image on the right. The point appears to have entered from the left rear and shattered from the impact, leaving only the medial portion embedded in the bone. This specimen is from the Late Woodland Eastman phase (Effigy Mound) component at the shelter, and the point can reasonably be assumed to be an arrow point. Embedded projectiles are rarely found in non-human animal bones. In part, their scarcity might be due to fact that thinner bones of the vertebral column, ribs, and pelvis (those bones likely to “hold” a portion of a point) are seldom found intact. They were often pounded into fragments to extract the nutrient-rich bone marrow or destroyed by scavenging village dogs.

As a sidenote, Theler was once shown an example of a very nice, complete Middle Woodland point carefully embedded in the side of a goat skull. This was accompanied by an elaborate story about how it was found years ago during a construction project in downtown La Crosse.