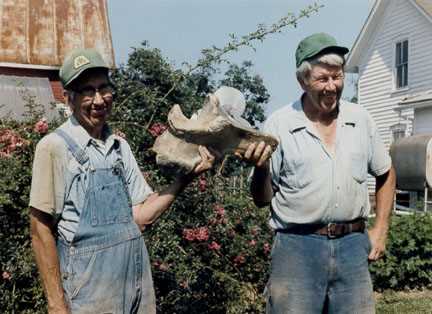 Mastodon Ulna John (right) and Otto (left) Swennes, often called the “Swennes boys,” were bachelor Norwegian brothers who lived on a farm in Long Coulee in northern La Crosse County. They were wonderful, cheerful, and friendly folks and welcomed all with good intent. I first visited the Swennes boys in 1985, when I wished to visit a rock shelter on their old farm in the Town of Medary. Most of that family farm was “lost” to the construction of Interstate 90 in the mid-1960’s. I called them, and they asked me to stop out to their Long Coulee farm. When I arrived, they invited me into their house through a screened-in porch, with Otto in front and John behind. On a small table next to the door was strategically placed the mastodon ulna (lower front leg bone) shown in the photo. I stopped in mid-stride and said, “Holy cow, do you know what that is?!” With broad smiles and crossed arms they said in near unison, “What?” I said, “It’s the lower front leg of a mammoth or mastodon.”

When I checked some identification keys, the bone turned out to be from a mastodon, an elephant-like animal of the last (Pleistocene) Ice Age. They had found it after a period of flooding in Halfway Creek, which ran through their farm. Ernie Boszhardt and I later searched the creek, finding nothing. John and Otto told me they had taken the ulna to their veterinarian to ask what it was, and he told them he thought it was from a large horse. I suggested they get a new vet. In the 1980s the Swenneses still had and worked Percheron horses, and they couldn’t figure where that bone would go!

John and Otto became friends to me and MVAC, and hosted digs at an Oneota site on their farm. They also allowed experimental over-winter caching of corn in Oneota-style storage pits. For years, they brought the mastodon ulna and artifacts from their farm to MVAC’s annual artifact show at the Valley View Mall. Before their passing, they generously donated the ulna to MVAC, where it is now housed. They also placed their land into a permanent conservation easement, working with the Mississippi Valley Conservancy to ensure preservation of both the farmland and its irreplaceable archaeological resources.