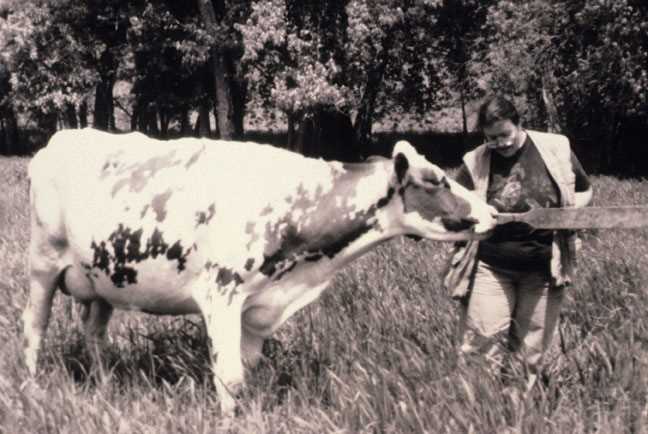 Cow by person shovel testing MVAC took part in Mn/Model, the Minnesota Department of Transportation’s project to help predict low, medium, and high-probability locations for sites. Many surveys are designed to locate sites, and therefore concentrate on examining places that are thought to have had human occupation. However, this biases results because areas thought not to have sites are not often surveyed; thus, the absence of known sites might be a result of absence of survey, rather than a true absence of sites. By contrast, Mn/Model surveyed a series of counties based on random samples of site locations, thus ensuring that the model was not biased. Random points were identified across a county, and survey was conducted of the 40 acres surrounding the point (the quarter-quarter section). To build a predictive model, places known to not have sites are just as important as places with sites, and the results are continually being updated with new information. Mn/Model allows a more explicit way to prioritize surveys required as part of NHRP Section 106 legislation. They also help to identify, early in the process, areas that have a high probability of having archaeological sites, making the planning process more efficient.

The Mn/Model website (http://www.dot.state.mn.us/mnmodel/) has detailed information on the development of the model, the nature of the sampling strategy for each year’s survey, and environmental factors that were most important for site location, with separate analyses for each archaeological region in Minnesota. There is also an extensive discussion on geomorphology and deeply buried sites.

During our survey, the locals were always helpful; here one of the resident cows assisted archaeologist Dain Martinek with screening.