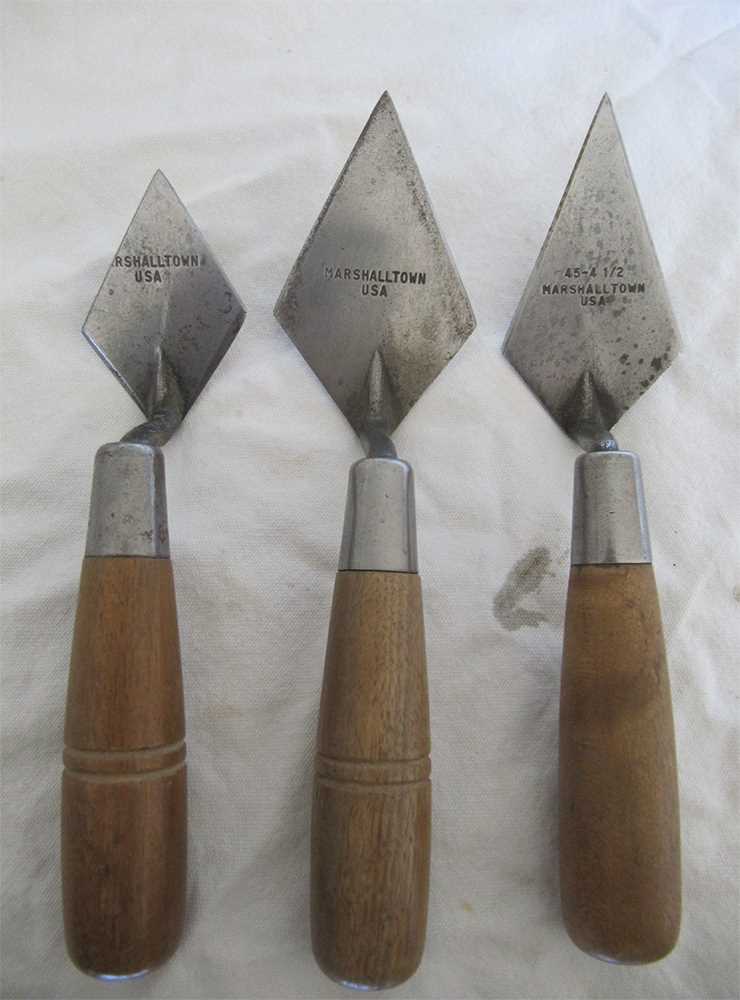 Marshalltown Trowels No tool says “archaeology” better than the Marshalltown pointing trowel—perhaps the most iconic, all-purpose tool in American archaeology. These trowels are nearly indestructible, forged from a single piece of high-carbon steel and fitted with a hardwood handle. Pointing trowels were developed for use by masons in spreading concrete and plaster. In 1890, two brothers in Marshalltown, Iowa, began to make trowels by special order, and the popularity of their trowels led to the incorporation of the Marshalltown Trowel Company in 1905. Archaeologists have long used the 4- and 6-inch trowels for many detailed aspects of archaeological excavations.

The Marshalltown trowels shown here are from the field kit of Jim Theler. The two on the left were gifts he received in 1971. They have double grooves or “bands” on the handle, a feature that appeared on Marshalltown trowels as early as 1927 and continued into the early 1970s. By 1974 the grooves were no longer added to the handles—note the plain handle on the trowel to the right. Today, one can purchase a 4-inch “Archaeology Pointing Trowel” with a holster from the Marshalltown Company, and trowels can now be had with various synthetic handles.

In addition to the excavation of features such as storage pits, trowels are most useful for “cleaning” excavation profiles (vertical walls) and “unit” floors. A brand-new trowel needs to have its convex edges removed and sharpened with a file, and most archaeologists keep a file in their toolkit to keep the edges sharp. Why are sharp edges needed? As Theler was taught in his first field school, one doesn’t “scrape” a floor or profile, one “cuts” a floor or profile. A sharp trowel allows the excavator to cut and peel away a thin layer of sediment and slice through rootlets without smearing the soil surface. The clean surface can then be examined for stratigraphy or the outlines of features. The small trowel on the left has been so reduced by endless resharpening that it is now retired.