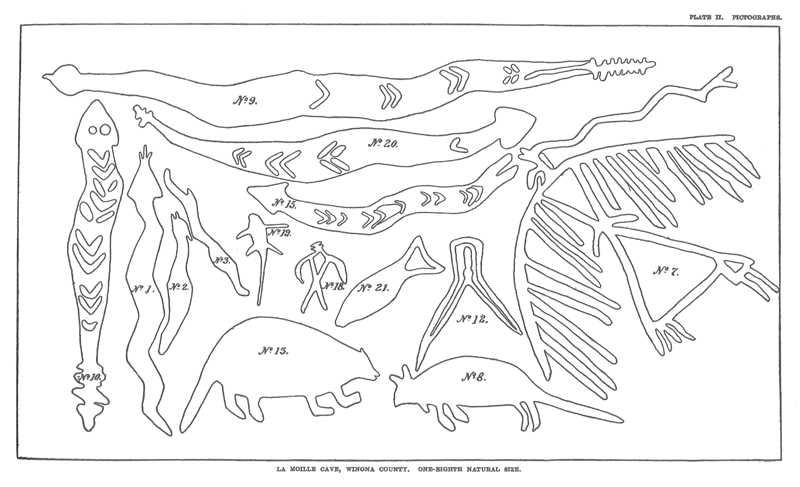 Drawing - rock art, snakes and other animals Early European travelers from the time of Louis Hennepin in 1680 frequently encountered timber rattlesnakes, especially along the rocky margins of the Upper Mississippi Valley as far north as the Falls of St. Anthony at modern day St. Paul/Minneapolis. Native Americans must have been on guard for timber rattlesnakes when on warm season resource trips into the rocky uplands of western Wisconsin.  In western Wisconsin prior to 1975, rattlesnakes were killed by the thousands for a bounty of $3 to 5$ per rattle. In 1964 and 1965 Crawford County, Wisconsin paid bounties on more than 10,000 rattlesnakes a year (Schorger 1967-68).

The trunk vertebrae of rattlesnakes have a particular bony structure that allows easy identification of these pit vipers when compared to other large bodied non-venomous snakes such as blacksnakes and bull snakes.  Based on the many tens of thousands of animal bones analyzed in western Wisconsin, there is no indication that snakes of any kind were used as a food item by regional precontact Native Americans. Snake vertebrae do show up in relatively small numbers at archaeological sites. At late precontact Oneota sites, bull (= gopher) snake vertebrae have been found, probably representing “natural rain” of a species that co-occurred with pocket gopher colonies that were once common on the La Crosse terrace. Bones of other species including garter snake and four rattlesnake vertebrae were recovered at one Oneota site. Excavations at regional rockshelters have produced bones of a variety of snakes, including rattlesnakes—again, apparently as remains from natural deaths at the site or brought in by raptors or scavengers.

Native Americans of the Midwest and beyond from precontact times have apparently regarded snakes, including rattlesnakes, as having special (spiritual/ritual) implications. A few Woodland period human burials in Illinois and Kentucky were accompanied by skeletons of large snakes. Some of this reverence might have been linked to Mesoamerican beliefs regarding horned or plumed serpents such as “Quetzalcoatl.”  A serpent effigy cut from mica, found at the Hopewell culture Turner Works site in southwestern Ohio, might represent a horned or plumed rattlesnake. During later Mississippian times in the southeastern U.S., marine shell and stone disks from ritual contexts have been found with a variety of striking rattlesnake representations (see: Hero, Hawk and Open Hand 2004). Rattlesnakes were recorded on the walls of the La Moille Cave in Winona County, Minnesota (Winchell 1911).

Finally, one remarkable snake representation is “The Great Serpent [Mound] in Adams County Ohio.” Squier and Davis recorded and surveyed the mound in detail in 1846 and described this 1300-foot-long effigy (unrelated to the animal-shaped mounds of Wisconsin’s Effigy Mound culture) as “Probably the most extraordinary earthwork thus far discovered…” (1848:96) (see also Romain 2018).