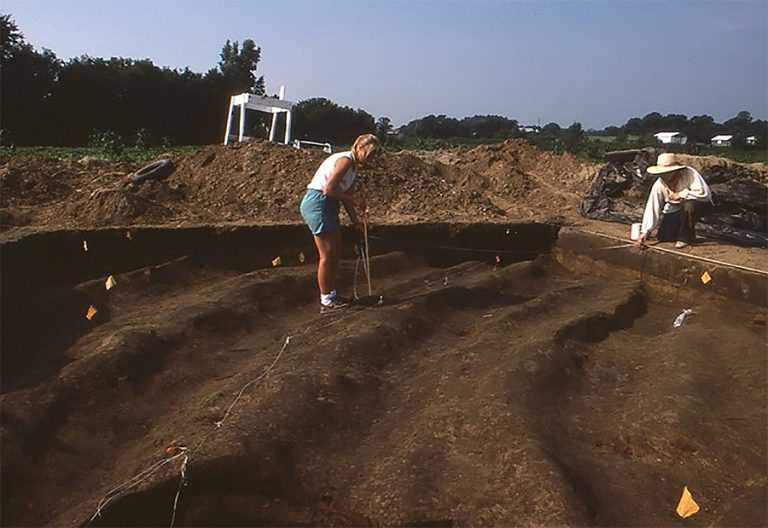 UWL archaeology students map some of the Sand Lake agricultural ridges in 1986.The Sand Lake agricultural ridged field complex, identified by MVAC archaeologists in 1982, was a spectacular Oneota site in La Crosse County with many acres of buried, preserved Oneota ridged fields (Boszhardt et al. 1985; Gallagher et al. 1985). The fields were constructed in an interesting “trapped wetland” that lay sandwiched between the bluffs and the sandy La Crosse terraces. This wetland was created at the end of the Ice Age, when sediments washing down the Mississippi River valley blocked the outlet of a small, tributary stream. Historic photos show an actual pond (Sand Lake) in this location. Building the agricultural ridges would have helped corn and other plants grow in this fertile, organically rich wetland soil without their roots becoming too wet. Some ridges even had what appeared to be individual planting mounds, visible in the photo as small bumps. The fields were probably used most heavily in the AD 1400s, with some use continuing until about AD 1600. During that time, deforestation of the adjacent hillsides triggered slope wash that buried some of the ridges, and the Oneota farmers made many attempts to rebuild and elevate them. MVAC conducted large-scale excavations at the ridged fields in the early 1980s, and in the late 1980s, the fields were largely destroyed by construction of a golf course.