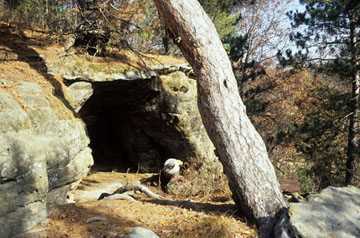 Rockshelters are shallow caves or shelters exposed in hillsides. Native peoples often used such places for winter camping because they provided shelter and protection from the wind and cold. Sites such as Raddatz Rockshelter and Preston Rockshelter in southwestern Wisconsin were popular places to spend the winter. Within the rockshelter small groups of people built fires, cooked, slept, made tools, and probably prepared hides for clothing. Garbage from these activities was left behind. Over the years, sand or rocks from the bedrock above would fall to the ground and bury this garbage. Later inhabitants would live on the new surface and leave their own garbage, which would again be buried. This happened many times, creating a layered record of occupations. Archaeologists excavating these layers can learn about the people who camped there and how their lives changed through time. Tools such as projectile points and scrapers, and food remains such as deer bones and nutshell fragments, tell us a great deal about everyday life.