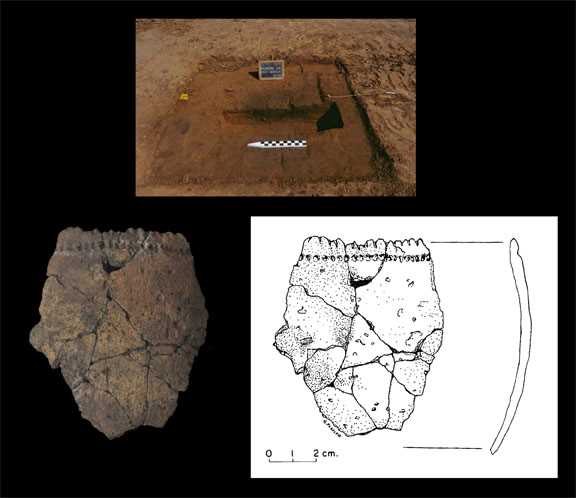 Woodland pottery This late Middle Woodland vessel was excavated from a pit feature at the Overhead site in 1983. The feature was a shallow, basin-shaped pit about 60 cm (2 feet) in diameter, with an ashy lens at its base. The top half of the feature had been cut off by plowing and bulldozing, leaving only about 15 cm (6 inches) of the base. A test trench placed through the west half produced grit-tempered Woodland pottery, charcoal, a few pieces of debitage, and burned rock. The ceramics have a sandy paste, possibly tempered with (leached) limestone and grit, and represent a single vessel. Decoration consists of tool stamping below the lip, with an exaggerated form of linear notching on the lip itself.  The Overhead site is south of La Crosse, Wisconsin.