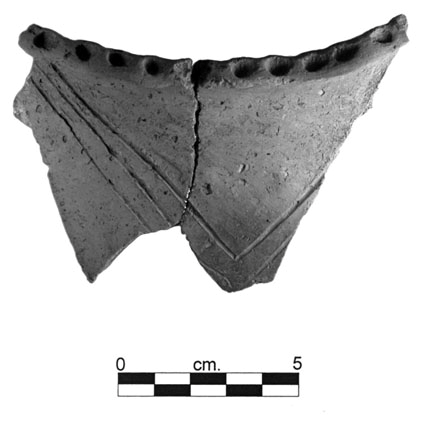 Pot sherd This vessel was recovered in the early 2000s at the Sanford Archaeological District in La Crosse, Wisconsin. This smaller, thin-walled vessel has a paste that contains very finely crushed shell. It also has a short rim (21 mm) that is flattened on the top and slightly folded to the exterior, in some areas having a wavy appearance. The lip is decorated on the top with round tool impressions that could be described as punctatelike. It has three deeply incised, well-made chevrons or zig-zags that start at the top of the shoulder and point down. Both the temper and the basic form of the vessel are different from the other globular vessels recovered at the site. This vessel is likely an imported piece.