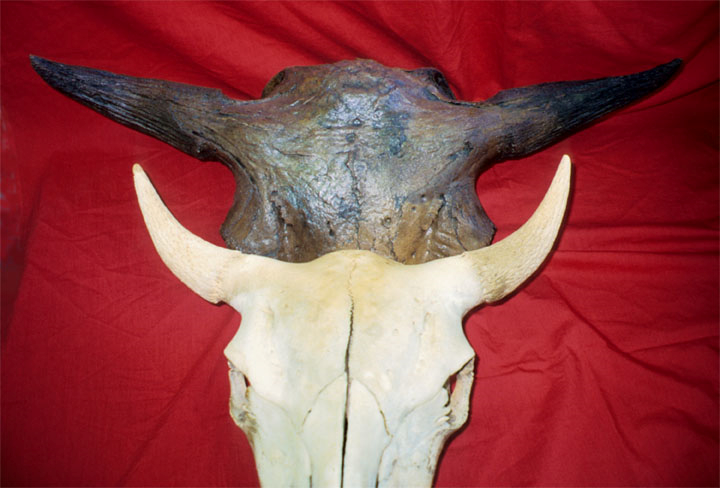 Rud bison cranium (top) compared to a modern bison (bottom) Extinct forms of bison once roamed this region. The first mention of the Rud bison came in a 1939 letter to Charles E Brown, Director of the State Historical Museum, telling of a large bison skull and another partial skull exposed by erosion in a stream in Buffalo County, Wisconsin. They came from a distinctive blue-grey clay below a peat deposit. A follow-up visit in 1992 by Jim Theler and Ernie Boszhardt of MVAC found nearly 100 additional well-preserved bison remains in the stream bed. These included a cranium that spanned 29 inches from tip to tip of the horn cores (top). The remains are identified as Bison bison occidentalis and may represent at least 4 individuals, including a subadult. No excavations have taken place at the site, and no artifacts have yet been found associated with these remains. Pictured is the Rud bison cranium (top) compared to a modern bison (bottom). Note the much larger size of the Rud bison, and the different shape of the horn core.