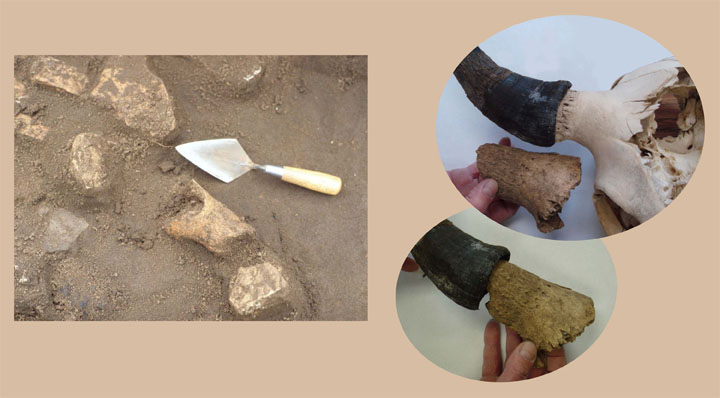 Bison Horn Core The photo on the left shows a partial horn core of a bison just below the trowel in a refuse pit at Pammel Creek, an Oneota  site in La Crosse County. Bison bones, other than shoulder blades (scapulae) made into hoes, are very rare at La Crosse Oneota sites. They include a few foot bones and at least two horn cores. The horns of bison might have been brought to the La Crosse area, probably from hunts to the west or through trading, along with the ever present bison scapulae. Native peoples of the historic era to the west of Wisconsin were adept at removing the outer horn from the horn core. The outer horn is made of a fibrous protein called keratin. The photo on the right shows the Pammel Creek horn core compared to a modern bison skull with the keratin sheath. Animals such as bison, cattle, and rhinoceros have horns supported by a horn core that are not shed during life. Early travelers in the west, such as the German Prince Maximilian, who spent time with the Mandan and Hidatsa on the upper Missouri River in the 1830s, made repeated reference to spoons made of bison horn. Modern bison horn spoons can be found with an internet search.

It should be pointed out that antlers are very different from “horns.” Antlers are found on male members of the deer family, such as deer, elk, and moose. They are shed annually, and are not “horns.” Thus, the reference to “elk horn” or “deer horn” is technically a misnomer.