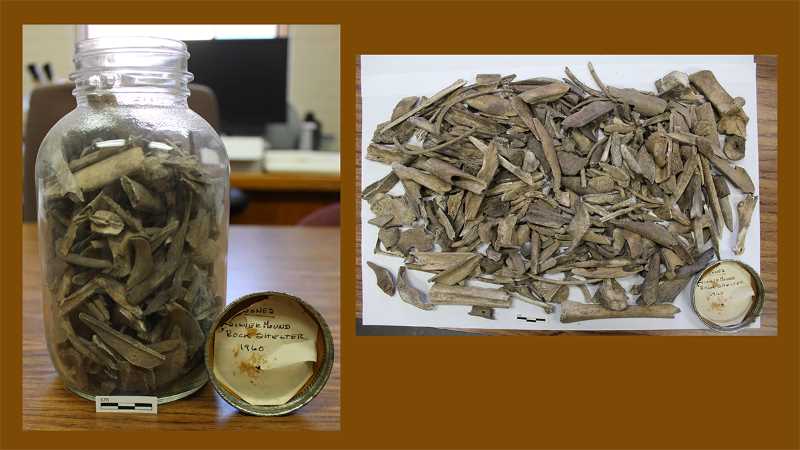 Jar of bones What’s In This Jar??

About 10 years before Jim Theler (now Professor Emeritus) retired from UW-La Crosse, an unlabeled glass jar full of fragmented animal bone appeared at the MVAC faunal lab. Since it had no provenience, Jim put it on top of a cabinet, where it sat for many years. One day a student asked what “green bone fracturing” looked like, and Jim grabbed the jar and poured out these examples, setting the lid upside down. To his surprise, he saw a label pressed up inside the lid that said “BONES / SILVER MOUND/ ROCK SHELTER / 1960”— over 20 years before MVAC was founded.

Silver Mound, the premier source of Hixton silicified sandstone, is now a National Historic Landmark owned in part by The Archaeological Conservancy. The only rockshelter recorded there did have some excavations done in 1964 and the 1970s, but we still don’t know who collected the bones in the jar. Jim identified a painted(?) turtle shell fragment and a possible wood duck bone as well as a raccoon bone, 13 beaver bones or fragments, and 25 deer fragments. There were over 300 unidentified mammal bones, most of them deer sized. Since Silver Mound is so important, Jim is writing a short report on these fractured bones for The Wisconsin Archeologist.

The moral of the story? Always check under the lid.