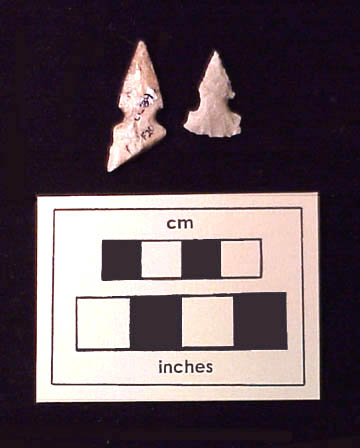 Description: This type has been segregated into four subclasses: Cahokia double-notched, triple-notched, multiple-notched, and serrated. The points are small to medium arrow tips. They are thin and generally well-made with either straight or triangular converging sides. This family exhibits multiple notching patterns, but characteristically they have a pair of relatively deep side notches. Cahokia double-notched are the most common Cahokia type found in the Upper Mississippi Valley. Triple-notched points are rare in the Upper Mississippi Valley. One point, found at the Energy Park site, an Early Oneota village near Red Wing, has five notches: two on each side and one in the center of the base. At the blended Late Woodland–Middle Mississippian Fred Edwards site in Grant County, Wisconsin, side-notched triangular points were distinguished from Grant Side-Notched on the basis of the angle of the base. Grant Side-Notched points have a square base with a 90 degree angle. Other side notched triangular points have basal angles less than 90 degrees. Both Grant points and side notched triangular points were recovered in number at the Fred Edwards site, which is well-dated between A.D. 1050 and 1150. Finney and Stoltman also isolate the Prairie du Sac Side-Notched variety as having a base that is narrower than the shoulder. This subtype may be related to Honey Creek Corner-Notched points; however, only one was found at the Fred Edwards site.

Material: Cahokia points are nearly always made of local cherts. Only a few examples of silicified sandstone Cahokia points are known for the Upper Mississippi Valley (e.g., the Emergent Oneota, Diamond Bluff/Mero site), including the northern portion, where numerous sources of this material exist. Heat-treatment may occur.