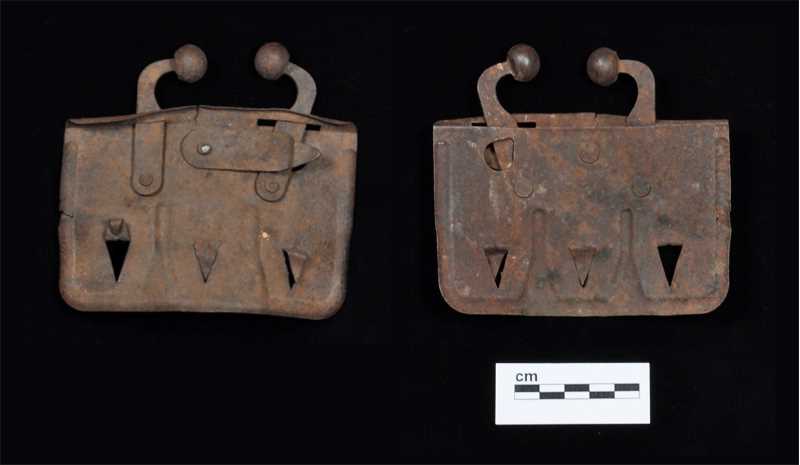 Calf Weaner Several years ago, while walking across our formerly pastured hillside in rural Vernon County, I found this unusual metal object.  It’s rusted and rectangular, measuring 3 by 4.5 inches, and appears to be made of sheet steel. It has two bulbous protrusions on extended “arms” on one longer side, one of which seems intended to move and lock in place. Below these are three isosceles triangles cut through on their long sides. Examining the object for some time, I thought it might be something off an old-fashioned lantern, stove, or piece of early farm equipment.

Suffering some frustration, I turned to my neighbor, Loren Cade, who grew up on that hillside property, which his father once owned. With a smile he told me it was a device to help wean calves. The bulbous ends of the arms went in the calf’s nose and locked into place. The points of the triangular cuts were bent out, when the calf attempted to nurse, they would irritate the mother’s udder, and weaning was in progress. The calf could still forage or drink water unimpaired. Similar devices used today are typically made of plastic.

Searching online, I found a very similar “calf weaner” shown on the “Nebraska History Blog: What is it Wednesday” for May 11, 2019, from the Nebraska State Historical Society. Their “calf weaner” with four triangular cuts was made by Kee Manufacturing of Beatrice, Nebraska. The bulbous protrusions and locking device for the Vernon Co. weaner seem nearly identical to the Kee Manufacturing specimen, and it seems likely that it was made by that company.