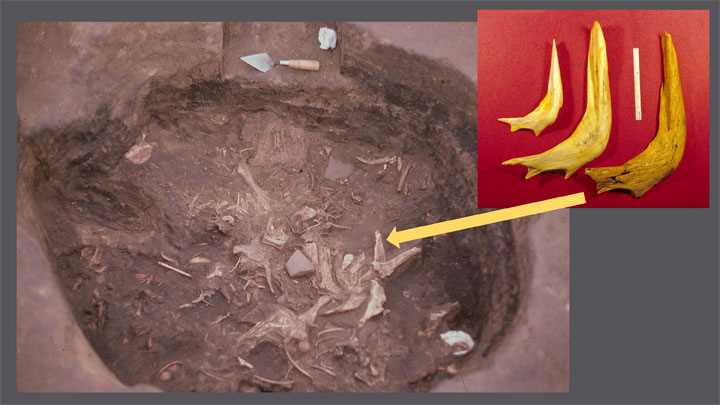 Catfish bones The largest species of catfish in the Upper Mississippi River is commonly called the mudcat or flathead catfish (scientific name, Pylodictis olivaris), which can weigh more than 100 pounds. Bones from large mudcats have been found in excavations at many La Crosse area Oneota sites. The photo shows a layer of discarded animal bone in Feature 87, a refuse pit excavated at the Sand Lake site near Onalaska in 1985. This bone refuse included partially disarticulated head bones from a mudcat that weighed about 50 pounds when alive. Large catfish were likely taken at nesting sites by hand in the early summer, or speared at night when they came in to shallow water. Live weights for archaeological specimens can be estimated by comparing them to modern bones from individuals of known weights. In the inset photo, the bones at the left and center are modern cleithrums (a paired bone at the back of the head) from mudcats weighing 10 and 50 pounds. On the right is the cleithrum from Feature 87. Cut marks on the bone indicate that the head was removed, and no post-cranial vertebrae from the mudcat were found in that feature. A mudcat’s head is about 20 percent of its total weight, so when fresh, the head from Feature 87 would have weighed about 10 pounds, with several pounds of tasty meat. The head might have been baked or boiled separately from the body, and pulled apart to remove the edible meat, with the bones then tossed into the pit.