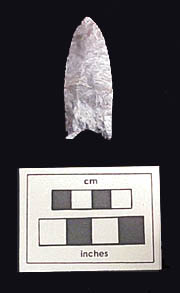 Clovis This is the oldest known point type found in North America. This spear point is named after Clovis, New Mexico, where it was found with extinct mammoth bones at Locality 1 of the Blackwater Draw site. Clovis points have also been found in association with mammoths at several sites on the Plains, providing the basis for characterizing Paleo-Indians as big fame hunters.

Other Possible Names or Related Points: Fluted point, Folsomoid. Goshen points may represent unfluted Clovis points on the basis of having been found beneath Folsom points at the Hell Gap site in Wyoming.

Distribution: Clovis points are reported from nearly every state south of Canada, suggesting rapid colonization of North America. This type has been found with extinct mammoths and mastodons at several locations in the western and midwestern United States, including the Kimmswick site in Missouri and perhaps the Boaz Mastodon site in Richland County, Wisconsin. A set, or cache, of twenty Clovis-like points was excavated at the Rummells-Maske site in east-central Iowa. Clovis or related fluted points have been found in northern Minnesota and northern Wisconsin, but not above Lake Superior. Those reported from the Upper Mississippi Valley are primarily surface finds from agricultural fields. Goshen points are reported from the northern Plains.

Material: In the Upper Mississippi Valley, these points were often made of high-grade and colorful materials such as fine quality Hixton silicified sandstone or glossy Cochrane chert. Some were made of Moline chert (originating from the lower Rock River in Illinois), jasper taconite (from the Thunder Bay area of western Lake Superior), and local Galena and Prairie du Chien cherts. Some Prairie du Chien chert fluted points appear to have been heat-treated.