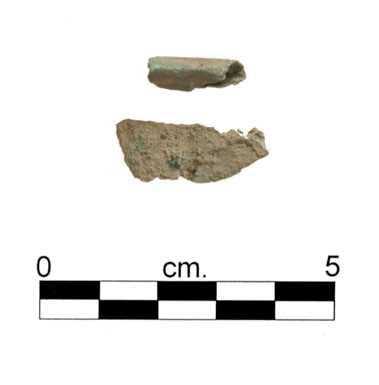 Copper sheet and bead Copper is a minor but persistent material in La Crosse Oneota assemblages. The copper at Midwestern Oneota sites is probably derived from drift copper or was traded from sources in the Lake Superior basin rather than the other source for native copper, the southeastern United States. In the late nineteenth century, there was still evidence of extensive prehistoric mining on Isle Royale in the Lake Superior basin.

Oneota copper artifacts are typically thin sheets that were cold hammered and annealed. In the La Crosse Locality, copper was used almost exclusively for ornamental pieces and only rarely for utilitarian items. Most copper pieces were probably finished on site rather than brought in as finished items, since the sites often contain small scraps of sheet copper or, more rarely, chunks of unworked copper.

Pictured: a copper bead and a sheet copper fragment recovered during excavations in the early 2000s at the Sanford Archaeological District in La Crosse, Wisconsin.