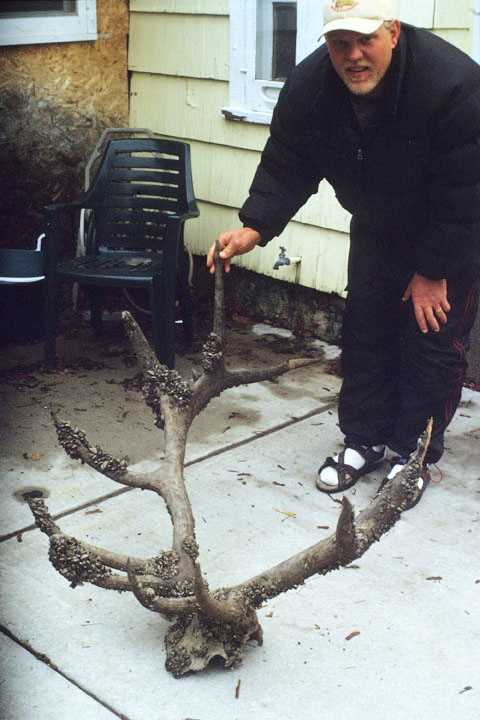 In the spring of 2001, Rick Nasack was fishing on the Mississippi River near Winona, Minnesota. When he pulled up his anchor, he thought it had caught on some tree roots, but looking more closely, he saw a set of elk antlers still attached to the top of the skull. The antlers were covered with invasive zebra mussels. The age of the antlers is unknown, but they are almost certainly those of the now extinct eastern elk subspecies, last recorded living in the Wisconsin-Minnesota region about 1870. Antler finds and early historic sightings indicate that elk or “wapiti” were once widespread in Wisconsin (Jackson 1961:410, Map 75). Fragments of elk bones and antlers are found at many Native American archaeological sites in western Wisconsin, but there is no reason to think that these particular antlers are associated with human activity, either ancient or historic. Elk, deer, and bison commonly “went through the ice” and drowned while trying to cross rivers in the winter, and that might be how these antlers ended up in the Mississippi. Presumably they became buried in river sediment and emerged during an erosion episode. The eastern elk subspecies differs from the western Rocky Mountain elk (Thomas and Toweill 1982) that has now been introduced into portions of Wisconsin. Thanks to Rick Nasack’s recognition of their importance, the antlers were saved for others to appreciate. Cleaned of zebra mussels, they are now housed at the Mississippi Valley Archeology Center (MVAC) on the UW-La Crosse campus. They have been displayed yearly at the MVAC annual Artifact Show held in March at the Valley View Mall in La Crosse.