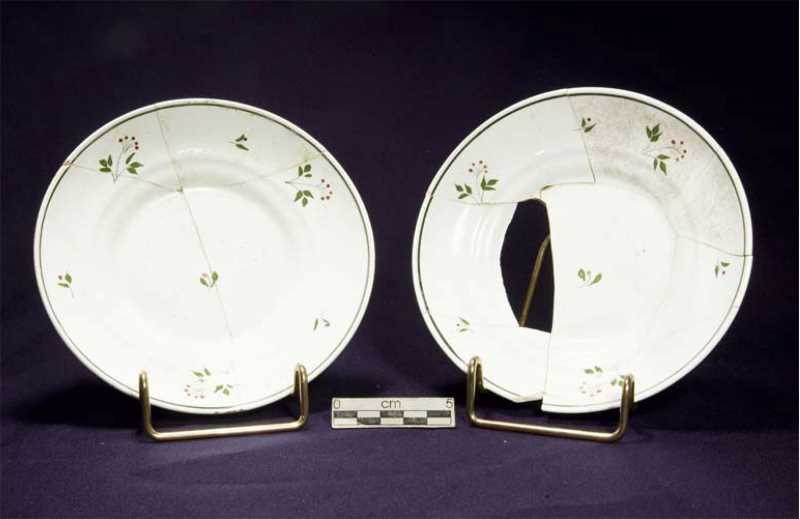 Saucers These two hand-painted whiteware saucers have a dark green/black band on the interior just under the rim, and small sprig designs of red berries with green petals placed randomly around the insides of the saucers. They also have the letter “W” stamped on the bottom. Numerous nineteenth-century English potters used a “W” stamp to identify their designs, including the Walley company (circa 1845–1858), the Warburton company (circa 1802–1823), the Wolfe company (circa 1781–1810), and the (Enoch) Wood company (circa 1818–1845) (Kowalsky and Kowalsky 1999:359-387). These pieces likely date between 1840 and 1860 (Majewski and O’Brien 1984:41) and probably date to around the early 1840s. The saucers are about 6 inches in diameter at the rim and 3¾ inches at the base. Recovered during the 2006 excavations of an early 1830s-1840s privy in Prairie du Chien, Wisconsin.

Majewski, Teresita, and Michael J. O’Brien
1984 An Analysis of Historical Ceramics From the Central Salt River Valley of Northeast Missouri. Publications in Archaeology Number 3. Department of Anthropology, University of Missouri–Columbia.