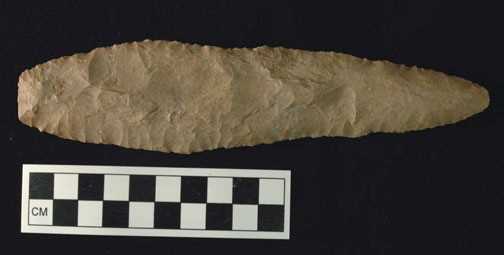 Lanceolate blade This large, thin lanceolate blade was found during excavations in the early 2000s at the Sanford Archaeological District (SAD) in La Crosse, Wisconsin. When found, the blade was vertical, tip down, as if it had been holding something in place. The blade was 18 cm (7 inches) long and 4.15 cm (1 ½ inches) at the widest point. The raw material could not be identified with confidence, but it might be a variety of gray and tan Burlington chert.

The blade is much more finely made than typical Oneota lithic tools. On much of the blade edge, flakes have been driven off toward the midline. These flake scars do not go all the way to the midline but are approximately 7mm long. The base is not ground and, like the blade portion, has fresh flake scars indicating that the piece was not used. There is little if any beveling, indicating that it was not resharpened. Based on the other knives found within the SAD, this lanceolate blade is probably not of Oneota manufacture. The shape is reminiscent of an Early Archaic Agate Basin point.