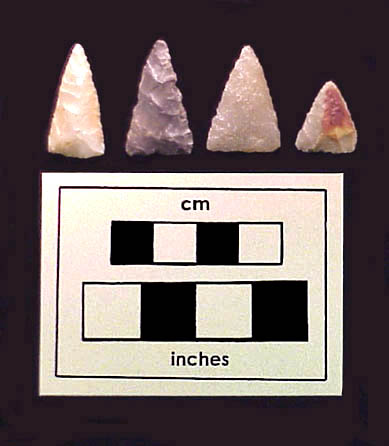 Madison Triangular This point type was first named in an unpublished guide to central Mississippi Valley projectile point types based on examples found at the Cahokia site and in St. Clair and Madison counties, Illinois.

Age: 1,100 to 300 B.P. These points are associated with Late Woodland cultures and the Mississippian/Oneota Traditions.

Distribution: Madison points are common throughout the Midwest, concentrated along the Mississippi River basin and Oneota settlement localities.

Description: These are small unnotched triangular points. The blade edges tend to be straight but may be slightly concave or convex. Bases may also vary from straight to concave or convex. Madison points tend to be half as wide as they are long (isosceles triangle), but some are as wide as they are long (equilateral triangle). Although one of many commonly called bird points, these are true arrowheads that were used to hunt game like deer, elk, and buffalo. These points are made of whatever local lithic materials were available including Prairie du Chien chert and silicified sandstones from the Upper Mississippi Valley. The majority of the Madison points at the Late Woodland/Middle Mississippian village of Aztalan in southeastern Wisconsin, however, are made of silicified sandstone from west-central Wisconsin. A few quartz Madison points have also been found in the Upper Mississippi Valley, having originated in glaciated northern regions. Variations range from nicely made triangles to simple retouched flakes barely recognizable as points. In central Wisconsin, Late Woodland Madison points tend to be serrated and made of silicified sandstone. At Late Woodland (Eastman phase) sites near Prairie du Chien, only a few points are serrated and most are made of local chert. At La Crosse Oneota sites, these points are never serrated and from A.D. 1300 to 1400 were made predominately of silicified sandstone but thereafter were made from chert. It appears that late Oneota points are slightly larger.

Experimental replication of arrows such as those found in the Upper Mississippi Valley indicates that shaft production is a long and laborious task. In contrast, manufacture of unnotched triangular points is relatively simple. The absence of notching suggests that these expedient points were hafted in a fashion that allowed the point to be detached, staying in the wound, while the shaft may have been retrieved and retipped. This would have been an effective weapon, where extraction of the tip may not have been possible by pulling out the shaft.

Material: These points are made from a variety of local and nonlocal materials. In the Upper Mississippi Valley, Madison points are made of Prairie du Chien chert, Galena chert, Hixton and related silicified sandstones, and quartz.