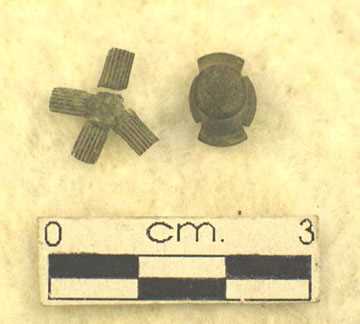 The first type , found in the Enlisted Men’s Quarters, is a cap with ribbed or corrugated sides known as a “common cap” (left), sometimes called “pistol cap” due to its smaller size and lighter ignition charge which was more suitable for pistol or small rifle operation (Gooding 1975). The common cap recovered at the fort has extreme firing distortion.

The second type of percussion cap recovered is a “Top Hat”, also called the “military” or “musket” cap (right). This type of cap was developed to be easily handled by soldiers wearing gloves, however, these were not exclusively military issue (Gooding 1966). The “Top Hat” cap recovered at the fort was found in the Officers’ Quarters and exhibits slight splitting of the sides from firing.