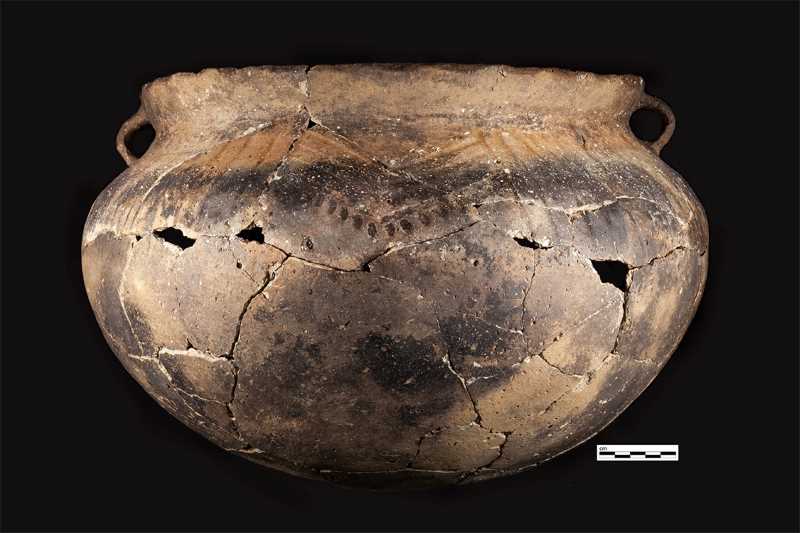 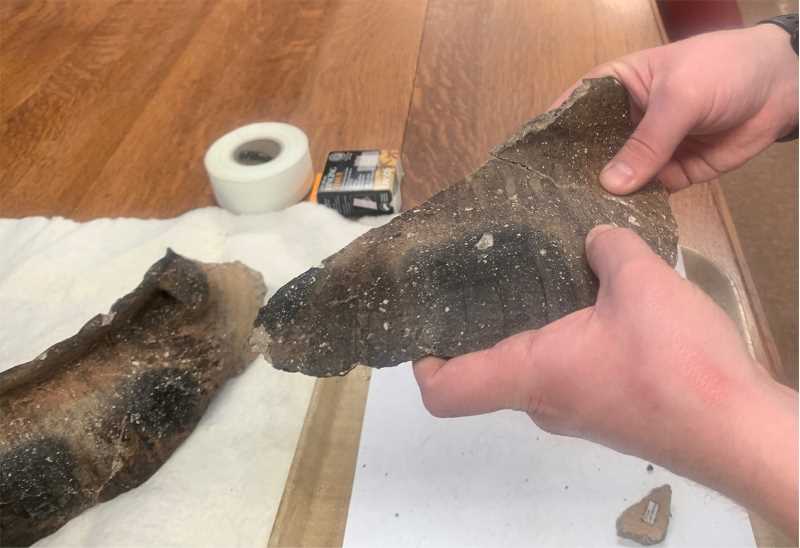 In 2012 MVAC excavated about 500 Oneota features exposed during the reconstruction of STH 35/2nd Avenue in downtown Onalaska. One unusual discovery was a nearly complete vessel found crushed in place at the base of a feature. Vessel 45, as it was later numbered, was represented by well over a hundred fragments of varying sizes.

Reconstructing a vessel is much like putting together a three-dimensional jigsaw puzzle, with quite a few pieces missing. You typically begin with the edges, which in the case of pottery, means the rim. Rim fragments from Vessel 45 were reassembled, and decorated body pieces were glued together and attached to the rim. Then came the slow process of figuring out where the undecorated pieces went. Some parts of the vessel were easier to figure out. Sherds from the base were thicker and in some cases larger, making it easier to fit them into place.

After most of the pieces were glued into larger sections, it was time to glue those sections together to form the whole vessel. This task was complicated by three things. First, some small joining fragments were missing. Second, errors in forming a vessel’s curved shape tend to creep in during the gluing and drying. Right after gluing, refitted pieces are usually placed in a sandbox to dry, and any shift can alter the curvature, making subsequent joins difficult. Third, the exterior had scorch marks or firing smudges that made its color quite variable—sometimes even adjacent sherds were completely different colors. In the end the vessel was fully reconstructed (albeit precariously), but it was left in a few very large segments because of those subtle errors from gluing.

The reconstructed vessel is very large and slightly oblong. It has a moderately high, slightly everted (outward-flaring) rim with bold finger impressions on the lip top to exterior lip. There are two handles on opposite sides of the vessel. The shoulder decoration consists of alternating panels of 12 or 13 vertical trails made with either a finger or a broad tool, and four nested chevrons with rectangular punctations below. There are four panels of nested chevrons, one under each handle and the others midway between them. The oblong rim has a diameter of 36.5 cm (14.4 inches) at the handles and ~34 cm (13.4 inches) midway between the handles. The motif is typical of the type Perrot Punctate, with very bold lip-top impressions typical of the Pammel Creek phase, A.D. 1400–1500.