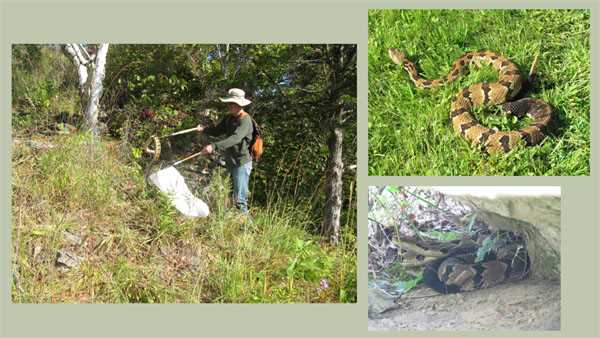 Rattlesnake Many archaeologists who have worked among the rocky bluffs of western Wisconsin’s Driftless Area have encountered timber rattlesnakes. These snakes were once common and widespread in the region, but due to fear of this venomous reptile they were hunted for a cash bounty until 1967, and they are now relatively rare and confined to a few locations. Jim Theler and Suzanne Harris were showing visitors a rockshelter in Vernon County this past August when one of the visitors had an encounter of the very close kind, nearly stepping on a 50-inch timber rattlesnake at the shelter entrance. This beautiful animal was not aggressive and just gave its warning buzz-like rattle– “Keep Away, Don’t Step on Me.” On average there is one rattlesnake bite every four years in Wisconsin, with only two deaths reported since 1900. Most bites occur when rattlesnakes are harassed or mishandled.  Luckily, no one (snake or human) was injured in this close encounter.

This particular rockshelter had been visited many times in past decades, and no rattlesnakes were ever observed.  In fact, it’s thought that a rattlesnake hasn’t been seen since on this property since the 1950s.  Theler and neighbor Loren Cade saw the snake again at the same location two days after the first encounter. Timber rattlesnakes are a Protected Wild Animal in Wisconsin, so Theler placed a call, and a DNR ecologist arrived a few days later to move the snake to a more remote location.

The DNR ecologist suggested that this 50-inch timber rattlesnake was probably a male and may have come from a den that was overgrown and no longer satisfactory for the snake’s life cycle. Moreover, late August is breeding season for timber rattlesnakes, so this one may have been searching for a mate.

One other species of rattlesnake, the eastern massasauga, was once common in the Driftless Area. This species is smaller than the timber rattler and is associated with moist lowlands. Today the massasuga exists in just a few locations and is Wisconsin’s most Endangered reptile.