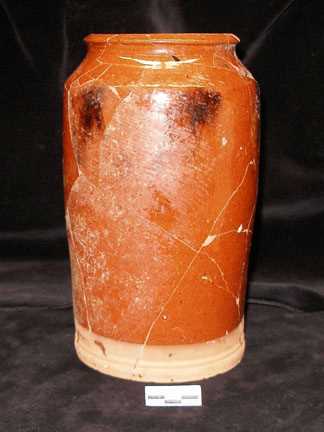 Redware Preserve Jar One almost complete redware preserve jar was recovered during the 2006 excavation of an early 1830s into the 1840s privy in Prairie du Chien, Wisconsin. It was found in several pieces but was reconstructed to form a vessel about 8½ inches tall, with a rolled lip. The vessel tapers in near the rim and is 3 ¼ inches in diameter at the rim and 4½ inches at the base. It has a dark, rust-colored glaze with some burn marks on the side. The vessel is unusual in that the bottom of the exterior does not have glazing on it, but the interior does.