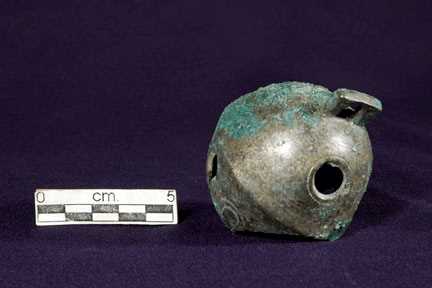 Sleigh Bell This brass sleigh bell, or rumbler bell as they are sometimes called, was excavated in 2006 from an early 1830s to 1840s privy in Prairie du Chien, Wisconsin. The bell is missing a portion of one side as well as the loose iron ball from the inside. Bells were one of the most common sights and sounds in colonial and nineteenth-century America and were used for various purposes (Noel Hume 1970:59).