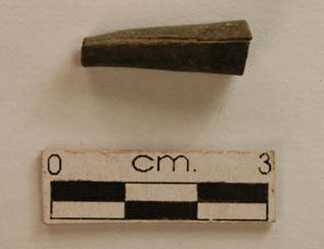 Tinkling Cone Few Native American trade items were recovered during the 1999 excavations at Second Fort Crawford in Prairie du Chien, Wisconsin. Native Americans received their annual annuities at the fort and probably would have gotten some supplies at the sutler’s store. The only items found that were clearly trade or Native American associated were a trade earring, some of the beads, vermillion (red pigment), and this tinkling cone, which was found in the Officers’ Quarters. It is tapered at one end and made of brass.