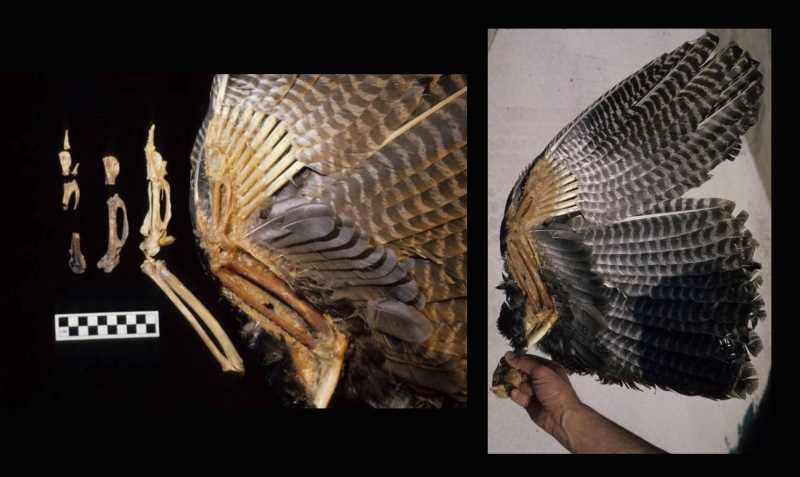 Turkey wing When Europeans first settled in Wisconsin, wild turkeys were found south of a line running from Prairie du Chein to Green Bay (Schorger 1942:175-178, Fig. 1). This historic distribution matches archaeological records of bird bones from Wisconsin sites. In the La Crosse area, turkey bones have only been found at ten Oneota sites, and all but one are bones from the wingtips (Theler 2000:129-130). The photo on the right show the underside (ventral view) of a wild turkey wing with feathers removed to expose the underlying bones, with the large primary and secondary feathers on the posterior portion in place. The photo on the left shows the modern, partially cleaned turkey wing; to its left is a modern set of wingtip (distal) bones. These include the safety pin shaped carpometacarpus, with the associated digits and phalanx bones. These bones support the ten primary feathers on each wing. Historic accounts of Native Americans’ usage (Schorger 1966:361-62) and information from modern primitive archery enthusiasts indicate that the stiff primaries are among the best bird feathers for fletching arrows. The secondaries are softer and do not work as well. The two sets of bones to the left of the modern bones are wingtip bones, found at Oneota sites, that would have supported the primary feathers. The La Crosse Oneota people were archers who used lightweight arrow points and lived north of the pre-modern range of wild turkeys, so it seems likely that wingtips were brought into the area from the south.

Schorger, A. W.
1942 The Wild Turkey in Early Wisconsin. Wilson Bulletin 54:173-182.
1966 The Wild Turkey: Its History and Domestication. University of Oklahoma Press. Norman.