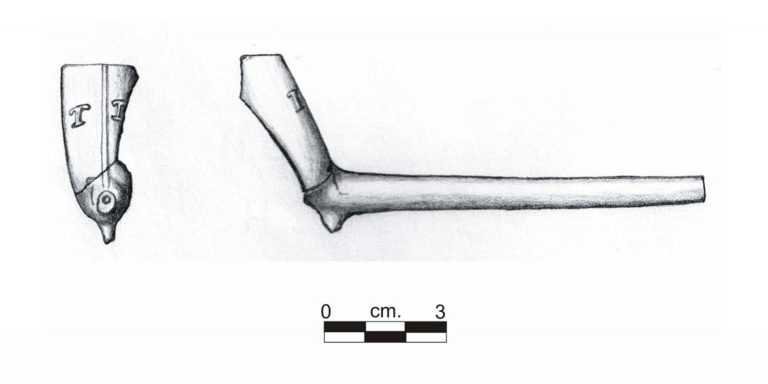 TD Pipe This pipe was recovered during the 2006 excavation of an early 1840s-1860s privy at the Lessard site in Prairie du Chien, Wisconsin. The pipe is marked with a “TD,” with the T and D spaced rather far apart. TD-marked pipes are often found on historic sites in a variety of sizes, shapes, colors, and styles of marking. The original maker of TD-marked pipes is not certain. The pipes are believed to have originated at the time of the Revolutionary War. Most clay pipe authorities believe that the first TD-marked pipe was made by Thomas Dormer, a well-to-do London merchant, and the only pipemaker in London with these initials recorded as an exporter (Alexander 1978:3). Others have speculated that Thomas Dennis of Bristol made the first TD pipes (Walker 1966:96). TD-marked pipes were produced in England, Ireland, Scotland, France, Holland, Germany, Japan, and the United States for over 200 years (Alexander 1978:3).