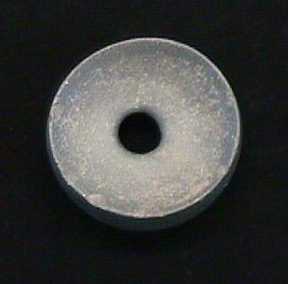 Games have been a part of people’s lives throughout history. Today in Wisconsin, when people think of Native American games they quite often think of gambling and casinos. The Native American tradition of gaming, however, has a long history and is much broader than just casino gambling. In the La Crosse area, a game piece called a chunkey stone has been recovered from archaeological site that dates back to between AD 1300-1600. This is the only artifact recovered from archaeological sites in this area that can be specifically identified as a game piece, although there must have been others that archaeologists do not recognize.

Ethnographic accounts of early European contact with Native Americans indicate that a variety of games were played across the United States. There are similarities between many of the games played in different regions. Game rules changed from tribe to tribe and the materials that the games were made of varied from region to region, reflecting the differences in available resources. The purpose of the games also changed depending on the tribe and the region. Some games were played by specific people (men or women only), or were played at specific times of the year, while some were related to religious activities, ceremonies, or festivals.

Games served a variety of purposes from religious to amusement. Games sometimes were a means for children to learn important skills. Games encouraged social interaction within the tribe and with other tribes. Gambling on games provided the opportunity for the redistribution of wealth, both within and outside the tribe.

Dorothy Decorah talks about her Childhood Memories of Games (transcripts)

Thousands of games were played by Native Americans across the United States and some continue to be played today Most games can be divided into two categories: 1) games of dexterity, and 2) games of chance.

Games of dexterity usually involved some type of physical skill while games of chance sometimes included “dice-like” objects or are games with a component centered around guessing. The games highlighted in this section of the web site were played by Native Americans in this region and also by tribes from the plains.

Games in this category involve the physical skill of the player(s). Skilled hand-eye coordination is reflected in games, such as archery, chunkey, and snow snake, which require shooting/throwing at a moving or stationary target. Good hand-eye coordination is also required for games such as ring and pin toss. Other games, such as the complicated ball games of lacrosse and double ball, require dexterity and stamina. 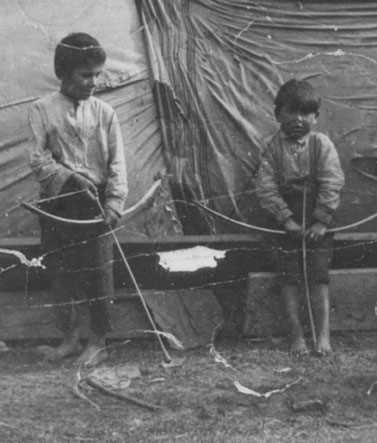 Archery involves shooting a target with a bow and arrow. As young boys played games with bows and arrows they developed technical skills that they would use as adult hunters.

In this game a chunkey stone was rolled over the ground or ice while several players threw spears in an attempt to indicate where the stone would stop rolling. The closest to the final location of the stone, without actually hitting the stone, was the winner. The chunkey stone is the only specifically recognized game piece that has been recovered from archaeological sites in the La Crosse area. 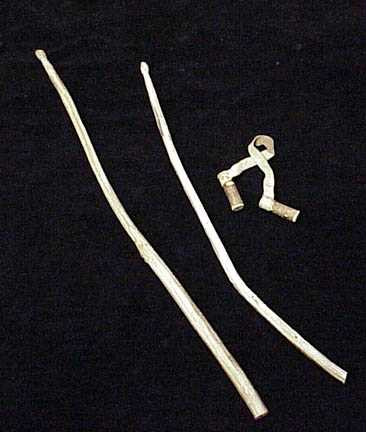 Double ball was a woman’s game resembling Lacrosse, that involved tossing, catching and swift running. The players used curved sticks and a double ball, which consisted of two small oblong deerskin bags joined together by a deerskin thong. The object of the game was to get the ball over the opponent’s goal. 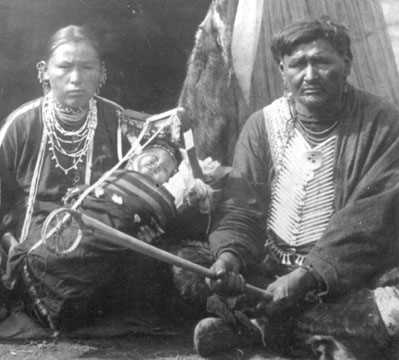 The stick and ball games of the woodland people known as Lacrosse is a very old game.  The ancient cities of Mesoamerica where already playing ball games symbolizing the movements of celestial bodies.  This  traditional sport moved north along trade routes, along with its religious philosophies of the universe and creation and were acculturalated into existing woodland culture.  The original unlimited number of players and lack of boundaries represented the infinite number of stars in the night sky.  The game of Lacrosse for Native woodland people is as ancient as creation itself.

Even today one can recognize the prehistoric religious symbolism of Lacrosse and its twin, the “little brother of war” (war club) at Wisconsin effigy mound sites.  The panther and linear mounds and their associated conical mound reflects this religious symbolism of events in the celestial sky above.  Thus Lacrosse is known by native people as the “game of creation”.

Lacrosse served woodland people both religiously and as a practical cultural teaching.  It trained men for war, provided a neutral field for cultural exchange and trade, created political alliances and settled disputes.    Lacrosse also helped to reinforce religious beliefs and tribal cohesion.  This native ball game was the cultural fabric that provided woodland people a stable society in which to live.

Today lacrosse is played locally, at colleges and internationally.  In today’s military, the U.S. special forces have found that Lacrosse players have the highest graduation success into this American elite warrior society.  Under the guidance of Oren Lyons of the Onondaga Nation, the Iroquois National Lacrosse team is the only Native American sports team that competes on the international level.

Replica of ring and pin

This game required good hand-eye coordination. A ring was attached to a thong or cord which was then attached to a pin. The ring was swung in the air with an attempt to catch it on the pin. Woman and girls typically played this game. A similar European game is the cup and ball toss. 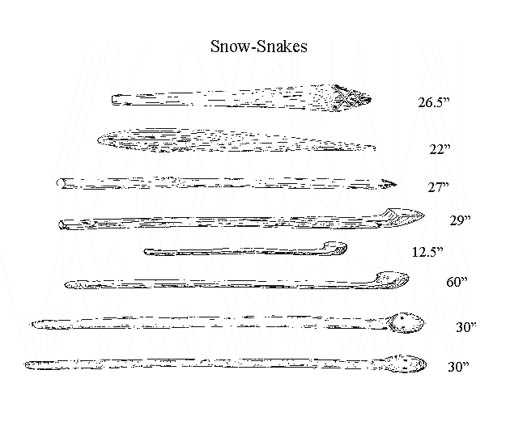 The Winter Game of Snow Snake

The “snow-snake” is a long slender, polished wooded stick that ranges from 3-9 feet in length.  It is an ancient game modified from the atlatl.  The head of the snow-snake is tipped with lead and shaped like a bird or snake head.  The goal is to out distance your competitors with your throw of the stick.  There is a notch at the tip which the forefinger is placed and the throw is made under-hand. Great pride is taken on using various and interesting wood making them individually unique.  The snow-snakes are religiously anointed and given names which are inscribed just below the head.  There are many secret ointments such as tallow, wax, oils and gums which help in adding distance in different snow conditions.  The track is laid out by dragging a log creating a small ditch over a quarter mile.  When the snow-snake is thrown and glides down the snow trough, it shimmies and gives the appearance of a snake movement.  There are several umpires that monitor the game.  The male players and spectators make wagers on the players and their snow-snake.  The national snow-snake competition is held every winter at Six Nations in Canada.

Games of chance can be divided into two types, those involving guessing and those using a type of dice that are thrown to obtain a random score. Guessing games consisted of either hiding an object or guessing numbers. Games of chance use dice displaying a variety of decorations and made from materials such as bone, walnut shells, peach and plum stones, grains of corn, shell, and pottery disks. Score was usually kept with sticks or twigs. Over 130 tribes were ethnographically recorded during the 1800’s as having played dice games. Both men and women participated in guessing games and games of chance, however not together. 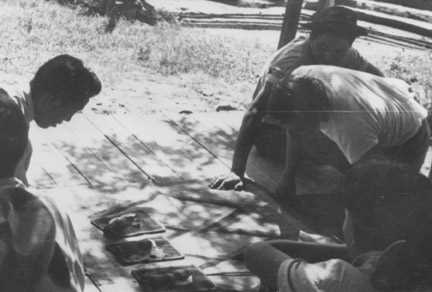 This game, sometimes called the hidden ball game, was played by two groups of men. The players sat opposite each other on a blanket. Four moccasins were placed in a row between the two groups. One of the groups watched as a token or ball was hidden under one of the moccasins by the other group. The players made pretenses of hiding and removing the token in an effort to make it more difficult to discover the actual location of the token. The group watching then guessed under which moccasin the token had been hidden. The Ojibwa, Ho-Chunk, and Menominee used a “striking stick” to turn over the moccasin where they thought the token was hidden. If the player guessed the correct shoe, four points were scored while four points were subtracted if the wrong shoe was picked. Sticks were used to keep track of the score.

(Omaha and the Hidatsa, BrulÁ, Santee, Oglala, Teton, Wahpeton, Sisseton, Yankton, and Mandan of the Dakotas)

This type of dice game was played by a variety of tribes. The game was usually played by women in pairs. The game materials consisted of five plum stones with markings to indicate point value, a bowl or basket and 100 sticks or twigs for counting. The object of the game was to win the most points out of the 100.

The game started when players lightly tossed the stones upward using the bowl. The toss was light enough to move all the stones but not violent enough to make them fall out of the bowl. Any stones that did fall outside the bowl did not count. The player continued to toss the stones until no points were earned, then the next person took her turn. 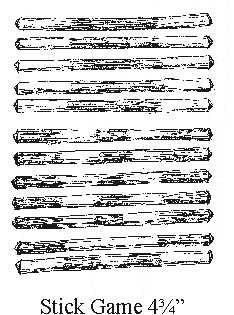 One type of guessing game used small wooden sticks that were carved or painted with bands of color. The number of sticks varied from ten to more than a hundred and were divided into two bundles. The object was to guess the location of an oddly carved or painted stick. Another version would have involved guessing which bundle of sticks had more than the other.