Thanks to a grant awarded by the Wisconsin Historical Society, the Mississippi Valley Archaeology Center developed an archaeological model of La Crosse County, predicting where unknown prehistoric sites may exist. This predictive model was created using a Geographic Information System (GIS) to view important environmental factors such as soil type, slope, distance to water and elevation throughout the county. Using known site locations and knowledge of the La Crosse area, a map of “archaeologically sensitive areas” was generated and made accessible to the La Crosse County Land Information and Zoning Department. The county can use this map for planning purposes, and MVAC will use it to choose areas to test in the future.

When the model was completed, MVAC staff took out school groups and public volunteers to survey several areas likely to have intact cultural remains. Artifacts were recovered from all nine of the locations surveyed and tested. 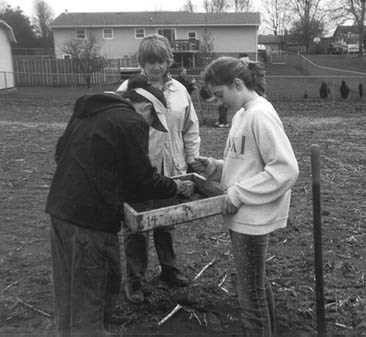 Checking for artifacts in the screen 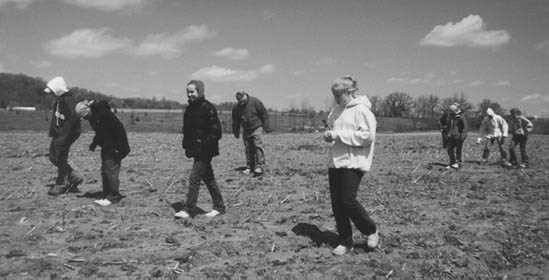 In the spring of 2002, MVAC was notified that a housing development was planned for approximately 30 acres of land within the Sand Lake Archaeological District near Onalaska. An archaeological site (New Road Site, Lc-432) had been reported by MVAC in 1989, located in the northeast corner of the acreage to be developed. The site consisted of lithic materials and Oneota ceramics recovered from the surface of dunes on either side of a road cut that had bisected the sand dune.

MVAC staff conducted several surveys of the area to determine the extent of the site. As part of this grant, MVAC’s Education Program was able to arrange for five school groups to survey the site in the spring of 2002. Students involved in the surveys were from the following schools: Emerson Elementary, Longfellow Middle, and Lincoln Middle, all of La Crosse; and Onalaska Middle School. Artifacts recovered from surface collection and shovel testing include three Madison triangular points, bifaces, scrapers, one drill, Oneota pottery, one piece of Catlinite, and hundreds of chert and orthoquartzite flakes.

The Archaeology Education Program worked with teacher Tim Sprain from Longfellow Middle School to include an archaeological survey in an Environmental Day planned for April 2002. Under the direction of MVAC staff, students participated in surface collection at the Van Wormer/Gilster site (47Lc-286) near the village of West Salem (Figure 7). The field had been fall plowed in 2001, and lightly disced in the spring of 2002. A concentration of artifacts was recovered from the edge of a high terrace overlooking Lake Neshonoc. This site was first reported to MVAC in 1986. The collector reported that he had recovered points, bifaces, and flakes from this site in the 1920s/1930s, but that the collection had been stolen. Other than a piece of Oneota pottery, no diagnostic artifacts were recovered by the students.

The Gilster 2 site lies east of the VanWormer/Gilster site, on a field which had recently been plowed by the landowner. Artifacts from this site were much less dense than those at the Van Wormer/Gilster site discussed above. This field is higher in elevation and further from the lake.

Volunteer Surveys With the Public 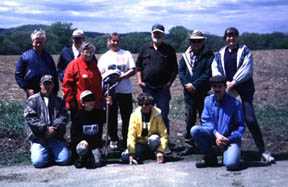 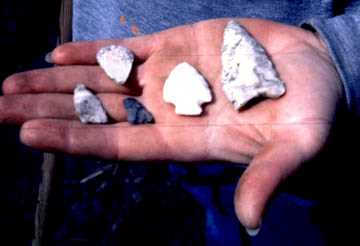 Each year MVAC staff conducted a Volunteer Field Survey during Wisconsin Archaeology Week, which is held in May of each year. The Long Coulee area has been a focal point for the field surveys due to its close proximity to the village of Holmen, which is experiencing urban growth. It is expected that much of the Long Coulee area will be developed in the next ten to fifteen years, and in fact several housing developments are already in place in the coulee. As part of the 2002 Wisconsin Archaeology Week event, MVAC staff and volunteers surveyed four known sites in Long Coulee and recorded another site from a Long Coulee resident.

The Lee site was first reported to MVAC in 1989 by an area collector. This site was again surveyed during the 2002 MVAC Volunteer Field Survey. Survey was completed of a plowed field. Artifacts were recovered from existing site boundaries, as well as further south in the field. An update expanding the site boundaries was sent to the Historic Preservation Office at the Wisconsin Historical Society. Artifacts recovered from the site consisted of a scattering of flakes.

This site was briefly checked by two volunteers from the 2002 field survey. Some flakes were recovered despite the fact that field conditions were not ideal. The field had been plowed the week prior to survey, but lack of rain had left the field pretty dusty.

This site lies nearest to Holmen of those tested, and is in fact adjacent to a fairly new housing addition within the village. Flakes were collected over the whole field, but artifacts were predominantly located along the ridge to the east and north of Halfway Creek. This site was reported this year as a result of the field survey.

Trocinski I is located north of Moe Coulee. The field was in small soybeans and dusty, but clean of vegetation. A scattering of flakes was recovered from the site, with a heavier concentration found east of the barn.

Troncinski III lies north of Moe Coulee Road. Survey was conducted in a corn field, with good visibility. Most of the material collected is concentrated on the top and margins of the ridge overlooking Halfway Creek, although a scattering of flakes was found throughout the field. A wide range of lithic raw materials were represented, including a flake of obsidian-opaque and cochrane chert (caramel and white/translucent), some of which is head-treated. Several triangular points and end scrapers were recovered, pointing to the Oneota culture. A possible Paleo component may exist at the site, based on the raw material type. 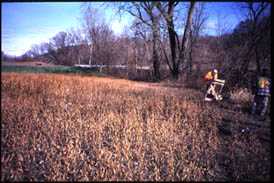 This site is located in a large flat field adjacent to a stream. Initial survey in 1998 documented the presence of large bifaces of orthoquartzite that suggested an early, possibly Paleoindian occupation. In addition, the presence of a deep organic zone over clay suggested that the soils might be late glacial or early post-glacial. Therefore, testing was conducted in 2001 to evaluate whether any portion of the site existed outside the plow zone.

An unsystematic surface collection of portions of the Stasiak II site was undertaken on October 27, 2001. Because the field was still in soybeans, there was limited visibility. Nevertheless, a number of large bifaces were found on the surface, concentrated (or perhaps most visible) near the creek. Notable are three biface fragments of large, thin, well-made orthoquartzite and an orthoquartzite chopper that were clustered in one area near the creek. The raw material is apparently local, as 1-2 foot long tablets were also found at the margin of the field, and smaller slabs were found in the field.

A 1×2 meter unit was excavated near the location of the bifaces. The plow zone was removed as one level, skim-shoveling and screening all soil through 1/4 inch mesh. A total of 16 flakes were found in the plow zone, all of the local orthoquartzite. The plow zone was approximately 16 cm deep, with well-defined plow scars at the base. The second level was a 10-cm level into the subsoil, and found only 3 tiny flakes that probably resulted from the extensive rodent runs in the subsoil. The subsoil had a high clay content, with extensive rodent disturbances. It appears that the plow zone has already incorporated the topsoil, B horizon, and some of the C horizon sediments, resulting in limited potential for intact deposits.

The bank of the creek was examined, but there were limited areas of exposure and no artifacts or features were visible. Additional shovel tests near the unit suggested that there may be variable depths to the clay, and possibly different deposits. Future work is suggested to attempt to map the deposits and evaluate whether buried intact deposits may exist elsewhere at the site. Otherwise, in the absence of intact deposits, the site does not appear eligible to the National Register.