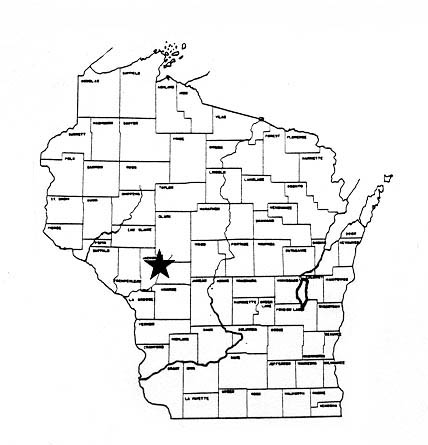 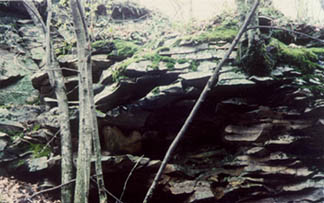 One of the most famous archaeological sites in the Midwest is the Silver Mound quarry/workshop complex in Jackson County, Wisconsin. Although its name implies that it is a burial mound which contains precious metal, Silver Mound is neither. The mound is actually a large sandstone hill that contains layers of cemented silica, forming very hard, brittle rock. This rock, called “Hixton Silicified Sandstone,” “Hixton Orthoquartzite,” or “Sugar Quartz” was a very unique material used by Native Americans to chip stone tools.

The layers of bonded silica which form Hixton Orthoquartzite distinguish this rock from other sandstone. This rare process of cementing created material harder than flint. This stronger material holds sharp edges longer when used as tools such as knives and hide scrapers, requiring less re-sharpening. Although several other orthoquartzite quarry sites have been located in western Wisconsin in recent years, Silver Mound was the largest and most intensely used source of orthoquartzite in the Midwest.

Spear-tips made from this Hixton Orthoquartzite have been found as far away as Mammoth Cave in Kentucky. Some of these points have been dated at nearly 12,000 years old, revealing that Silver Mound was one of the first places humans visited in Wisconsin.

Although this site has been investigated since the 1850’s, few details are known about the original activities which took place here. Over the past century, the mound and its surrounding area have experienced some disturbances including futile small scale mining for silver, agricultural plowing, logging and erosion resulting from these activities. Fortunately, much of the mound remains relatively unaffected by modern activities, and evidence of past utilization is abundant, making this one of the best examples of pre-European quarrying and knapping in North America. Because of its importance and preserved condition, the site has been listed on the National Register of Historic Places, and efforts for continued preservation are ongoing.

The first people known to occupy or visit the Silver Mound area were bands of nomadic people that archaeologists call Paleo (“oldest”) Indians. When they arrived 12,000-9500 years ago, much of northern and eastern Wisconsin had only recently been covered by glaciers. The land surrounding Silver Mound was south and west of the glacier’s path, and while quite cold, was lush with vegetation, providing ideal habitat for now-extinct animals such as the mammoth and mastodon — woolly elephants which were larger than their modern counterparts.

These large animals (called megafauna) provided many of the materials needed by the Paleo Indians to survive in such a harsh climate. Meat was used for food, bones were used to make tools and perhaps even houses, and fur was used for clothing to protect themselves from the cold weather. Since animals were probably their main food source, the Paleo Indians traveled extensively, either trailing herds or on the lookout for new ones.

Roaming the landscape, the Paleo, Indians soon came across Silver Mound, and here found a wonderful source of stone for making tools. A wide variety of tools were made, although most of them were used for hunting, butchering, or processing animal hides. The primary weapon used for hunting were projectile points, ( hafted onto spear shafts. Stone knives cut the fur or meat, and hide scrapers were used to deflesh and dehair the animal skins. 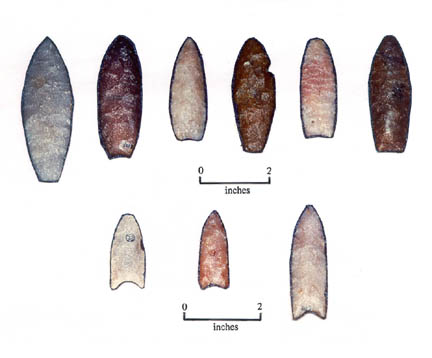 Projectile points made from Hixton Orthoquartzite 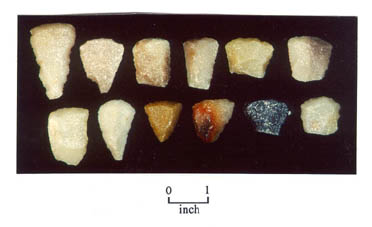 Scrapers made from Hixton Orthoquartzite

Knives made from Hixton Orthoquartzite

How do we know people were at Silver Mound 12,000 years ago?

Distinctive “fluted” points have been found embedded in mammoth and mastodon skeletons in other parts of the country, and Carbon 14 testing done on the bones dated them to 11,000-12,000 years before present. No confirmed kill sites have yet been found in Wisconsin, but point styles found here are the same as those carbon dated in others areas. The similarity of point styles implies that the Wisconsin points are also that old, and that people inhabited the area at that time.

After the glaciers melted, the people who lived in Wisconsin had to adapt to changing climatic conditions and animal habitats. Mastodons, mammoths and other megafauna became extinct by about 10,000 years ago. At the same time, the climate became warm and dry, creating a prairie-like habitat perfect for bison. Numerous bison bones have been found in nearby Buffalo and Trempealeau counties. This particular species, Bison Occidentalis, is now extinct, but was known to have lived in the United States until 8,000 years ago. Throughout this period hunting continued to be a prime activity, and the bison hunters continued to return to Silver Mound to use Hixton Silicified Sandstone to replenish their stone tools. 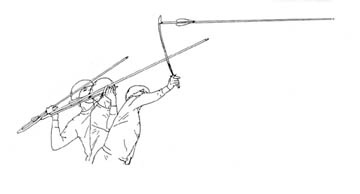 Throwing a spear with an atlatl (drawing courtesy of Bill Tate)

During the Archaic culture (9500-3500 years ago), Silver Mound was surrounded by a prairie/savanna. This prairie would have been an ideal habitation for bison, elk and deer. During this period Archaic hunters continued using spears and spear throwers, called atlatls. The atlatl provided the hunter more power and distance. The end of the Archaic culture coincides with a shift to a moister environment, and increased forest. By about 5,000 years ago bison herds were probably gone from Wisconsin. Instead, the people focused on hunting deer and elk and harvesting fish and other floodplain resources. 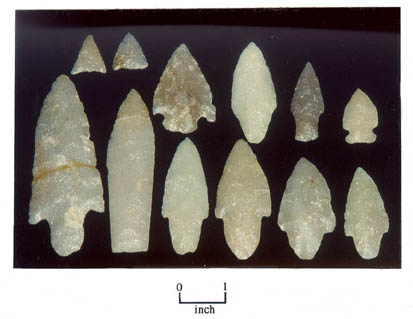 Projectile points from the Archaic, Woodland and Oneota cultures

The last two prehistoric groups to reside in Wisconsin were the Woodland (1000-1500 years ago) and Oneota (500-1000 years ago) cultures. The climate during these two periods was very similar to that of the present. Silver Mound was on the edge of two environmental areas, with prairie and deciduous forest to the southwest and conifer/hardwood forests to the northeast. The mixture of pine forests, oak savannas and conifer swamps was the perfect setting for animals such as deer, elk, black bear, and others which are still living in Wisconsin today, and a variety of plants such as nuts and berries.

Hunting continued to be the prime source of food for these cultures, although corn agriculture was introduced about 1000 years ago. Also, the introduction of the bow and arrow around 1200 years ago generally replaced the atlatl. Still the people returned to Silver Mound for stone tools supplies.

The first Euro-Americans in Jackson County were aware that this area had been utilized. Walking through the woods, they noticed quarry pits,  which the Native Americans had dug hundreds and thousands of years earlier to obtain Hixton Silicified Sandstone. The first Europeans assumed the extensive pits meant valuable metals must exist here. 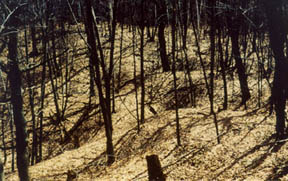 One account suggests that the first European searching for metal at Silver Mound was the French explorer Pierre LeSuer, whose presence is documented on the Mississippi River as early as the year 1700. The first European settlers in Jackson County arrived in the 1840’s, and soon came to accept the legend of a “lost silver mine” in the area. This legend suggests that a party of miners arrived in 1855 equipped with a beaver pelt map, which they had received from a Frenchman in St. Louis, leading them to Silver Mound. They found no silver, and by 1860 the idea of silver being found there was discredited by geologists, although further mining was attempted by prospectors in 1871-1873 and 1895.

Over the years, Silver Mound has been used for many purposes including a campground for the past several decades. Other sections of Silver Mound and surrounding areas have been used as homesteads and farmland since the 1840’s. The area which was once a marshy habitat for mammoths and mastodons has become fields used for growing crops such as corn and alfalfa. 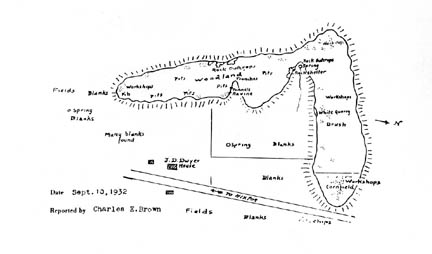 The many activities which have occurred at Silver Mound over the past 12,000 years have changed the mound’s appearance. The quarrying efforts of the Native Americans, and the mining and agricultural efforts of Euro-Americans has caused erosion to occur in several places. Several ravines, including the one opening up to KOA campground, have been expanded by these activities, resulting in soil washing to lower areas surrounding Silver Mound. Artifacts from any of the cultures mentioned above could be buried at Silver Mound by this soil.

The first professional archaeologist to examine Silver Mound was Will C. McKern of the Milwaukee Public Museum in 1928. Charles E. Brown, of the State Historical Society of Wisconsin, created the first detailed records (notes and maps) of parts of the mound in 1932 and 1933. Since the 1960’s several excavations have been conducted at specific areas within Silver Mound, by various universities, confirming the use of Silver Mound by prehistoric people. 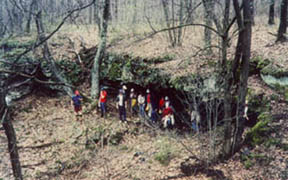 Dwyer Rockshelter rockshelter has long been the focus of interest at Silver Mound. An 1860 geological account of Silver Mound mentions this cave and a smaller one nearby which contained many glyphs. When visited by archaeologist Charles E. Brown in 1932 and 1933, the name of owner “Harry Dwyer 1919” was carved into the top of the front of this shelter, where it remains today. Unfortunately, the glyphs noted in the 1860’s are no longer visible.

Although the shelter was undoubtedly dug into many times since 1850, the first archaeologist to dig here was Harris Palmer of Platteville, who found flakes and pottery fragments. More intensive excavations were undertaken by UW-Oshkosh and UW-Milwaukee in the 1970’s and carbon 14 dates as early as 9500 years ago were obtained from charcoal found beneath a rock on the floor of the shelter. This shelter is now interpreted as a seasonal campsite by peoples coming to Silver Mound to replenish their stone tool kits, and was undoubtedly used as such for thousands of years. 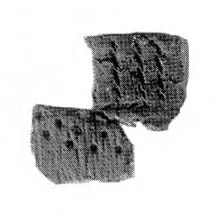 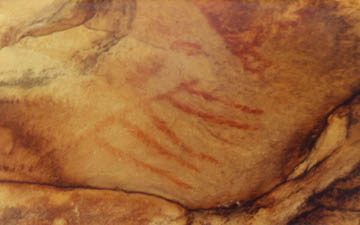 There are at least two remaining rock art sites at Silver Mound, including a small overhang near the Dweyer Rockshelter contains four red-painted figures on the roof of the rockshelter. On the ceiling of this rock outcrop is a series of faint red paintings. One image is a bird-like figure composed of five vertical bars  curving downward from a horizontal bar . Other figures appear to represent partially eroded quadrupeds such as buffalo. The legs and bellies are relatively clear, though the heads and backs are largely gone.

Prehistoric quarrying is still evident on Silver Mound. The slopes of the mound show hundreds of depressions that are quarry pits. The pits range from less than 3 feet to over 10 feet in depth, and up to 30 feet in diameter. Proof that these depressions were at one time quarrying pits is exhibited by flakes found in rodent spoil piles, logging scars and roots of fallen trees.

Survey of the quarry pits in 1932 by Charles E. Brown led to the discovery of several “rounded quartzite hammers” which weighed between five and ten pounds. Brown felt the hammers had been used by prehistoric people to break up the rock, as there were large layers of Hixton Orthoquartzite lying outside the pits.

In addition to the use of Silver Mound for camping and agricultural purposes, portions of the mound have been purchased by the Archaeological Conservancy whose mission is to preserve archaeological sites throughout the United States. Their objective in purchasing this land was to ensure that future use on Silver Mound will not damage its cultural resources.

The following are a few resources that will help you learn more about Silver Mound: