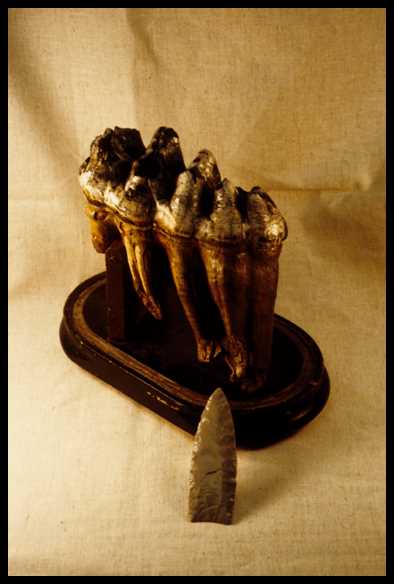 Mastodon tooth and point We know the story of the Chipmunk Coulee mastodon tooth (pictured below) thanks to the investigative skills of some archaeologists at UWL.  In the mid-1980s when Jim Theler began teaching at UWL, a professor in the Department of Biology told him about a mastodon tooth that was in their teaching collection, and offered it to Theler for archaeology. It was a great specimen, and he was happy to have it to show thousands of students over the years. The biologists did not know where it was from, and there was no information with the tooth itself. A colleague at MVAC who was doing research on Native American sites in the La Crosse area looked at an annual “handbook” of La Crosse history published in the 1920s and saw a note that a mastodon tooth and other bones had been found at Chipmunk Coulee the previous year, and the story referred to the La Crosse newspaper. Another interested researcher then worked his way back through each daily issue of the newspaper and at last found the article on that tooth with a photograph. In the early 1920s, a man named Elmer Harold found bones of a mastodon eroding from a stream bank in Chipmunk Coulee, in southwestern La Crosse County. The find location was visited at that time by a professor from UW–La Crosse, and a short article appeared in the La Crosse newspaper with a photo of a five-pound mastodon tooth and a description of the find by Mr. Harold.   It was the same tooth that was now at the university. In 1985 Theler and colleagues visited Mr. Harold, who still lived in Chipmunk Coulee, just before he passed away, and he told them about finding the mastodon bones and tooth more than 60 years before. [Note, the Clovis point in the illustration did NOT come with the tooth, but was added for scale.]