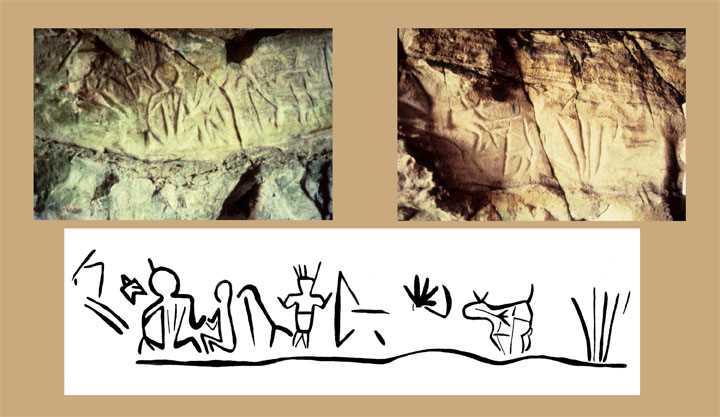 Indian Cave petroglyphs Indian cave is a narrow, low, natural fissure cave/shelter containing prehistoric petroglyphs.  Regional comparisons suggest that prehistoric activity in the cave probably dates to the late prehistoric period, ca. 250 B.C. to 1500 A.D., although no diagnostic artifacts have been found in the vicinity.  A panel of petroglyphs and two petroglyphs opposite the panel are present in the cave.

The panel consists of at least nine petroglyphs with a variety of figures represented.  Possibly representing a story panel, it shows (from left to right): two seated human figures, one of which is in profile, with an abstract bird-like figure and pipe figure perched about the shoulder of the first human; an abstract group of carvings (possible mammals); a standing human figure wearing headgear with arms outstretched; a large bow strung with arrows pointed toward a large mammal figure with a hand representation to the left of its head; a large hand representation at the rear of the animal; and finally a long curved line underscoring the complete panel.