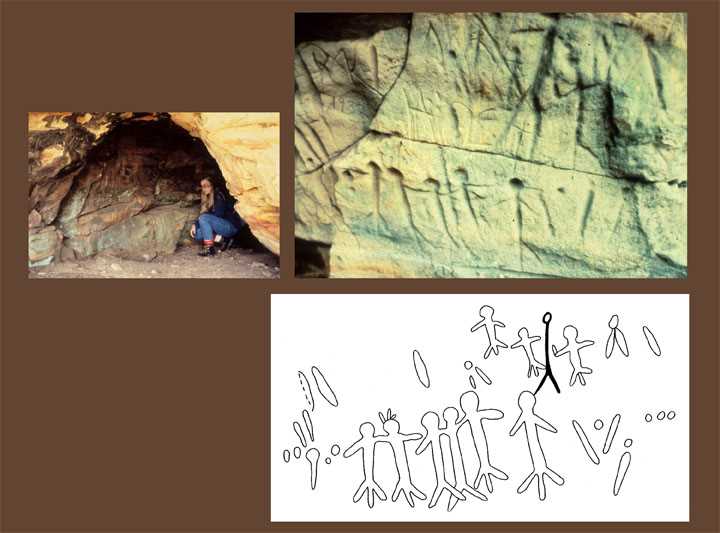 Larson Cave petroglyphs Larson Cave is a small, naturally formed cave/shelter with precontact petroglyphs and occupation debris. No diagnostic artifacts have been found there, but regional comparisons suggest the cave was probably used between about ca. 250 B.C. and A.D. 1500.  A panel of figures is visible at the entrance to the cave, and additional markings are located within it.

The panel has two rows of mostly human stick-like figures, some joined together at the arms and some standing alone.  The figures appear to have gender designations and vary in size, with “males” slightly taller than “females.”  Three small “male” figures appear in the top row. One seems to be carrying something in his hand; another appears to be wearing headgear.  A group of two figures and a group of three figures are each joined at the arms. The panel has several other carvings, mostly circles or lines. A long groove underlines the panel. This panel is the first thing visible to anyone approaching the cave.  One suggested interpretation is that the figures might represent a mythical, ancestral, or corporal social group recognizable to anyone approaching the cave.

Left: Cynthia Stiles, former MVAC Regional Archaeologist, at the entrance to Larson Cave in the 1980s.