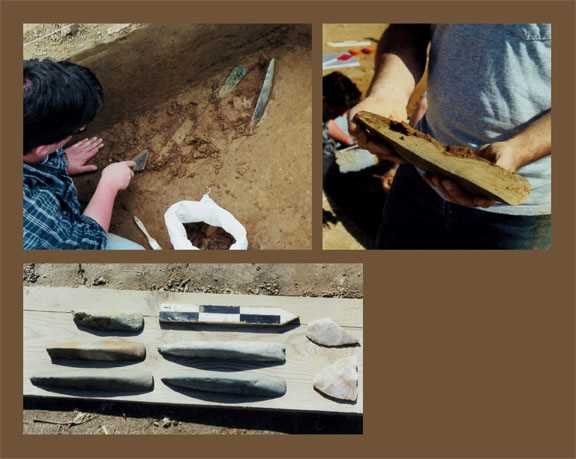 Liska Adze In 2001, Terry Liska of rural Ferryville, Crawford County, Wisconsin, was installing an underground cable and found two large ground stone tools made of basalt, plus portions of a chipped stone blade made of Hixton silicified sandstone. MVAC staff went to the location and found three more of the ground stone tools. The five basalt tools are “trihedral” adzes, three-sided in cross-section. They were made by chipping basalt into a rough form and then grinding it into its final shape, with concave cutting edges. Basalt is a hard, igneous (volcanic) rock that often occurs in a columnar structure. The adzes appear to have been made from such columns. Basalt and the Hixton blade are not local to Crawford County. Given the adzes’ large size, this cache appears to represent a set of woodworking tools—perhaps for making dugout canoes?

Trihedral adzes are not well dated. Ernie Boszhardt believes they are late Paleoindian, while Jim Theler would place them in the early portion of the Archaic cultural stage.

More information on the Liska Cache is available in a 2005 article by Robert “Ernie” Boszhardt: “Triangular Cross-Section Adzes from the Upper Mississippi River Valley: The Liska Cache,” The Minnesota Archaeologist, Vol. 64, pp. 91-103.