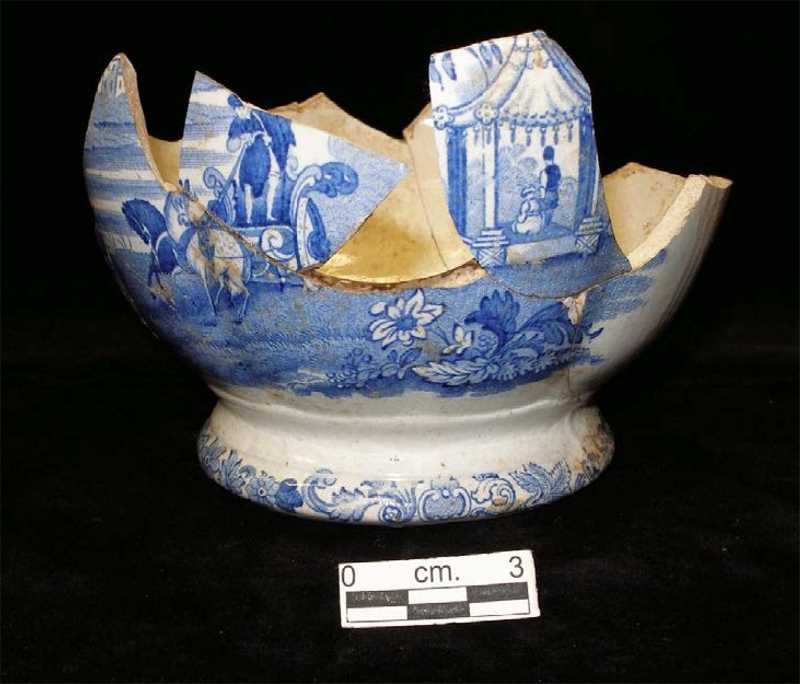 Whiteware Recovered during the 2006 excavations of an early 1830s-1840s privy in Prairie du Chien, Wisconsin this lower half of a blue transfer print whiteware pitcher has a scenic design called “Damascus” (Williams and Weber 1978:120-121). The scene shows a man in the foreground holding a spear and driving a chariot pulled by a black horse and a white horse. To the right is a gazebo with a fringed roof and two men inside, one standing and one kneeling. To the right of the gazebo is a tree. To the left of the chariot are three men talking, two of them standing and one sitting. The scene has flowers and bushes in the foreground. On one side of the bowl, a building is evident in the background. The base of the bowl has the impressions “W” and “ADAMS,” which stand for W. Adams and Company, who produced this design circa 1819–1864 (Williams and Weber 1978:120). The base also has the number “10” printed on it. This vessel most likely dates to the mid-1830s (Robert Mazrim, personal communication, 2009).