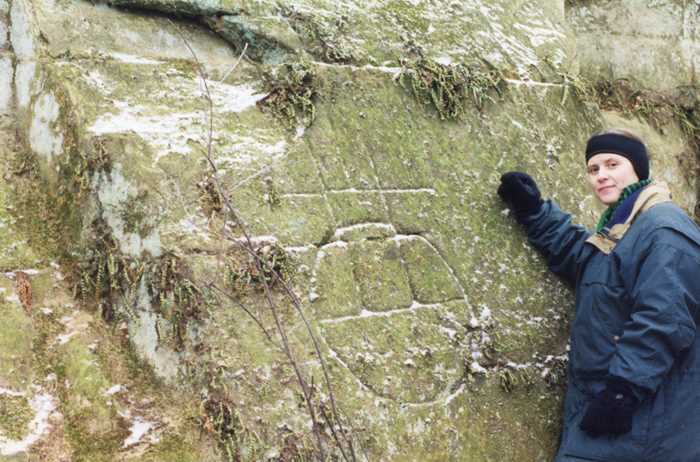 Perrot State Park – Historic Solstice-Marking Petroglyph The petroglyph shown here is located on a bluff in Perrot State Park. Research by Alton Fisher (1987) and Bill Green (1992) indicates that this petroglyph was almost certainly carved by Towne L. Miller, who was the cook on the Milwaukee Public Museum (MPM) archaeological expedition working in Trempealeau County in 1928.

Fisher nicely summarizes the petroglyph’s origin in his Abstract (Fisher 1987:388):

“A petroglyph carved on the face of a sandstone outcrop on the east shore of Trempealeau Bay within Perrot State Park is believed by some to be a prehistoric solstice marker. Competent archaeologists familiar with the locale did not report its presence prior to mid-summer 1928. The petroglyph shares many graphic elements with the logo of the Roycroft Shop, which existed in the early decades of this century. The chef of the Milwaukee Public Museum’s archaeological field camp which was located in the Trempealeau area in 1928 had been a member of the Roycrofters before World War I and sometimes used their logo to mark his personal possessions. It is very probable that he carved the petroglyph.”

The Roycrofters were artists and craftspeople associated with the Arts and Crafts movement that greatly influenced American design in the early 1900s. The Roycroft community was founded by Elbert Hubbard, who was an interesting character. An online search will bring up all kinds of information on the movement, its participants, and their lasting impression on American culture. The lasting impression on a bluff in Perrot State Park is one we wouldn’t condone today! But it gives us an unusual and interesting glimpse into events nearly a century ago.

Green, William
1992 Additional Information on the Recent Origin of a Wisconsin Petroglyph. The Wisconsin Archeologist 73(3-4):237-244.