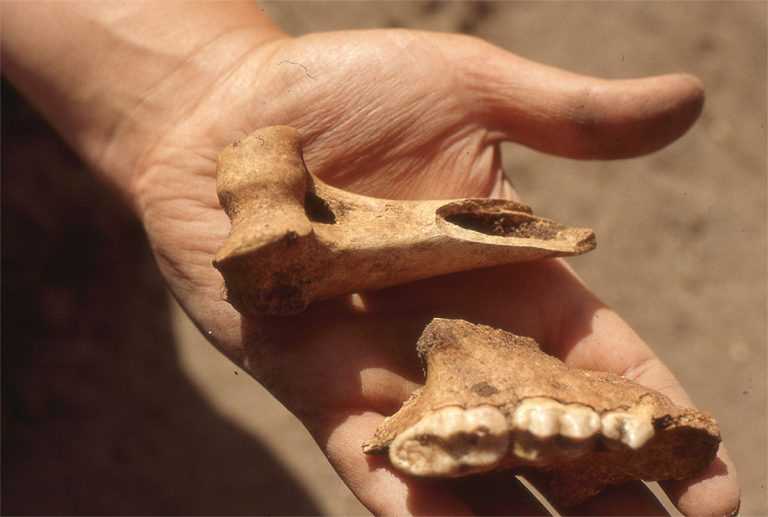 Bear and wolf bones This partial maxilla (upper jaw) of a bear and distal humerus (upper front leg) of a wolf were found at the edge of pit-type Feature 167 at the Pammel Creek site in La Crosse. The wolf humerus had cut marks at the distal end, probably from separating the humerus from the lower leg bones (radius and ulna). A fragment of a beaver skull was found as well. Pammel Creek is one of many late precontact “Oneota” village sites in and around La Crosse; it dates to about AD 1400-1500.

The American black bear (Ursus americanus) and the gray wolf (Canis lupus) are striking large mammals in the Upper Midwest. Black bear bones occur in small numbers at many Oneota habitation sites in western Wisconsin, most commonly as toe bones. This pattern might relate to foot bones being left on a bear’s skin (Martin 2020). Bear teeth, either isolated (loose) or still in the jaw bones, are less frequent at Oneota sites, but they do occur. They are also found at some Woodland sites. Wolf remains are very rare at all sites in our region.

Martin, Terrance J. (2020). Use of Black Bears in the Western Great Lakes Region and the Riddle of the Perforated Bear Mandibles. In Bears: Archaeological and Ethnohistorical Perspectives in Native Eastern North America, edited by Heather A. Lapham and Gregory A. Waselkov (editors), pp. 109–139. University of Florida Press, Gainesville.