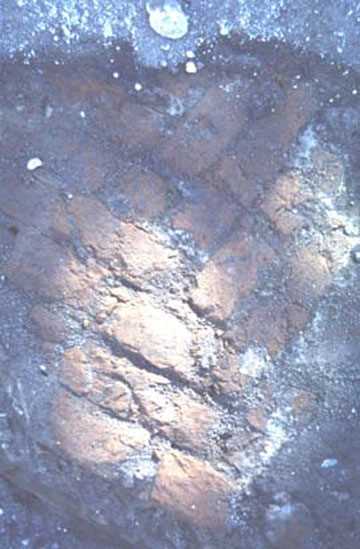 Brick floor During the 1999 excavations at Second Fort Crawford (Prairie du Chien, WI) hundreds of bricks were found scattered throughout the excavation area. While small samples of brick were still intact in terms of flooring, most of it was scattered throughout the site and out of context. The bricks were generally a reddish brown color, were unglazed, and measured approximately 8x4x2 inches. A few samples of glazed bricks were found, but these were fragmentary, and may have been intrusions from later occupations.

Archival documents indicate that the basement rooms (or kitchens/mess halls) were covered in brick, and it is unknown if some of the interior walls in the fort would have been brick also. Room I in the Enlisted Men’s Quarters exhibited approximately 1 1/2 by 1 foot of intact flooring where the room is adjacent to the current boulevard. This flooring was in a herring bone design pattern. Fireplace II also retained its floor. The bricks in the fireplace were charred on the surfaced, and were very friable.

Pictured is a small section of patterned brick flooring from Room VI in the Enlisted Men’s Quarters.