The Valley View site was UWL’s first local archaeology project. In 1978, four years before MVAC was created, topsoil removal for construction of the Valley View Mall exposed the well-preserved remains of a late precontact Oneota village. Local collectors familiar with the area’s plowed fields knew the location as a “hot spot” for artifacts. Jim Gallagher, a faculty member at UWL, gathered students and volunteers to map the site and conduct limited excavations. Jim also contacted UW-Madison, where two archaeology graduate students, Kathy Stevenson and Jim Theler, agreed to analyze some of the plant and animal remains. 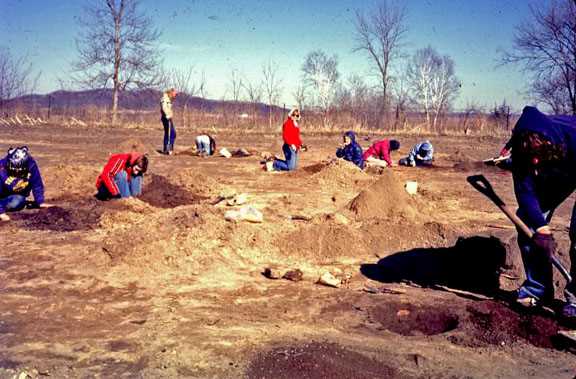 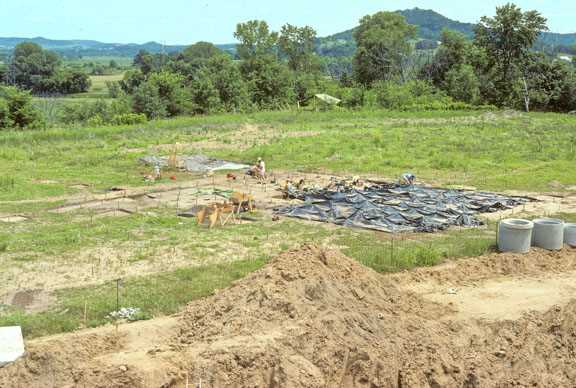 Overview of the Valley View excavation in 1979. 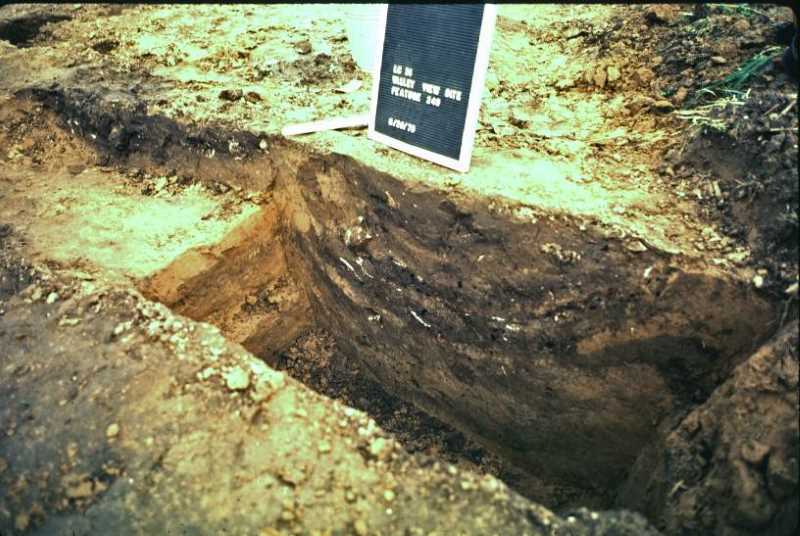 Feature 249 was one of the garbage-filled pits along the inside of the palisade.

This map shows the features uncovered in 1979.

Discovery of the site came too late for the mall’s developers to change their plans. Planning delays postponed the construction, and the developers graciously allowed a longer excavation in 1979 and offered to preserve the portion of the site outside of the construction area. Dayton-Hudson Companies and the Dayton-Hudson Foundation also provided support for the excavation. Jim Gallagher directed the 1979 work, along with Kathy Stevenson, who used the site for her doctoral dissertation. UWL’s first field school was held there for eight weeks, and volunteers continued the work for another three weeks.

The Valley View excavation focused on the part of the site that would be destroyed by mall construction. The project uncovered nearly three hundred Oneota pit features (refuse or storage pits) filled with animal bone, charred plant remains, pottery, and stone tools and debris. Traces of a palisade around the village also were discovered. Large, garbage-filled pits inside the palisade wall might have been borrow pits for mounding dirt along the palisade.

The animal remains at Valley View showed the typical Oneota mix of large and small game, agriculture, and heavy use of floodplain resources. With few overlapping pit features, and abundant remains of fish, mussels, turtles, and other river and wetland resources, the site seemed to reflect a short-term, warm-season occupation. Flotation led to the recovery of fragile crayfish shell and eggshell fragments—an unusual find, and a great seasonal indicator. 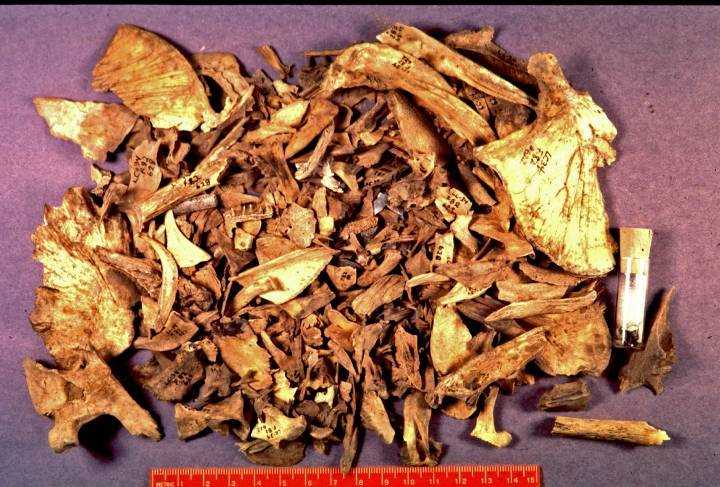 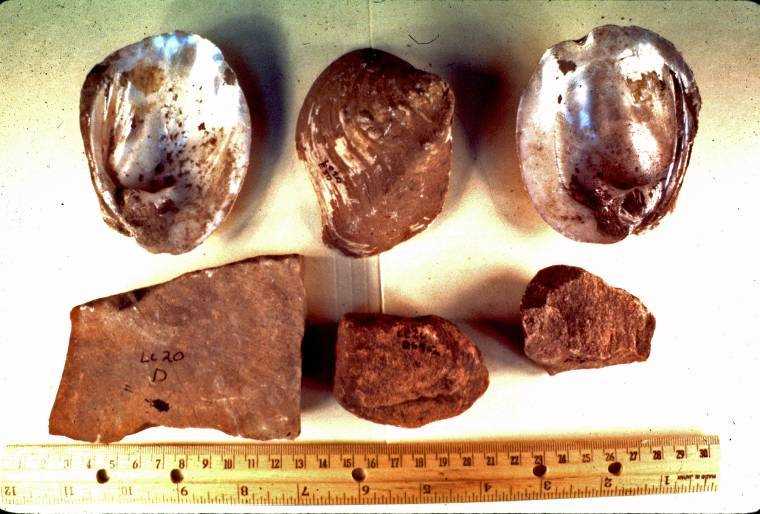 The mussel shells in the top row were very well preserved. 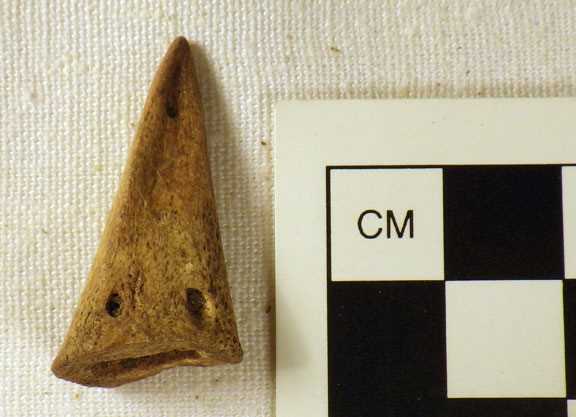 This tiny projectile point was made from a deer’s 3rd phalanx—the small bone inside the hoof. 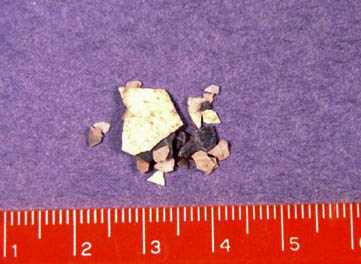 Some of the site’s tiny pieces of eggshell were identified as giant Canada goose.

Valley View was the first (and so far the only) palisaded Oneota site discovered in La Crosse. The field evidence was sketchy—small, shallow remnants of a narrow trench on the west side of the site, and two parallel, diffuse stains on the north side. Fortunately, discovery of a map made by mound surveyor T. H. Lewis in 1885 clarified the situation. Lewis mapped a palisade embankment ringing the site and two trenches to the north. (All were later obliterated by plowing.) Redrawn from Lewis’s measurements, these features superimposed perfectly on the 1979 excavation map.

Oneota sites in the La Crosse area date from about A.D. 1300 to A.D. 1625. How does Valley View fit in? Radiocarbon dates from the early 1600s place Valley View at the end of the Oneota occupation. Similar Oneota sites across the Mississippi River in Minnesota are later and have European trade goods. The abundant plant and animal remains at Valley View, and the presence of materials from other regions, show no signs that its people were under stress. Yet the presence of a palisade, especially in an easily defended location, suggests that they wanted to be able to defend themselves. Perhaps they were feeling the effects of European contact in other regions, decades before Europeans actually reached the La Crosse area. 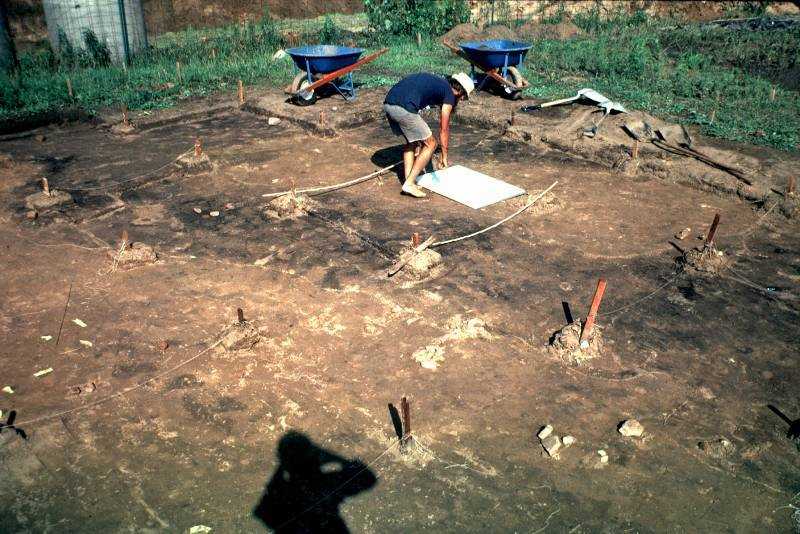 The northern trench stains were dark and diffuse. 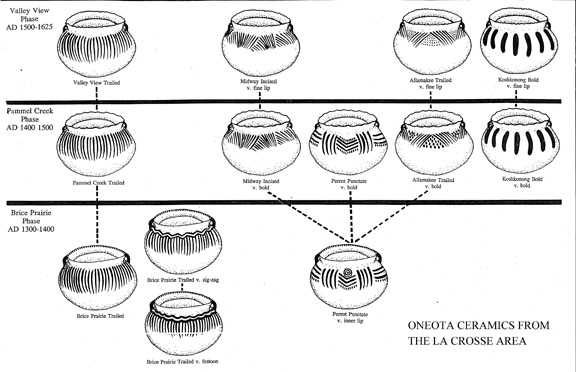 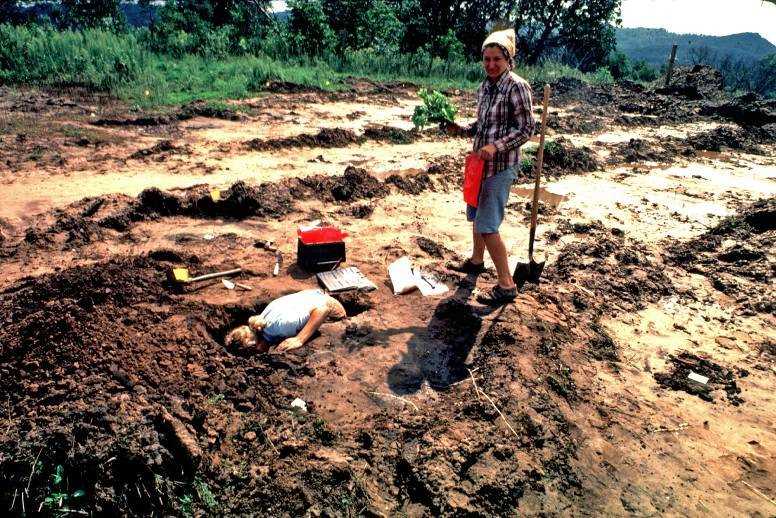 After the field school and the volunteer excavation were over, the crew and equipment trailer headed back to campus, and the bulldozer started stripping away part of the site. Kathy Stevenson coaxed Jim Gallagher into letting her sample one more feature. Field school student Rita Landgraf stood guard as Kathy excavated and the bulldozer got closer. The feature was a deep, bell-shaped storage pit with a cluster of pottery at the very bottom. The pottery turned out to be the only reconstructable pot from the site—now on display at the Archaeology Center and Laboratories on the University of Wisconsin – La Crosse campus.

Valley View was UWL’s first major excavation—and the beginning of years of work on local Oneota sites that lay in the path of development. Fortunately, part of the Valley View site was left in place and is still preserved today. The excavation yielded a tremendous amount of information that has helped us understand how people lived four centuries ago. 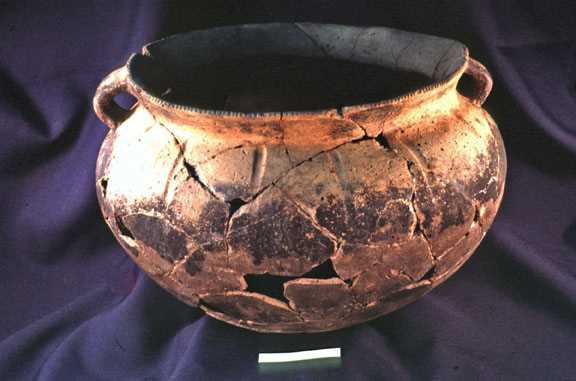 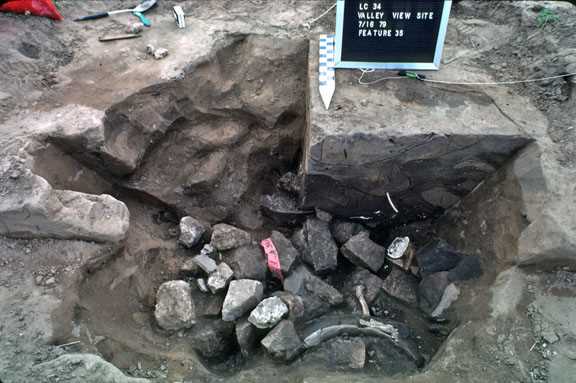 Feature 35, with its mix of animal bone, pottery, stone tools, and other materials, was only one of many informative features.