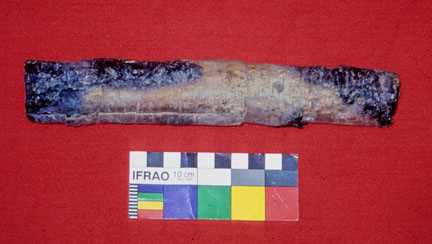 Birch bark torch Remnants of birch bark torches litter the relatively undisturbed margins of the floor of Tainter cave in southwestern Wisconsin. Many are burned to small fragments that were probably discarded. Several larger fragments, including a nearly complete torch, could have been used again. Birch bark is highly resinous and burns brightly. When the sturdy yet flexible bark is stripped from a tree, it can be rolled to form a tight, candle-like coil. Lighting the end of a well-made torch produces a reliable flame that can burn for a half hour or more. Presumably, the birch bark torches found in Tainter cave provided the source of light for the prehistoric artisans in the cave’s dark zone.  Link to images from Tainter cave.