Rock art images that are carved or painted onto rock surfaces, are visual symbols that ancient peoples used to convey meaning in the absence of a written language.  Even though we often do not understand the exact meaning the images had for the people who made them, they are still beautiful connections to those who inhabited the earth before us.  Rock art stimulates our imaginations to ponder what life was like for the people who lived where we now live.  It encourages us to consider how their lives were different and in some ways similar to our own. This page contains information about nine rock art sites in southwestern Wisconsin.  Use this web site to see otherwise inaccessible examples of the some of the area’s rock art. 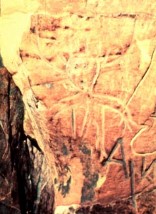 Gullickson’s Glen is a small overhanging rock shelter located in the Driftless Area of southwestern Wisconsin.  Petroglyphs at the site occur at the center and on either edge of the shelter.  The central panel contains the most petroglyphs but these are difficult to see due to a growth of moss and lichen on the petroglyphs.  Findings suggest that Native Americans were occupying the rockshelter as long as 2000 years ago, although the petroglyphs probably do not date farther back than 800 years ago.  Excavations at the site have uncovered remnants of Middle Woodland and Oneota occupancy.  Quartzite implements possibly used for making petroglyphs were found in the Oneota level.  Excavations uncovered numerous potsherds, quartzite knives, rubbing stones, a fragment of a pottery pipe and charcoal.  Bones from deer, elk, fish, turkey, bear, and mountain lion were also recovered.

Petroglyphs at Gullickson’s Glen have been interpreted as: a bison nursing her calf, deer, elk, eagles, fish, geese, swans, thunderbirds, and human figures.

The left and right pictures are of the same petroglyphs taken at different times. Over time, mosses and lichens have covered them. The four geese from the left picture are more difficult to see in the right image. Since the right photograph was taken, this section of the wall has fallen and these petroglyphs have since been destroyed.

Petroglyphs are carved into a sandstone outcrop near the top of a large ridge overlooking the Kickapoo River Valley.  Three complete bird figures and the wing of a fourth figure are visible.  Because the sandstone is soft and some areas are badly eroded, there may have been more than the four figures that are currently visible.  If the erosion continues at its present rate another figure will be lost in the near future.  A possible interpretation of the petroglyphs is that they may be humans in disguise or possible spirit beings.

Indian cave is a narrow, low, natural fissure cave/shelter containing prehistoric petroglyphs.  Regional comparisons suggest that prehistoric activity in the cave probably dates to the late prehistoric period, ca. 250 B.C. to 1500 A.D., although no diagnostic artifacts have been found in the vicinity.  A panel of petroglyphs and two petroglyphs opposite the panel are present in the cave.

The panel consists of at least nine petroglyphs with a variety of figures represented.  Possibly representing a story panel, it shows (from left to right): two seated human figures, one of which is in profile, with an abstract bird-like figure and pipe figure perched about the shoulder of the first human; an abstract group of carvings (possible mammals); a standing human figure wearing headgear with arms outstretched; a large bow strung with arrows pointed toward a large mammal figure with a hand representation to the left of its head; a large hand representation at the rear of the animal; and finally a long curved line underscoring the complete panel.

Larson Cave is a small, naturally formed cave/shelter with precontact petroglyphs and occupation debris. No diagnostic artifacts have been found there, but regional comparisons suggest the cave was probably used between about ca. 250 B.C. and A.D. 1500.  A panel of figures is visible at the entrance to the cave, and additional markings are located within it.

The panel has two rows of mostly human stick-like figures, some joined together at the arms and some standing alone.  The figures appear to have gender designations and vary in size, with “males” slightly taller than “females.”  Three small “male” figures appear in the top row. One seems to be carrying something in his hand; another appears to be wearing headgear.  A group of two figures and a group of three figures are each joined at the arms. The panel has several other carvings, mostly circles or lines. A long groove underlines the panel. This panel is the first thing visible to anyone approaching the cave.  One suggested interpretation is that the figures might represent a mythical, ancestral, or corporal social group recognizable to anyone approaching the cave.

The Running Deer petroglyphs are located in the same area as the Twin Bluffs petroglyphs.  Since no cultural materials have been found at the site, an age for the creation of the petroglyphs cannot be determined.  The petroglyphs become faint as they are exposed to the weather and are slowly eroded away.

Samuel’s Cave is a naturally-formed rockshelter containing prehistoric petroglyphs and pictographs that probably date to the Oneota occupation of the La Crosse area, (ca. 1300 to 1600 A.D.).  The rockshelter was discovered in 1878 by a boy, Frank Samuels, while trapping raccoons.  It had been sealed for at least 150 years by landslides of soil and rock coming down from the cliffs above.  At the time of discovery, the carvings and drawings on the walls of the rockshelter were reported to be in good to excellent condition.  Weather damage and vandalism over the past 110 years have obliterated many but not all of the prehistoric figures.  In prehistoric times, the rockshelter was probably used as a winter camp, and/or a special activity area.

This ancient deep cave site is filled with the most comprehensive set of prehistoric paintings in the Upper Midwest.  More than one hundred paintings and carvings are located in the cave, all magnificently preserved.  The art includes birds, deer, humans, and abstract designs.  This is a site of national and perhaps international importance.

The Twin Bluffs petroglyphs are on a small, flat, vertical rock face with a small rock ledge at the base. Although no diagnostic artifacts have been found, regional comparisons suggest that the shelter was probably used in the late precontact period, ca. 250 B.C. to A.D. 1500. The petroglyphs include seven thunderbird figures (five complete and two partial), one bird in profile, one mammal, and one mushroom-like figure.

White plaster waste around the thunderbird figure at the right is left from early attempts at recording the petroglyphs by making plaster casts. The waste cannot be removed without damaging the petroglyphs.  This is an example of how even well-intentioned efforts to record or save petroglyphs can inadvertently cause damage.

The Viola Rockshelter is situated part way up a small ravine in the bluffs that form the deeply cut Kickapoo River Valley.  In 1986 salvage excavations were undertaken and four periods of occupation were found ranging from ca. 1500 B.C. to 1000 A.D.  It is undetermined which if any occupation created the petroglyphs.  Three groups of figures compose the petroglyph panel.