The first inhabitants of the La Crosse area employed a number of techniques to create the tools they needed to survive and utilize the area’s resources.  Flintknapping is the process of creating stone tools (lithics) such as arrowheads, spear points, knives, drills, and scrapers.  Local clays were worked into useful containers.  Catlinite and copper were worked into useful and decorative items.  This section of the web site looks at the technologies used by the area’s first inhabitants.  Follow the links to discover more about these technologies.

Stone tools such as spear points were made through a process called flintknapping. Striking a rock in a particular way causes flakes/chips to come off. Learning to strike the rocks in the best way takes lots of practice and involves many mistakes. Even today, with patience and learned skill, people can make spear points out of stone. 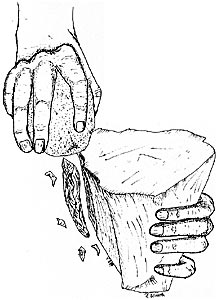 The first step in making a tool from a piece of raw material is to remove the weathered surface called cortex.  This is done by a technique called percussion flaking. The piece of raw material is struck with a hammerstone which causes large flakes to be driven off. Some of these flakes may be used later to make smaller tools such as scrapers or triangular points.

Shaping the piece into the desired tool form is the second step in the tool making process. Early stages of this process are done using a hammerstone. For the later and finer work a baton of wood or antler is used to thin the edges and to establish the form. 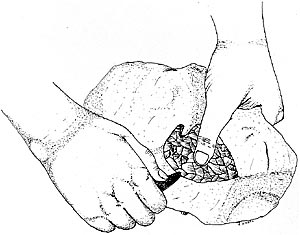 Pressure flaking is the last step in making the stone tool. Very small, thin flakes are carefully removed from around the margins of the tool by applying pressure with an antler tine. This type of flaking strengthens, straightens and sharpens the cutting edges of the tool and shapes the piece into its final form.

Early spears were different than spears people use today. Today we might find spears with points made of steel and shafts made of aluminum. Early hunters had to use the raw materials that were available around them. Instead of processed metals, they used wood and stone. Hafting is the process of tying a tool to a bone or wood shaft. The end of the shaft was notched or split and the tool was wedged into the notch. Animal sinew or plant fibers were probably used to tie the tool to the shaft. 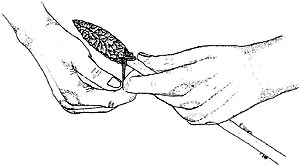 The shaft of the spear was made from wood. Long, straight pieces of wood make the best spears. The bark is stripped and then the piece is straightened if necessary. This took a lot of work and wood was not always available so early people came up with a way to cut down on the number of lost or broken spear shafts. Instead of having one long shaft with the spear point attached to the end, these early people made the shaft in two pieces. The spear point was attached to a short piece of wood, the foreshaft, which then fit into a longer shaft. This two piece construction allowed the main shaft to fall off after the point was stuck in the animal. In this way the shaft didn't get lost or broken if the animal was still able to run from the hunter.

Pottery is an extremely useful tool for archaeologists to aid in determining the age of a site. This is because each ceramic vessel began as a soft pliable medium on which prehistoric artists were able to create simple or complex designs. These impressions become “fossilized” when the pots were fired, and thus preserved to be collected in our time. It has been demonstrated through years of research that patterns of design were used over regional areas such as the Upper Midwest, and that these styles changed through time. This has enabled archaeologists to establish a ceramic chronology. By comparing a discovered vessel fragment to this chronology, one can gain a fairly accurate estimate of the age of the site from which the sherd was found.  Contemporary Native American artists combine tradition and new technology to create pots today. 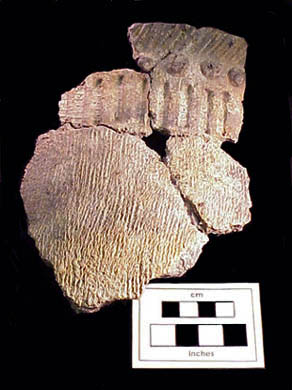 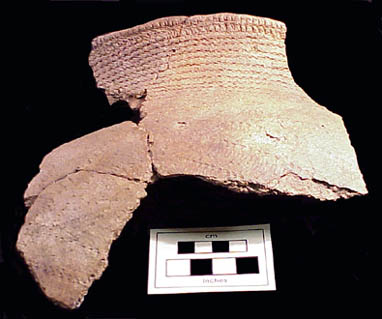 The ceramic chronology for this region begins about 2,500 years ago. For nearly 7,000 years before that, prehistoric groups undoubtedly had containers, but these were probably made of gourds, bark or animal skin, that rarely preserve. The final 2,500 years of the prehistoric sequence of this region begins with very crude grit tempered pottery which is recognized as Early Woodland. Subsequently, the ceramics become more refined and are distinguished by decoration into the Middle Woodland and Late Woodland periods. 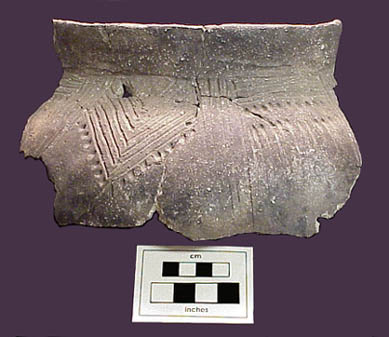 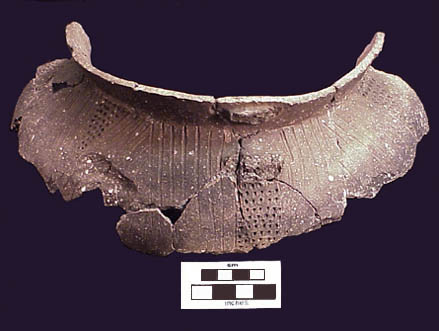 About 1,000 years ago prehistoric pottery was revolutionized by the use of crushed shell for temper. This allowed the construction of large vessels, and probably signifies a more sedentary lifestyle than for the preceding Woodland groups. Shell-temper ceramics are nearly always found at farming villages of the prehistoric group known as the Oneota culture which persisted until contact by European (French) in the mid to late 1600s.

People used materials around them as tools to decorate their pots. Fingernails, sticks, cords and shells were all used to decorate pots. How these tools were used and the designs that were made change from location to location and through time. As coils or slabs were added, early Woodland potters used a paddle wrapped with cord to shape the pot. This technique left a distinctive surface that showed the texture of the cord wrapped paddle. The potters then used their fingernail or sticks to make designs on the wet pots. Late Woodland people pressed cord or fabric into the clay near the rim of the pot. Clam shells were also rocked back and forth along the sides of the pot to create a unique zig zag decoration. Later Oneota peoples used their finger or sticks to decorate their pots. 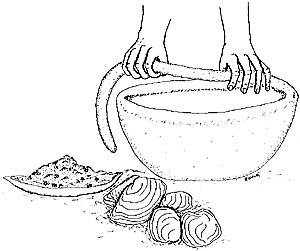 Step 1 — The first step in the pottery making process was to add temper to the raw clay. Temper is a non-plastic material which is added to the clay before it is worked. Molecules of clay adhere to the temper material and improve the quality of the clay. Temper is added to counteract shrinkage of the clay, it facilitates uniform drying and lessens the risk of the vessel cracking when fired.

Archaeologists are studying prehistoric pots to try to understand how they were constructed. At present, a variety of different techniques are thought to have been used, depending on the size of the vessel. One technique that has been suggested is called coiling. In this method, clay is rolled into a thick “rope” shape. These “ropes” or “coils” were placed one on top of the other and smoothed by hand or tool to make an even surfacelay adhere to the temper material and improve the quality of the clay. Temper is added to counteract shrinkage of the clay, it facilitates uniform drying and lessens the risk of the vessel cracking when fired.

Step 2 — The final shaping of the vessel was done by hand while the clay was still wet. The rim was straightened and sometimes pulled slightly outward. Handles were attached after the rim had been shaped to the desired angle.

Step 3 — Decoration was applied to the vessel when it was leather-hard. The pot was then allowed to thoroughly dry. 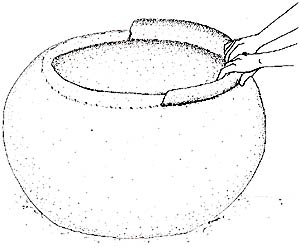 Drawing - pottery with rim being added 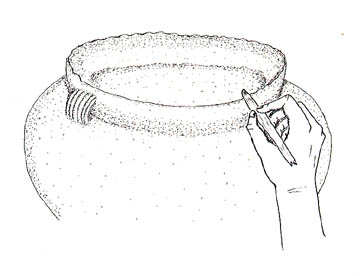 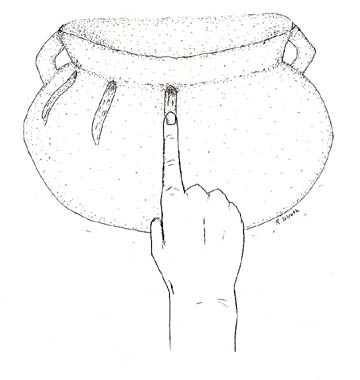 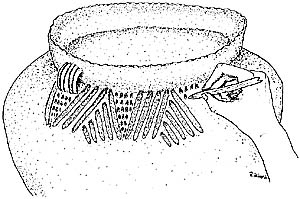 Step 4 — Firing was the final step in the pottery making process. As clay is heated its chemical structure is changed, the actual method used to fire the vessels is unknown, although it is know that kilns were not used. It is likely that the vessels were fired in an open-air situation.

The different colors seen on the pottery vessel are a result of the firing conditions. During the firing process areas that are exposed to oxygen turn reddish in color while areas that are covered and deprived in oxygen turn black or gray. Many pots have gray black spots on their exterior surfaces that suggest contact by a log during firing. Some pots still have black charred cooking remains on their inside or outside. Archaeologists hope that in the future it will be possible to analyze these remains to determine what was in the vessel and how the pot was used. 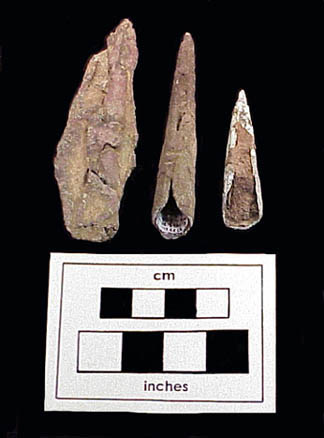 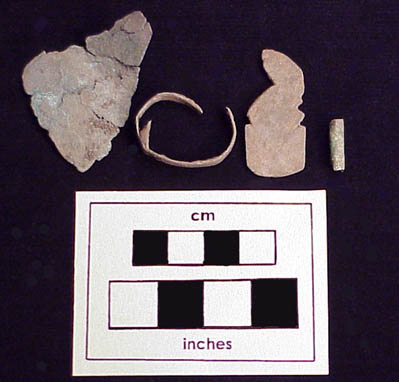 Copper tools and ornaments are occasionally found at La Crosse area sites. These items were made from pure nuggets that were mined in the Lake Superior region. Prehistoric “mines” were actually pits that were dug into the earth. Hammerstones or mauls were used to extract nuggets from encasing bedrock. Copper was also collected from stream beds flowing through the copper district. Bedrock in the Lake Superior region contains some of the purest copper in the world. During prehistoric times, implements and ornaments made from copper were traded all over the continent. Contemporary Native American artists still create metal objects today.

Copper was found on the surface in this area. Prehistoric "mines" were actually pits that were dug into the earth. Hammerstones or mauls were used to extract nuggets from encasing bedrock. Copper was also collected from stream beds flowing through the copper district. 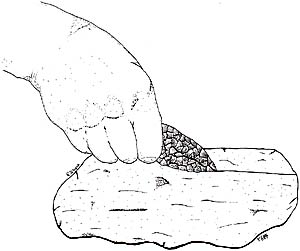 Drawing - copper being cut with a stone knife

Copper nuggets were transformed into usable form through the technique of cold hammering. Groundstone mauls or hammerstones were used to pound the nuggets into thin sheets. Extensive hammering causes the copper to become brittle. Heating the copper and cooling it in water during hammering prevents the copper from becoming brittle. 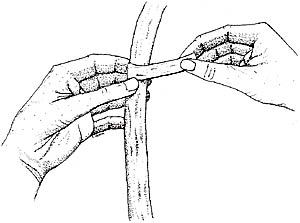 Drawing copper being shaped for an ornament

Once the copper was out of the surrounding rock it was hammered into the final desired tool or shape. Copper is very soft and can easily be hammered into useful shapes. A sharp stone knife was used to cut pounded sheets of copper into strips. These strips were then used to make rings, tube beads and other ornaments.

Pure copper is considered a soft metal and is easily worked, similar to pure gold and silver. For ornaments, such as rings and tubular beads, strips of copper were shaped by wrapping them around a toolmaker's finger, wrist or around different sized sticks.d can easily be hammered into useful shapes. A sharp stone knife was used to cut pounded sheets of copper into strips. These strips were then used to make rings, tube beads and other ornaments. 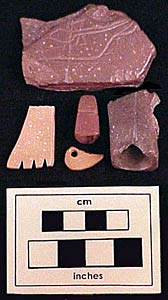 Catlinite, a type of pipestone, is a soft red siltstone named after the 19th century American artist, George Catlin. Catlinite outcrops occur in southwestern Minnesota, where traditional Native American quarries are preserved at the Pipestone National Monument.  Contemporary Native American artists still create objects from catlinite for ceremonial use and for sale.

Step 1 - Pipes and ornaments were first outlined into the piece of raw catlinite, using a stone tool, such as a chipped stone knife.

Step 2 - Once the pipe was outlined, a sharp flake or stone knife was used to cut the rough shape from the raw block. A groove was cut around the desired shape, then pressure was applied to snap the excess material off.

Step 3 - The corners of the block were shaved off and the desired shape and size was achieved by rubbing the pipe on an abrasive block of quartzite or sandstone.

Step 4 - Finishing touches such as fine shaping and design carving, were done with a sharp stone knife or engraving tool.

Step 5 - The hole in the pipe bowl was formed using a chipped stone drill hafted to a thin shaft. By holding the pipe between the feet or knees, and rotating the shaft of the hafted drill between the palms of the hands, a hole was slowly formed.

In the final step, the pipe maker polished the pipe. A wooden pipe stem, possibly decorated with beads, hair, porcupine quills and leather was then inserted into the bowl. 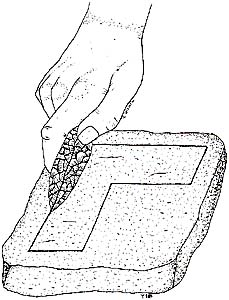 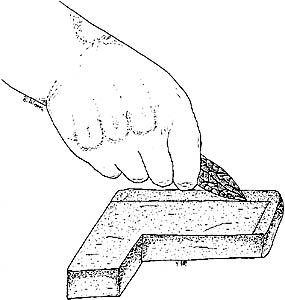 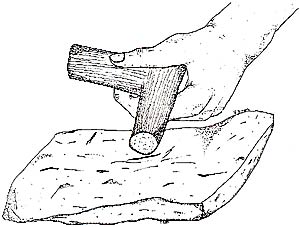 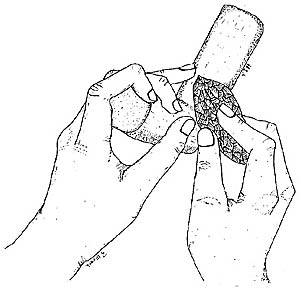 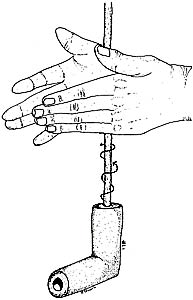 Drawing - catlinite being drilled to form a hole