Native American Artists Past and Present 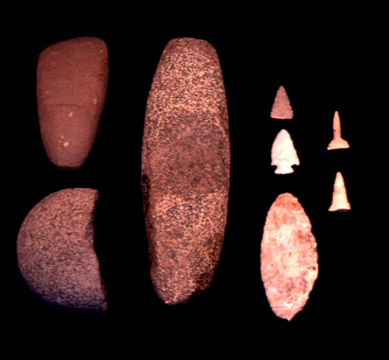 Pre-European Native Americans made tools from stone for cutting, scraping, and piercing. Examples of tools such as knives, scrapers, spear tips, arrowheads, drills and gravers are found archaeologically. The technology of making tools from stone is a process called flintknapping. It is not a lost tradition today, however, it is rarely used to make functional tools. Many of the stone tools made in the past were beautiful as well as functional, particularly points such as the Clovis and Folsom that were made over 10,000 years ago.

Tools such as screwdrivers, hammers, and knives are modern examples of tools found in your toolbox or kitchen that would have been made from stone in the past. Today these items are rarely made by individuals, instead they are manufactured by large companies. Archival images show the use of traditional materials continue to be used, such as the wooden hide scraper shown below, while metal tools replaced those previously made made from stone. 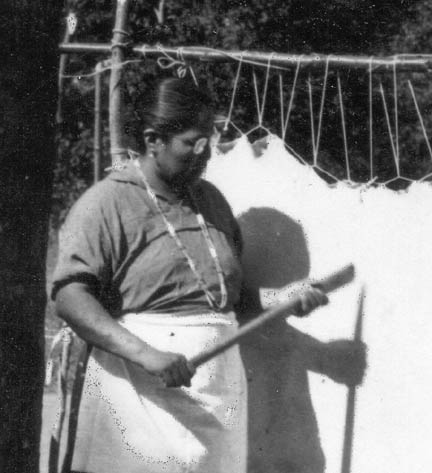 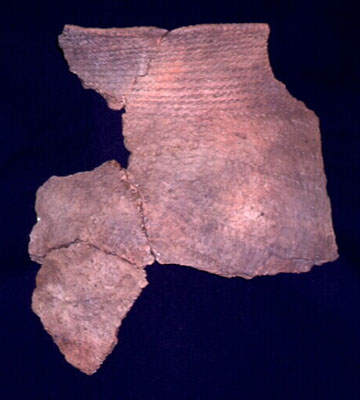 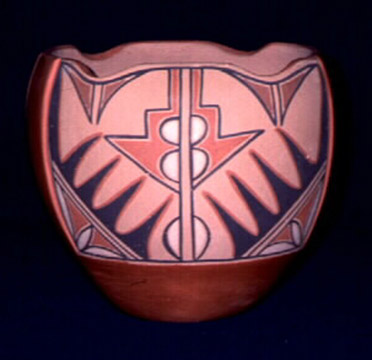 Throughout time people have needed and created containers that are both functional as well as beautiful. In the La Crosse area, pottery is the only example of containers found in the archaeological record. A few fragments of woven grasses are the only remains of weaving activities in the local archaeological record. From these limited artifacts and from examples of woven materials recovered from archaeological sites in other parts of the United states we can speculate that the early inhabitants of our area must have known how to make and use containers made from such natural materials as woven fibers and hides.

Contemporary Native people continue the art of pottery today with techniques and designs that are rooted in the past as well expressions of contemporary life. 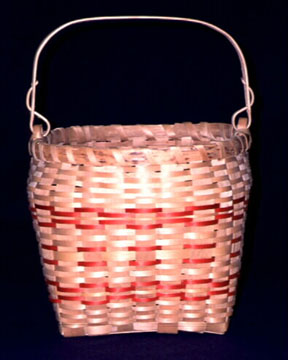 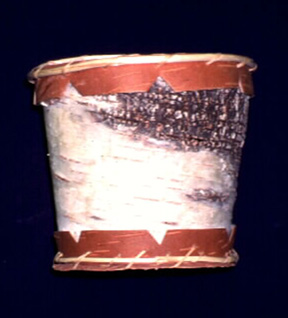 The art of making containers using woven materials is beautifully represented in the basketry of the Ho Chunk. Archival photographs show a skill that has been handed down through the generations. 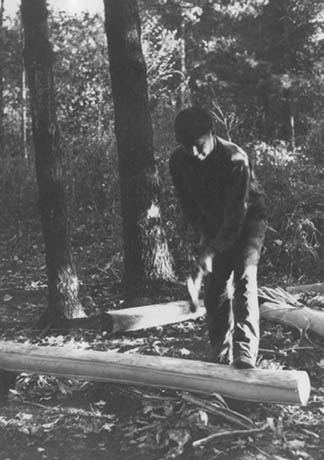 Martin Lowe pounding an ash tree log with the flat end of an axe before strips can be pulled off, thinned, and used as basketry material. 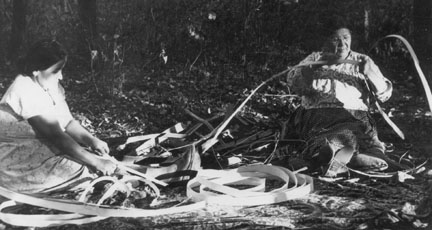 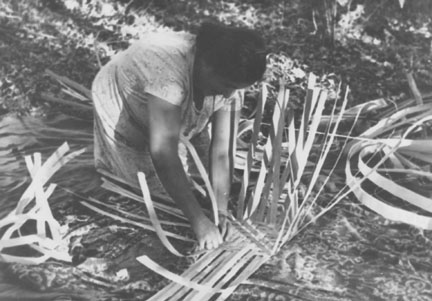 Mabel Lowe weaving the bottom of a basket. 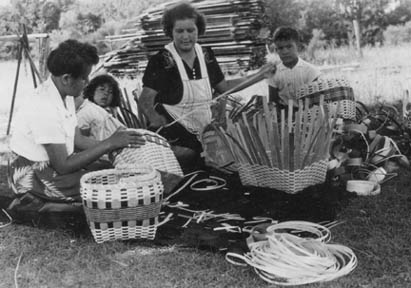 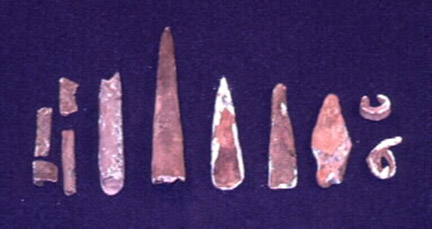 Copper artifacts made by the pre-European inhabitants in the La Crosse area.

Copper items were made for decoration along with serving utilitarian functions prior to European contact. Copper beads, spear points, awls, and fishhooks are a few examples of the items that were made. Ancient artists developed this technology about 5000 years ago.  Techniques of metal crafts or metallurgy have been passed down for many generations. Ho Chunk artists created both silver and copper ornaments and tools. 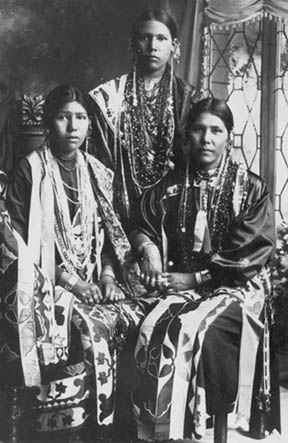 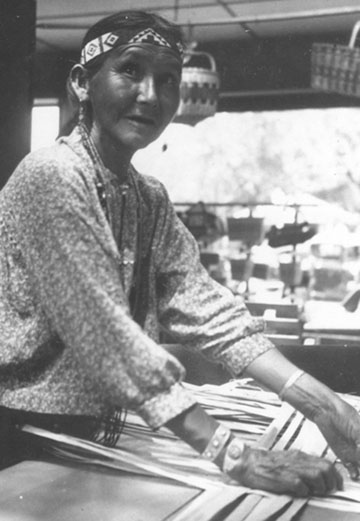 Susie Redhorn weaving the base of a basket wearing ornate jewelry.

Today Native artists in the southwestern United States craft beautiful objects from silver. Some pieces such as the concha have been made for generations in traditional ways, while others are made by more modern techniques. 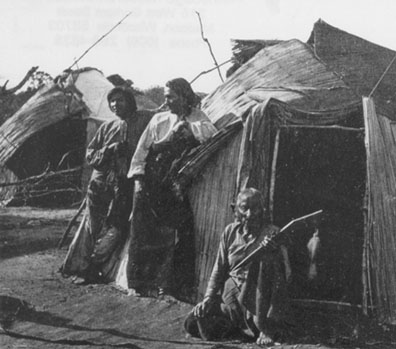 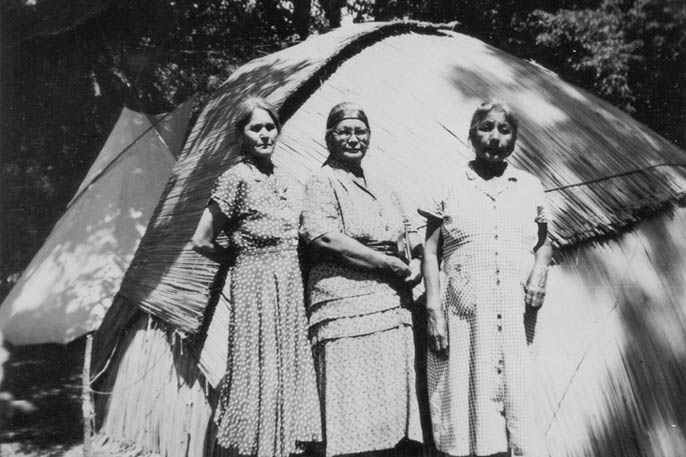 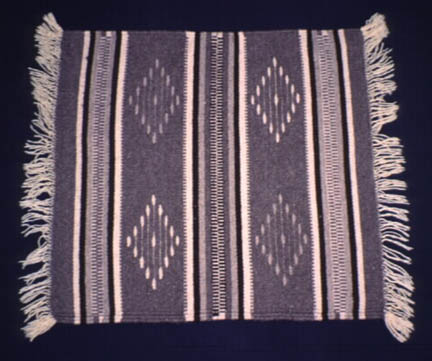 Weaving can be accomplished without the use of a loom by a process called finger weaving. This is a technique of weaving without warps or wefts. The fingers pick up the vertical warp threads through which the horizontal wefts are passed. This technique of weaving is centuries old and practiced throughout North and South America.

The Ho Chunk have used finger weaving for generations to make decorative sashes and bands as can be seen in the archival image of the young man wearing a sash. Linda Shegonee, a contemporary Ho Chunk artist made the turquoise, black and white child’s sash that can be seen below.

Sash made for a child by Linda Shegonee. 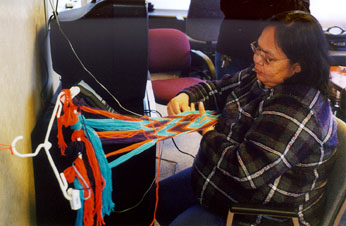 Linda Shegonee in the process of making a finger woven sash 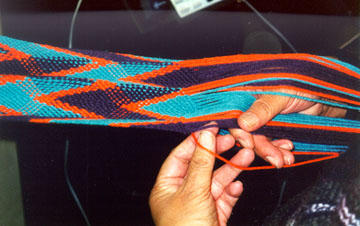 Close up of Linda finger weaving

Drawing of an etched catlinite tablet

Catlinite or pipestone is a type of rock that has been used by Native people for hundreds of years. In the La Crosse area archaeological examples of catlinite occur as pieces of raw stone and finished carvings. 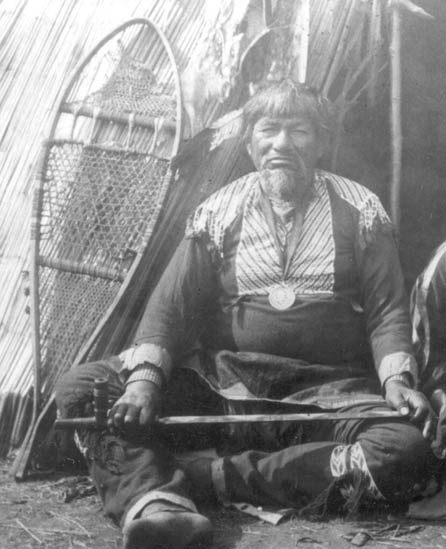 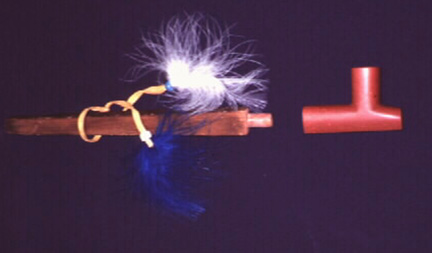 Catlinite pipe made by a contemporary artist

Archival images show a pipe made from what looks like catlinite in a shape that is represented in the archaeological record and is still made today. Contemporary Native American people continue to work catlinite for tribal needs and for commercial sale. Some of the techniques for working the stone remain the same however some of the tools have changed. 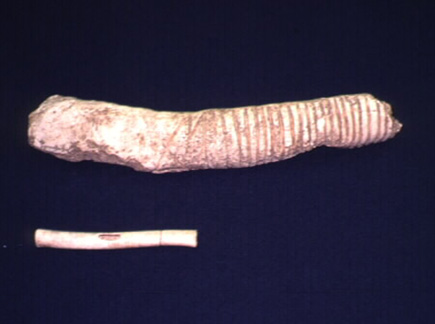 On occasion musical instruments such as rasps and whistles are preserved in the archaeological record. From the artifact alone it is difficult to impossible to know how past people used these objects and what their role was in the culture. The beautiful bird bone whistle is one example made by an artist several hundred years ago. The hollow nature of bird bones makes them an ideal material for whistles. Some decorative incising was added to the outside of the whistle. The rasp may have been made for a variety of purposes including a musical instrument. The rasp is made from the rib of a bison. Today we can admire the beauty of these objects, however speculation about the use and purpose of the object is limited. 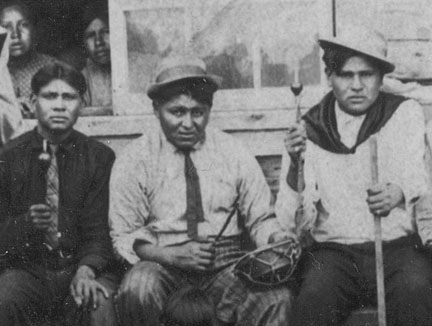 Native American people have continued to make musical instruments such as drums and flutes. This archival image shows the use of a drum and rattles in Native American Church services.

Flute made by a contemporary Native American artist

This example of a flute made by a contemporary artist from South Dakota is the love or courting flute. It serves as an example of a beautiful art object that is also functional. It is made of wood and has decorative carvings and is brightly painted. In traditional times men used the love flute to play only love songs and for courting. Different tribes have a variety of stories that tell how the love flute was given to the people.

The Native American Artists Past and Present web page would not be possible without the assistance of the Ho Chunk Department of Heritage Preservation and funding from the University of Wisconsin – La Crosse Diversity 2008 grant.