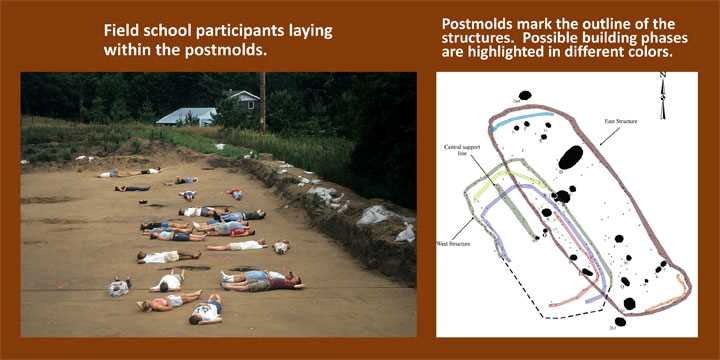 People laying within the postmolds The Meier Farm Site is part of the Sand Lake Archaeological District, and represents a village associated with extensive ridged agricultural fields that have been found nearby. The house structure that was examined in 2003 was one of the very few such structures in the La Crosse area that archaeologists have ever had the opportunity to investigate. The others that we presume existed have all been destroyed by decades of cultivation. This structure was defined by over 300 post holes, small circular stains left when wooden posts decayed. The structure was probably similar to a wigwam, or a long rectangular building.

Most of the cultural remains that were found at the site are characteristic of the Oneota time period, from 1300 to 1625 A.D. In addition, several features were found that had Woodland or grit-tempered pottery probably dating to between 700 and 1200 A.D., suggesting that the location had been occupied multiple times in the past.